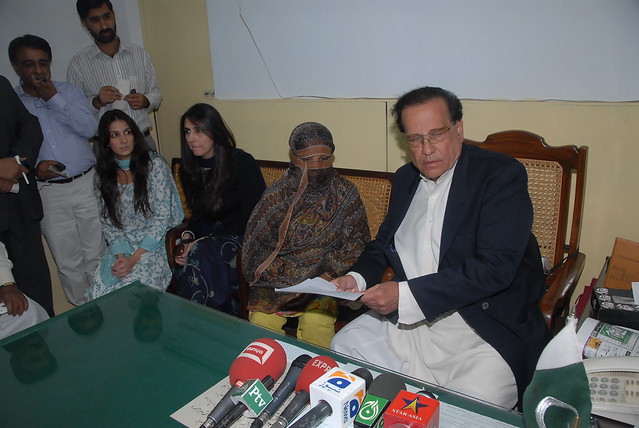 Governor of the Punjab Salmaan Taseer visits AAasia Bibi in jail [2010], Taseer was assassinated in 2011 by one of his own bodyguards. Photo: Flickr

Aasia Bibi, the Catholic woman acquitted of blasphemy after spending eight years on death row in Pakistan, has appealed for justice for victims of the country’s harsh laws.

The 54-year-old left Pakistan in May to be reunited with her two daughters in Canada but she and her family are planning to start a new life soon at a secure, undisclosed European location.

In an interview with Britain’s Sunday Telegraph newspaper, she spoke about how Pakistan's blasphemy laws have left many others still behind bars.

“My whole life suffered, my children suffered and this had a huge impact on my life,” she said.

“There are many other cases where the accused are lying in jail for years and their decision should also be done on merit. The world should listen to them.

Bibi was sentenced to death in 2010 after being accused of insulting the Prophet Muhammad by a group of Muslim women who were angry she had drunk from the same water container as them.

In a landmark judgment, Pakistan’s Supreme Court quashed her death sentence last November and ordered her immediate release from prison.

The ruling, however, sparked violent nationwide protests that came to an end only after the government agreed to stop Bibi from leaving Pakistan until a challenge to her acquittal was heard by the top court. The court, however, upheld Bibi’s acquittal on Jan. 29, allowing her to exit Pakistan.

“Sometimes I was so disappointed and losing courage. I used to wonder whether I was coming out of jail or not, what would happen next, whether I would remain here all my life,” Bibi told the British newspaper.

“When my daughters visited me in jail, I never cried in front of them, but when they went after meeting me in jail, I used to cry alone filled with pain and grief. I used to think about them all the time, how they are living.”

The U.S. State Department says an estimated 77 people are in prison in Pakistan under blasphemy laws, most of them Muslims, with lawyers and rights groups saying false accusations are made to settle scores or silence rivals.

The charge can carry the death penalty but cases can also end in mob lynching. Pakistan has never executed anyone specifically for blasphemy, but trials and appeals can drag on for years because judges are afraid of extremist threats.