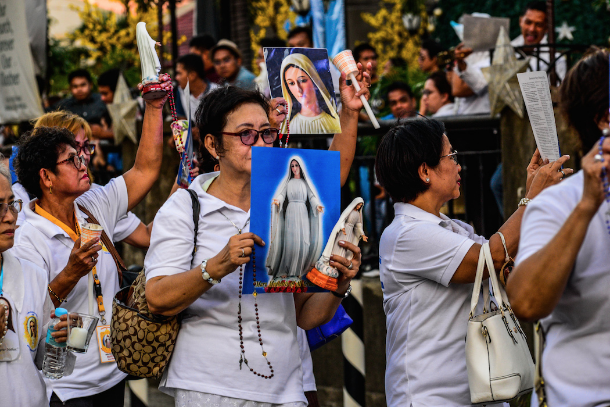 Every year, on Sept. 8, Catholics mark the Blessed Virgin Mary’s "birthday." Unlike Christmas or Easter, however, the day comes and goes mostly unnoticed.

This is reflective of how we Catholics give less importance to the role of Mary in our lives.

St. Anne, the mother of Mary, was told that the Lord heard her prayers and she would "conceive and shall bring forth" a precious gift to the world, the mother of the saviour.

But how relevant is Mary to our world today, in particular to people in the Philippines who are supposedly mostly Catholics?

In the Philippines where respect for the sacredness of life seems to have lost its value, where human rights are grossly violated, where the integrity of creation is disrespected, the significance of the birth of the mother of Jesus is worth pondering on.

In a country where poverty amidst plenty is the order of the day, where the majority of farmers have no power to purchase the rice that they produce, where workers do not have security of tenure, where the urban poor have no secure place to live, how relevant is Mary's Magnificat?

Mary is present among the thousands of Filipino women overseas workers who leave their families behind in search of greener pastures only to pay the high cost of migration manifested among other things in the disintegration of their families.

In shrines and grottoes, Mary’s image depicts an elegant figure that inspires women to turn their "state of victimisation" into empowerment.

In a patriarchal society, the Blessed Mother encourages women to develop their potential and capacities to be in control of their lives.

The Magnificat’s declaration that the Lord will "put down the mighty from their thrones" and "exalt the lowly" is as relevant as ever in the Philippines because of its human rights record.

The purple-wearing Mother of Sorrows, Sorrowful Mother, Our Lady of the Seven Sorrows mirrors the pains of the Blessed Mother.

The image is a parallelism of the ordeal of women who are widowed because their husbands were killed, victims of the government's war on drugs; of wives "half-widowed" with their husbands disappeared, of daughters who lost their fathers.

In a 1988 pastoral letter from the country's Catholic bishops titled "What is Happening to our Beautiful Land? they said that Filipinos have a "deep devotion" to Mary.

"We turn to her for help and protection in times of need. We know that she is on the side of the poor and those who are rejected," wrote the prelates.

"As a mother she is pained and saddened when she sees people destroy the integrity of creation through soil erosion, blast-fishing or poisoning land," they added.

St. Augustine, describing Mary as "the flower of the field from whom bloomed the precious lily of the valley," said the Blessed Mother’s birth was "an event of cosmic and historic significance."

In contemporary times, Columban priest John Leydon, who serves as a missionary in the Philippines, described the Blessed Mother as the "Queen of the Cosmos."

On Mother Mary’s birthday, let us pray, reflect and imitate her virtues and good examples.

Mary Aileen D. Bacalso is a former secretary-general of the Asian Federation Against Involuntary Disappearances. For her commitment to the cause of the victims of enforced disappearances, she received the Emilio F. Mignone International Human Rights Prize in 2013