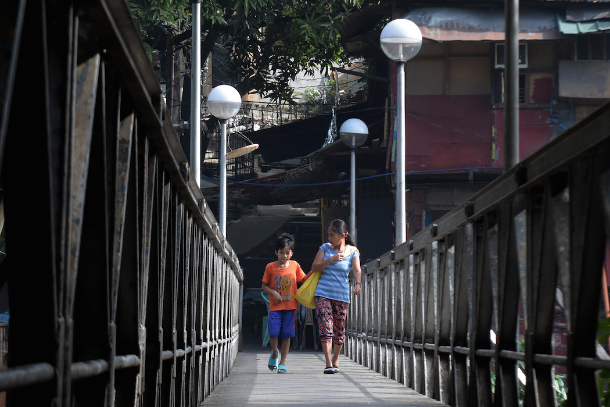 Human trafficking is the most widespread crime against people and is the third biggest earning illicit business in the world after drug trafficking and arms smuggling.

Worldwide, as many as 42 million people are victims — most of them are women and 33 per cent are children.

The earnings are estimated to be US$32 billion a year, according to a report by the United Nations.

Human trafficking is, according to the United Nations, the "recruitment, transportation, transfer, harbouring, or receipt of persons, by means of threat or use of force or coercion ... for the purpose of exploitation."

So bringing anyone to a place where they are exploited by being made to work for very low wages under the control of their boss is human trafficking. Having brought a child from one place to a secluded place and being alone with that child and not being a close relative of the child is a crime under Philippine law.

The trafficker and the receiver of the person being exploited are guilty of violating the law.

An estimated 1.4 million people in India are victims of human trafficking and forced labour. They are trapped in bonded labour usually to pay off a debt. The very poor have to borrow to buy food, to live and to survive for a few more days, and then they can’t find work and are forced to pay off the debt by working for no wages.

In some developing countries, young women are lured and trafficked into the sex industry after they or their parents have accumulated debts. At times, the money is given by traffickers to the parents of these young women, and they are told their salary will be sent to the parents. But most of it never gets there. It is stolen, and the children and parents are always in debt.

Debt bondage destroys lives and turns the poor into the slaves of the trafficker or the owners of the hotel or sex bar where they are sold to work and earn for the owner.

This is the debt trap, a way to get control, power, and ascendency over another person or even a nation. The serious social inequality and the absence of social justice in many nations are the root of poverty and the cause of why so many people are falling victim to human traffickers.

In France, billionaires donated hundreds of millions overnight for the restoration of Notre Dame Cathedral, evidence that they have the money and will get big tax relief for their so-called "donations." The poor are critical of that system where so much is given to a rebuilding fund when thousands live in poverty in a broken, corrupt society.

The poor are gullible, unreflecting and react to the latest exciting news, be it fake or otherwise. They believe it and act on it in an emotional response - not a reflective one.

Then there are these criminals who stalk the land, preying on the vulnerable and the needy. The promises sound so plausible and the poor fall for the lies and deceitful sales talk. They unknowingly sign up to a non-existing job and end up in the human slave market of an insidious dark secret world where the tyrants are gang-masters. It’s like falling into a deep well with no way out.

In the Philippines, UNICEF estimates 60,000 women and minors are victims of human trafficking into the sex trade. Other sources say as many as 100,000 are victims if not many more.

Accurate government figures are rare and Philippine police numbers are very low because few investigations are carried out. The conviction rate is minimal, so the victims, many of them children, go unnoticed or even ignored. International figures are just as elusive.

The traffickers are men and women who can recruit minors even children into begging syndicates or to cyber-sex operators with ease or supply them to sex tourists to be abused. Then it’s all about money, power, domination and control by the sex-starved male tourist. The cyber-sex customer is remote in another country watching a child being abused online and pays by courier.

It is a horrible crime. Both traffickers and the child sex customers are without moral values or conscience and the traffickers and recruiters make a lot of money by tricking, cheating, and luring these young people away from their homes or wherever they live into situations where they are trapped, abused, and exploited.

The human traffickers are sometimes members of a national or an international syndicate or network. The leaders order the trafficking of vulnerable desperate people for cheap or slave labour and then smuggle them across borders into other countries where they work in slave-like conditions.

That is the plight of those in refugee camps. Debt is a crushing force that squeezes the life out of millions of people in an unjust and unequal world dominated by criminals in government and outside of it. Many officials are in collusion with the human traffickers and people smugglers. The people have nothing to sell but their bodies and the bodies of their children. The dirty business becomes sex trafficking and slavery.

So long as there is man-made poverty, injustice oppression and corruption there will be human traffickers and people traders. Many people cry for justice, reform, positive change on a variety of important issues but slavery and human trafficking has to be the top priority.

When we do all we can to advocate and act to protect the children and the poor, we become more human, people of principles and values and we can bring freedom and justice for many victims.

Columban Fr Shay Cullen SSC has been a missionary in the Philippines since 1969 and is the founder of *PREDA (People’s Recovery, Empowerment Development Assistance Foundation)
www.preda.org