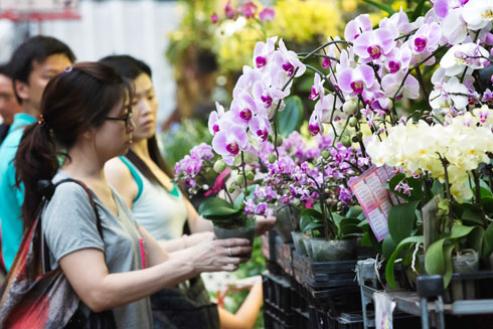 Another custom for the New Year’s Eve is to go to the Flower Market - Photo: istockphoto.com

Disappointed
My first New Year in Hong Kong was a kind of cultural shock for me. I was excited to welcome the New Year, so on December 31 I was prepared to stay up to 12:00 midnight. But later in the night, I noticed most of the Sisters who stayed with me to welcome the New Year. We turned on the TV to see what was happening outside. At 12:00 sharp a few British, Chinese and other nationalities were shown on TV, greeting the New Year with a gun salute and everybody greeted one another: “Happy New Year.” I look out the Window. It was very quite and no fire crackers at all. I was disappointed. I was lonely. I wished I was in the Philippines at that very moment.

New Year in February?
February came and everybody was talking about Chinese New Year. I never knew that there was such a New Year for Chinese. I was curious what could this Chinese New Year be?

New Clothes, New Shoes
Every Chinese household begins to prepare for a new Year the last month of the lunar year. The home must have special cleaning before the New Year begins, and often it will even be given a fresh coat of paint. Traditionally, everyone wears new clothes and shoes during the new clothes and shoes during the New Year Celebration, so shopping must be done for this.

Looking for Good Luck
On New Year’s Eve everyone must go to the parents’ home for the big family meal together. (In Chinese custom the wife becomes part a part of the man’s family, so they naturally go to the man’s parents’ home). However, in the Hong Kong situation, where many people work on New Year’s Eve, a family often chooses, another time to have their big dinner together. It will be very special meal which will include mushrooms; a stringy vegetable that look like hair, because the words hair vegetable sound like the words for prosperity; pigs feet which represents being lucky at winning money in gambling...Everything they eat, use, say or give as gifts symbolizes something good which brings them luck, not only for the new year, but through out the year. The food must be plentiful and some must be left over for the next day to show that the New Year is starting off with plenty and there will be plenty all year.

Worshipping the Gods
It is customary not to sleep on New Year’s Eve night. At exactly midnight the gods and the ancestors must be worshipped. After worshipping the gods and ancestors all children, from the oldest to youngest, will, in turn, serve tea and bow to the parents, thanking them for taking care of them during the past years. I a child is married, the child and his wife will serve the tea together. The parents will give lucky money to the children in turn. Then they will play cards or other games until morning. The next morning the children will again serve tea to the parents and other elders and wish them good health and a happy new year. They will in turn give lucky money to the children again.

Flower
Another custom for the New Year’s Eve is to go to the Flower Market. The Flower Market are set up about two weeks before New Year. Not many people go to buy flowers so early, as they will die before New Year’s celebration. But people go to buy the peach trees and orange trees (they symbolize good luck). After family dinner, they might play cards or watch television and then go to the Flower Market after midnight, that’s then the flowers are very cheap. In the past Flower Markets only had flowers to sell but today, there are toys, foods and many other things so that people can buy things as gifts when they visit relatives and friends.

Red Envelops
The noon meal is called ‘starting –off- the-New Year’ dinner. This signifies the new year has begun. This meal is usually quite early in the day around 10:00 AM. After this the family start visiting relatives to wish them a Happy New Year. A hostess gift is always taken when visiting, originally, these were gifts, fruits or homemade steamed cakes. Nowadays it is fruit or boxes of candy or cookies. Married people must carry many of the red envelops of lucky money to give to the children.

Changing Attitudes
When visitors arrive at home, the first thing the hostess does is to pour a cup of tea for the guests. The usual new year’s snacks are served: steamed cake, fried dumplings, preserved fruits and melon seeds. Usually, every home must have at New Year, the traditional box sweet for people to eat when they come to visit. Traditionally, this consisted of dried louts seeds, coconut strips and melon seeds. Today, they have also chocolates and candies because some people (especially the young people) do not like to eat traditional sweets.

Two Weeks Long
Chinese New Year lasts for 15 days ( if I remember it right) and so visitation and celebration continue until the last day or the fifteenth day of the of the new year.

Lost and Found
I was disappointed to lose the Filipino Bagong Taon celebration but my new land made up the loss a hundred fold.