Columban Message on 75th anniversary of Hiroshima and Nagasaki 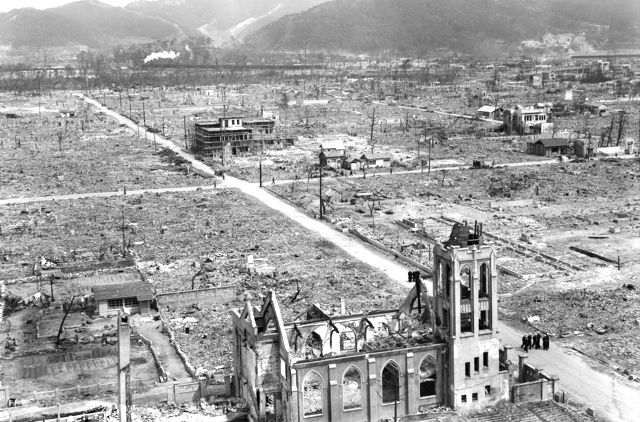 A section of the bomb-damaged ruins of buildings, looking south from the centre of the city of Hiroshima. Photo: Australian War Memorial/ Public Domain

2020 marks the 75th anniversary of the atomic bombings by the United States of the Japanese cities of Hiroshima (August 6) and Nagasaki (August 9).

By the end of the year, 1945, more than 210,000 people, mainly civilians, were dead. Those surviving the bombings (Hibakusha) and their children continue to suffer the physical and psychological impacts of the bombing and radiation.

Pope Francis, on his visit to Hiroshima and Nagasaki in 2019, issued an urgent plea to the world:

“Here, in an incandescent burst of lightning and fire, so many men and women, so many dreams and hopes, disappeared, leaving behind only shadows and silence … The possession of nuclear and other weapons of mass destruction is not the answer to one of the deepest longings of the human heart for security, peace and stability …

In a world where millions of children and families live in inhumane conditions, the money that is squandered and the fortunes made through the manufacture, upgrading, maintenance and sale of ever more destructive weapons are an affront crying out to heaven.”

On this 75th anniversary of the atomic bombings, the Missionary Society of St Columban reaffirms the commitment we made at the height of the Cold War when we declared at our 1982 General Assembly:

Our understanding of Christian Discipleship leads us to condemn in strongest terms defence policies that every day make life more insecure. The most blatant of these are present policies of nuclear armament which threaten all life. These policies are themselves a form of killing since they consume resources desperately needed to meet basic human needs.[1]

As Columbans, we express our deep desire and hope for healing and reconciliation among and within nations, and we urge political and civic leaders of every nation to:

Today, our missionary presence in many countries in the world continues to bring us into a relationship with people and their anguish who have already suffered from the use of nuclear weapons, and the anxiety of those who see their hopes frustrated by the misappropriation of the world’s resources.

As members of Pax Christi International-Catholic Nonviolence Initiative and local Pax Christi chapters throughout the world, we join millions of Catholics calling for an abolition to nuclear weapons. We affirm, too, our commitment to active nonviolence as a Gospel path to conversion, as we continue the work for peace and reconciliation among the nations and peoples of the earth.

In closing, we offer this prayer,

[1] Acts of the Columban 1982 General Assembly, statement on Nuclear Weapons