Columban Ministry to Haitians in Chile 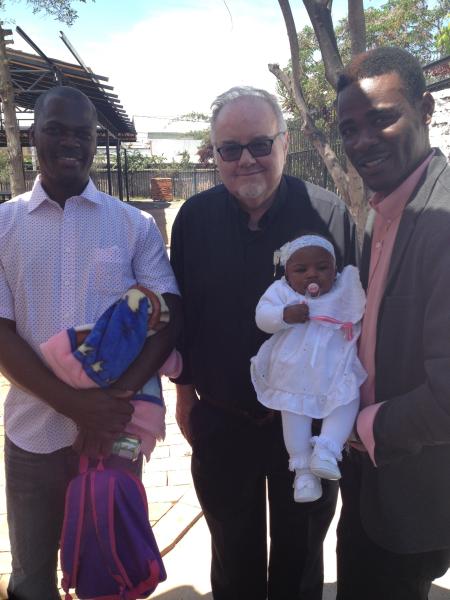 Smith and Jeff, two Haitian parishioners, are stuck 400 kilometres south of Santiago, due to COVID-19 where they went to pick grapes - Photo: Fr Dan Harding

Koman ou ye - How are you doing?

Walking around the streets of our Columban parishes in Chile, it is now very common to hear being spoken, “kreyòl ayisyen” -- Haitian Creole. In the Santiago parish of San Columbano alone, it is estimated that over 1000 Haitians are now residents there. They generally live in overcrowded, shoddy, boarding houses, often paying overpriced rents.

All of us Columban missionaries in Chile, who have come from other countries, have had to learn to speak Spanish, the language of Chile, to be able to function here.

Our big new Columban challenge, however, is to start learning Haitian Creole, at least to be able to hold a conversation in Creole. This is a significant challenge for us three priests and all our lay leaders in San Columbano parish.

Our goal has been to set up our parish Haitian Ministry, which will include the celebration of the Sunday Eucharist in Haitian Creole every Sunday, with a large energetic, joyful choir and congregation.

Until the pandemic arrived, the parish was already offering night classes for Haitians to be able to obtain a Chilean High School Certificate, which will open many doors to a much wider range of employment opportunities, including the possibility of obtaining a driver’s licence

We were also preparing to offer Spanish classes at night, to help the Haitians integrate better into Chilean society and workforce.

For us to be able to converse in Haitian Creole shows respect for the language, history, culture and dignity of the Haitian people. It is our way of valuing the lives and lived experience of our Haitian sisters and brothers, migrants to Chile.

The Haitian parishioners are pleased and delighted when they see our efforts, often full of mistakes, to learn their language. Their faces light up with huge smiles.

Chile and Haiti are both members of the Organization of American States. Chilean peacekeeping troops, as part of the United Nations Peacekeeping Mission in Haiti, were first sent there in 2004, after severe floods. The major peacekeeping Chilean force, however, was sent to Haiti after the devastating 2010 earthquake.

In the decade following the earthquake, during the bonanza years of economic growth, Chile opened its doors to Haitian and other Latin American migrants. By the endo of 2019, Chile had 1,492,522 migrants out of a total population of 18,729,160 persons.

Haitian migrants came to Chile, during the bonanza years of Chilean economic growth, looking for better economic opportunities, that are not available in their own poverty stricken nation. They came with great expectations but at a considerable disadvantage. They could not speak Spanish and due to frequent civil unrest and natural disasters, many have a low level of education.

This means the great majority of Haitian men find employment in temporary jobs in construction or other labouring positions, such as on process lines in factories. It is for their “muscle” and not for their “education” achievement, that the Chilean economy has been able to absorb many Haitian men in labouring jobs. They work for several months on a building site, then become unemployed when the job is completed and then try to find another job at another building site.

Difficulties with obtaining permanent residency, or work visas and/or even extending their temporary visas, as well as the inability to speak Spanish and understand government employment regulations, means that Haitian workers are often underpaid, overworked and exploited in the labour field.

Haitian women, often with babies and small children, often find employment in open markets selling fruit and vegetables and other small products. They are now a feature of the three large open area markets in our parish area, usually setting up stands on the edge of commercial activity.

Haitian migrants to Chile often complain about racism and abuse from some of the people of the area. Unlike other Latin American migrants to Chile, the Haitians being of African descent, and speaking in a different language, really stand out in a crowd.

Challenges of our parish Haitian ministry

The parish of San Columbano is in the process of developing our outreach ministry to our Haitian sisters and brothers living in our midst. Many of our efforts have been interrupted by the Pandemic. Nevertheless, our goals of helping them learn Spanish and we ourselves learning conversational Creole remain in place. We look forward to our Sunday Eucharist in Creole.

We have already reached out to offer concrete support for victims of several cases of domestic abuse, violence, criminal activity, alcohol and drugs abuse and mental illness within the Haitian community itself. We have a special emergency shelter set up in the parish for Haitian women and children, victims of domestic violence. This shelter is usually occupied by different victims, as it is currently.

We also offer legal and professional advice to Haitians with regards to residency visas, labour laws and the health care system. We accompany them to government offices and hospitals when needed. We have also provided emergency food, clothing and rent support during this time of great unemployment, due to the pandemic.

We Columbans and lay parish leaders are only beginning with our Haitian Ministry, but we are already making a difference. The Haitian community is also teaching us so much about how to live our Catholic faith and what human relationships are about.