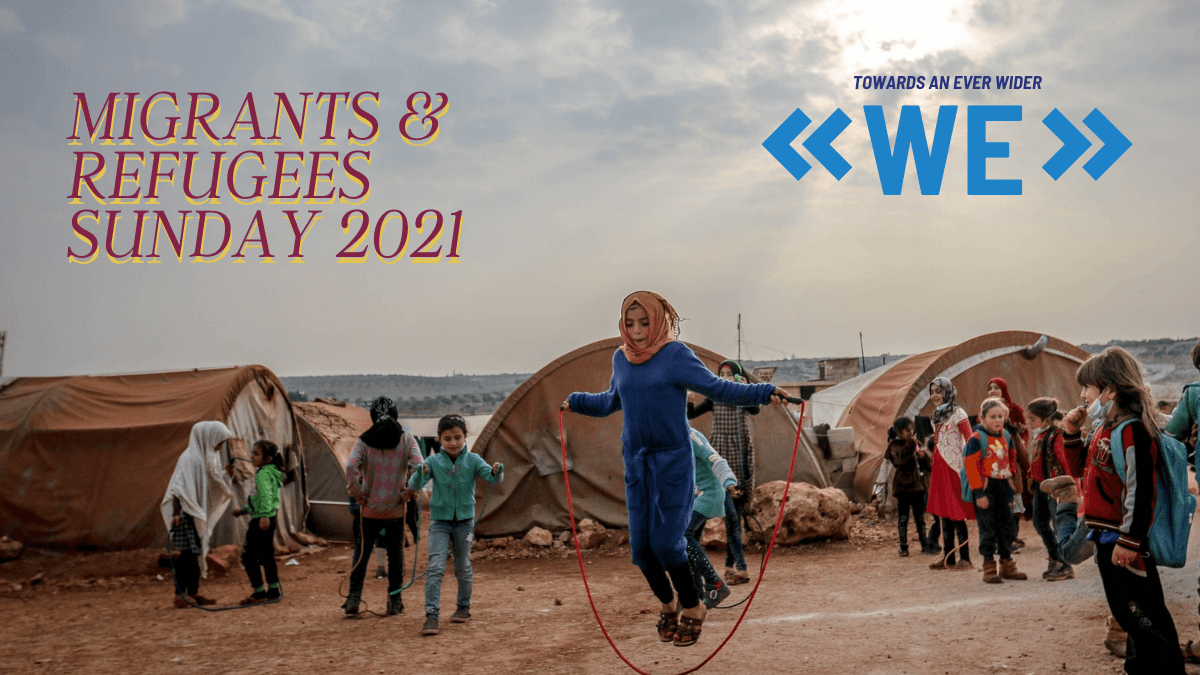 The 107th World Day of Migrants and Refugees 2021 will be celebrated on September 26th – Migrants and Refugees Sunday. In his Message, Towards an Ever Wider “We” for this year’s World Day of Migrants and Refugees, Pope Francis turned to his encyclical Fratelli Tutti to express once again his concerns and hopes during this time of the COVID19 pandemic: “Once this health crisis passes, our worst response would be to plunge even more deeply into feverish consumerism and new forms of egotistic self-preservation. God willing, after all this, we will think no longer in terms of ‘them’ and ‘those’, but only ‘us’ (no. 35)”. For this reason, the Pope said he has devoted his Message to the theme, Towards An Ever Wider “We”, in order to “indicate a clear horizon for our common journey in this world.”

“Our ‘we’”, says Pope Francis, “both in the wider world and within the Church, is crumbling and cracking due to myopic and aggressive forms of nationalism and radical individualism,” and, “the highest price is being paid by those who most easily become viewed as others: foreigners, migrants, the marginalized, those living on the existential peripheries.”

Being members of the Catholic Church, says the Pope, “entails a commitment to becoming ever more faithful to our being ‘catholic’.” “The Holy Spirit enables us to embrace everyone, to build communion in diversity, to unify differences without imposing a depersonalized uniformity. In encountering the diversity of foreigners, migrants and refugees, and in the intercultural dialogue that can emerge from this encounter, we have an opportunity to grow as Church and to enrich one another”.

“The encounter with migrants and refugees of other denominations and religions,” says Pope Francis, “represents a fertile ground for the growth of open and enriching ecumenical and interreligious dialogue.”  Furthermore, he says, “today’s migration movements offer an opportunity for us to overcome our fears and let ourselves be enriched by the diversity of each person’s gifts. Then, if we so desire, we can transform borders into privileged places of encounter, where the miracle of an ever wider “we” can come about”.

Pope Francis urges us to see and respond to the plight of millions of people across the world who are forced to flee their homeland due to the catastrophic effects of climate change. In April this year, the Holy See released new Pastoral Orientations on Climate Displaced People, a pastoral plan for how parishes, dioceses and national churches can respond to the emergency of people who have to flee their homes due to climate change.

In the preface of the document (see below), Pope Francis says the increasing numbers displaced by climate crises are fast becoming “a great emergency of our age”. The Pope says, “Many are being devoured in conditions that make it impossible to survive. Forced to abandon fields and shorelines, homes and villages, people flee in haste carrying just a few souvenirs and treasures, scraps of their culture and heritage. They set out in hope, meaning to restart their lives in a place of safety. But where they mostly end up are dangerously overcrowded slums or makeshift settlements, waiting on fate.”

What actions do we, the church, need to take to respond to the present day reality of climate displaced people? Pope Francis says, “Those driven from their homes by the climate crisis need to be welcomed, protected, promoted and integrated. They want to start over. To create a new future for their children, they need to be allowed to do so, and to be helped”. “Welcoming, protecting, promoting and integrating, are all verbs of helpful action,” says Pope Francis. “Let us remove, one by one, those boulders that block the way of the displaced, what represses and sidelines them, prevents them from working and going to school, whatever renders them invisible and denies their dignity.”

Until the conditions in the countries of origin for those considering fleeing allow them to remain at home in safety and to support their families, the Vatican Pastoral Orientations say,  “we are obliged to respect the right of all individuals to find a place that meets their basic needs and those of their families, and where they can find personal fulfilment”.

Within our region, climate change is having a severe impact on Pacific Island nations. There has already been forced migration of people who cannot live in their homelands due to rising seas, extreme weather events, and impacts on local food sources. In Australia, the livelihoods of Torres Strait Islanders are also threatened. Scientists warn that in coming decades their Traditional lands will be uninhabitable.

Columban missionaries support and advocate for the rights of migrants and refugees in the countries where we live and work across the world. Together with local churches, we have established Migrant and Refugee Centers as well as shelters and houses of hospitality where those seeking assistance find a warm welcome. In Melbourne, Australia, St Columbans Mission Society networks with the Brigidine Asylum Seekers Project (BASP) in providing accommodation for refugees and people seeking asylum. We have two buildings which are no longer used as residences for our priests. For the past number of years we have been able to provide accommodation for six single men in one building, and accommodation for a family in another. Once they are able to secure regular income they then have the means to move into their own rental properties. This is the aim for people with the permission and ability to seek work.  Others are not in that position and continue to face homelessness if not assisted.

Holy, beloved Father,
your Son Jesus taught us that
there is great rejoicing in heaven
whenever someone lost is found,
whenever someone excluded, rejected
or discarded is gathered into our “we”,
which thus becomes ever wider.

We ask you to grant the followers of Jesus,
and all people of goodwill,
the grace to do your will on earth.

Bless each act of welcome and outreach that draws those in exile
into the “we” of community and of the Church,
so that our earth may truly become what you yourself
created it to be: the common home of all our brothers and sisters.

Fr Kevin O’Neill is a member of the Peace, Ecology and Justice office at the Columban Mission Center, Essendon.