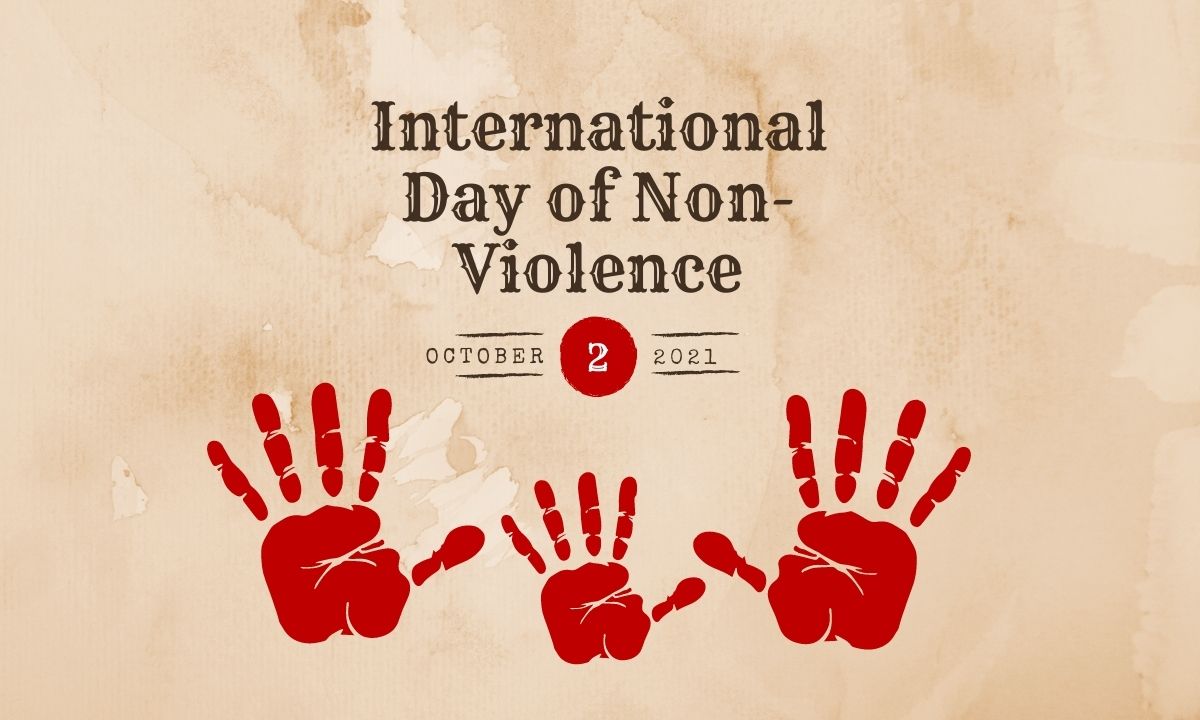 The United Nations International Day of Non-Violence is observed on 2 October, the birthday of Mahatma Gandhi.  Established in June 2007 the International Day is an occasion to disseminate the message of non-violence, including through education and public awareness, affirming the universal relevance of the principle of non-violence and the desire to secure a culture of peace, tolerance, understanding and non-violence. Mahatma Gandhi said: “Non-violence is the greatest force at the disposal of humankind.”

Modern popes have been clear voices for peace. Pope Francis has urged each and every person to recognize that there is something they can do to promote peace. Furthermore, he has stated clearly that, “indifference is an accomplice of war.”

In his Encyclical Fratelli Tutti, on Fraternity and Social Friendship,Pope Francis questioned whether in modern warfare any conflict could be judged a “just war” because proportionality and the protection of civilians seem to be difficult if not impossible to guarantee. In his encyclical Pope Francis says, “We can no longer think of war as a solution because its risks will probably always be greater than its supposed benefits,” one of the criteria of just war. The Pope says, “In view of this, it is very difficult nowadays to invoke the rational criteria elaborated in earlier centuries to speak of the possibility of a ‘just war’. Never again war!”

Pope Francis reflects on the scene in the gospels when Jesus is about to be arrested. When a disciple drew a sword to defend him Jesus said: “Put your sword back into your sheath.” Pope Francis says, “Life and goodness cannot be defended with the ‘sword’.” In the gospel of Luke, the story is told with the words of Jesus to his disciples, “Stop, no more of this!” Pope Francis says, “Jesus’ sorrowful and strong, ‘No more,’ goes beyond the centuries and reaches us. It is a commandment we cannot avoid.” Moreover, says the Pope, “‘No more’ swords, weapons, violence, war. In that ‘No more’ there is an echo of the ancient commandment, ‘Thou shall not kill.’”

Let us continue to pray for peace in our world so that the words of Pope Francis, “Never again war!” will one day become a reality.

Pope Francis says, “conflicts are prevented with the daily search for fraternity.” On this year’s International Day of Non-violence let us continue to build bonds of fraternity within the human family, celebrating our unity in diversity as people of different nations, ethnicity and faith traditions. Let us hold close to our hearts the words of Pope Francis when he says, “peace starts with not hating, not excluding, not discriminating against, not leaving anyone on their own.”

Columban missionaries for over a century have accompanied the people among whom we live and serve through times of conflict and war. We stand side by side with the local people in their non-violent protests against all forms of injustice.

Columbans continue to accompany the people of Myanmar during these ongoing months of unrest. For many years now, with the support of our benefactors, we continue to assist with the daily needs and education of children and youth who are living in refugee camps having fled, with their parents, from the safety of their homes because of years of conflict and unrest in the Kachin State in the northern area of Myanmar. After brutal terrorist attacks on churches in Pakistan, Columban missionaries have comforted and supported the people. In Korea, Columbans have for many years, together with local people, protested the building of a new naval base that not only threatens the marine environment where it is being built but also the lifestyle and well-being of the people.

Let us continue to pray for peace in our world so that the words of Pope Francis, “Never again war!” will one day become a reality. Prayer is essential says Pope Francis: “To pray is to protest war in front of God. Never stop asking the Lord with faith and insistence for the end of conflict.” “Our prayers,” says Pope Francis, “give voice to the lament of the people.”

We pray that non-violent protests against all forms of injustice, as we see in the streets of Myanmar, and all across the world, will bring about a just world for all.

Columban Fr Kevin O'Neill is a member of the Peace, Ecology and Justice office at the Columban Mission Center, Essendon.