The inspiring tale of three sisters 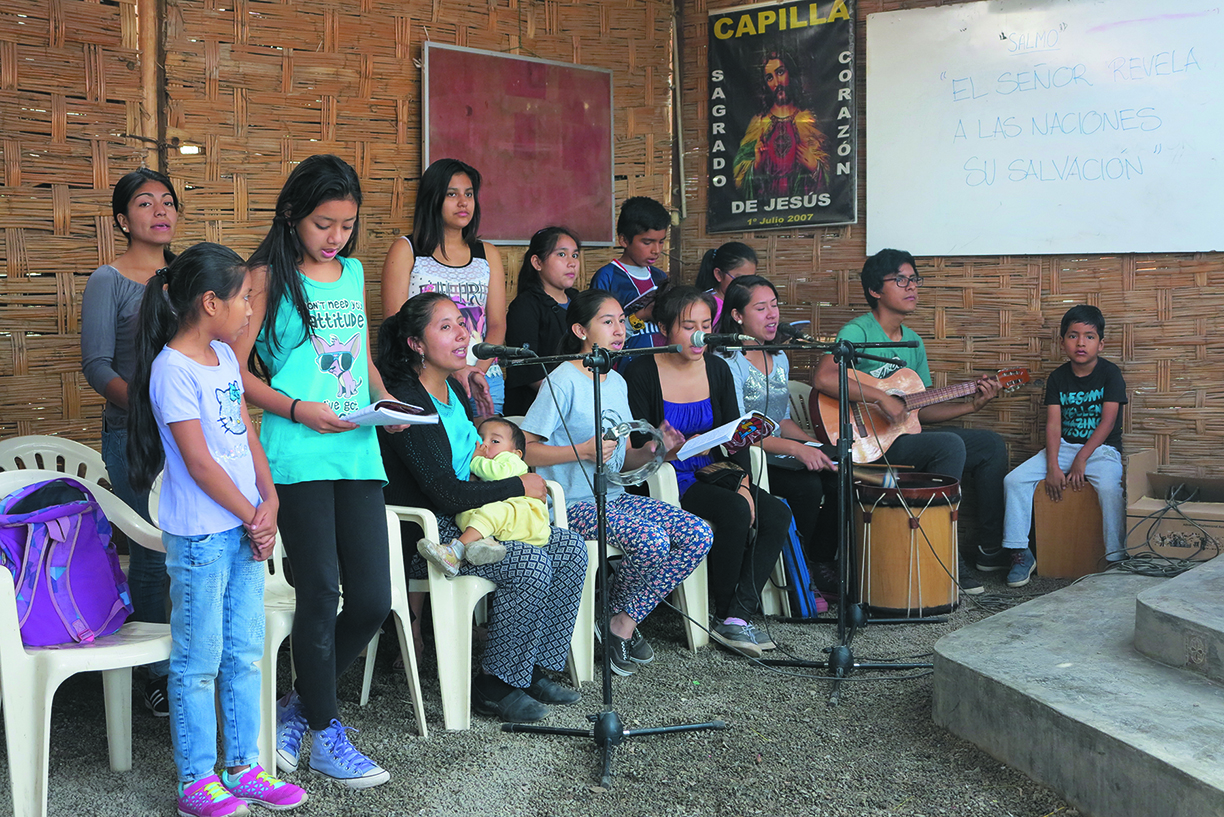 The faithful at Santa Rosa chapel in Lima might at times feel they are suffering from double vision. First, out comes 25-year-old Anelli Guerrero who serves as a Eucharistic Minister, ready to preside at the Sunday lay-led liturgy. Then up pops carbon-copy sister Lesly, who reads the Gospel and explains it in a brief homily.

Mind, it used to be worse in the days when look-alike elder sister Isabel led the choir and the singing, before she got married and moved away to be a driving force in another Columban parish.

When together, they were often known as Las Tres Doncellas, or "The Three Little Maids." If this conjures up images of the enchanting characters from Gilbert and Sullivan's "Mikado" singing "Three Little Maids from School," then you wouldn't be far wrong. They ARE enchanting, and have a faith and personality which have inspired young and old alike.

Much of the credit must go to their parents, Juan and Gloria. I first met them soon after my arrival in Peru in 1994. They were from humble backgrounds but had managed to qualify as engineers, and had decided to set up home in a newly developing area on the teeming northern edge of the greater Lima conurbation.

"We built our house ourselves, bit by bit," remembers Gloria. "There was no electric light, no paved roads, no running water. We drew water with a rope and bucket from an old well, left over from the days of the haciendas, (the neo-feudal estates which were abolished in the 1970s). "When we started out, our youngest daughter Isabel was one month old. We used to walk over two kilometers (about 1.5 miles) to church each Sunday, carrying her." It was a church run by the Columbans where I was the priest. That was how I got to know Juan and Gloria and their lovely daughters.

We soon recognized the couple's potential as future catechists and Eucharistic ministers. It has always been Columban policy to encourage able and devout lay people to take leadership roles in our parishes. Indeed, the parishes could not function without them. By 1998 we were just two priests in an enormous parish of twelve churches and chapels. Fellow Columban Fr. John Hegerty and I would celebrate Mass in each community every second Sunday, while lay ministers would lead the liturgy and distribute Holy Communion on the other Sundays.

Juan and Gloria became two of these ministers. The people readily accepted Juan, but in a maledominated "machista" culture it was more difficult for Gloria. "They didn't approve of a woman leading a Eucharistic service," recalls Gloria. "They didn't listen to my homilies. They wouldn't come to me for Communion." But we - and Gloria - persisted. Slowly, attitudes changed, as people noted the sincerity and capabilities of Gloria and the other women ministers we were appointing.

Soon, Gloria was not only a regular Eucharistic minister but, along with husband Juan, elected coordinator of their Christian Community. They joined the parish council and later were named missionaries, helping the Columbans evangelize yet newer areas that were springing up on the periphery of the great city. 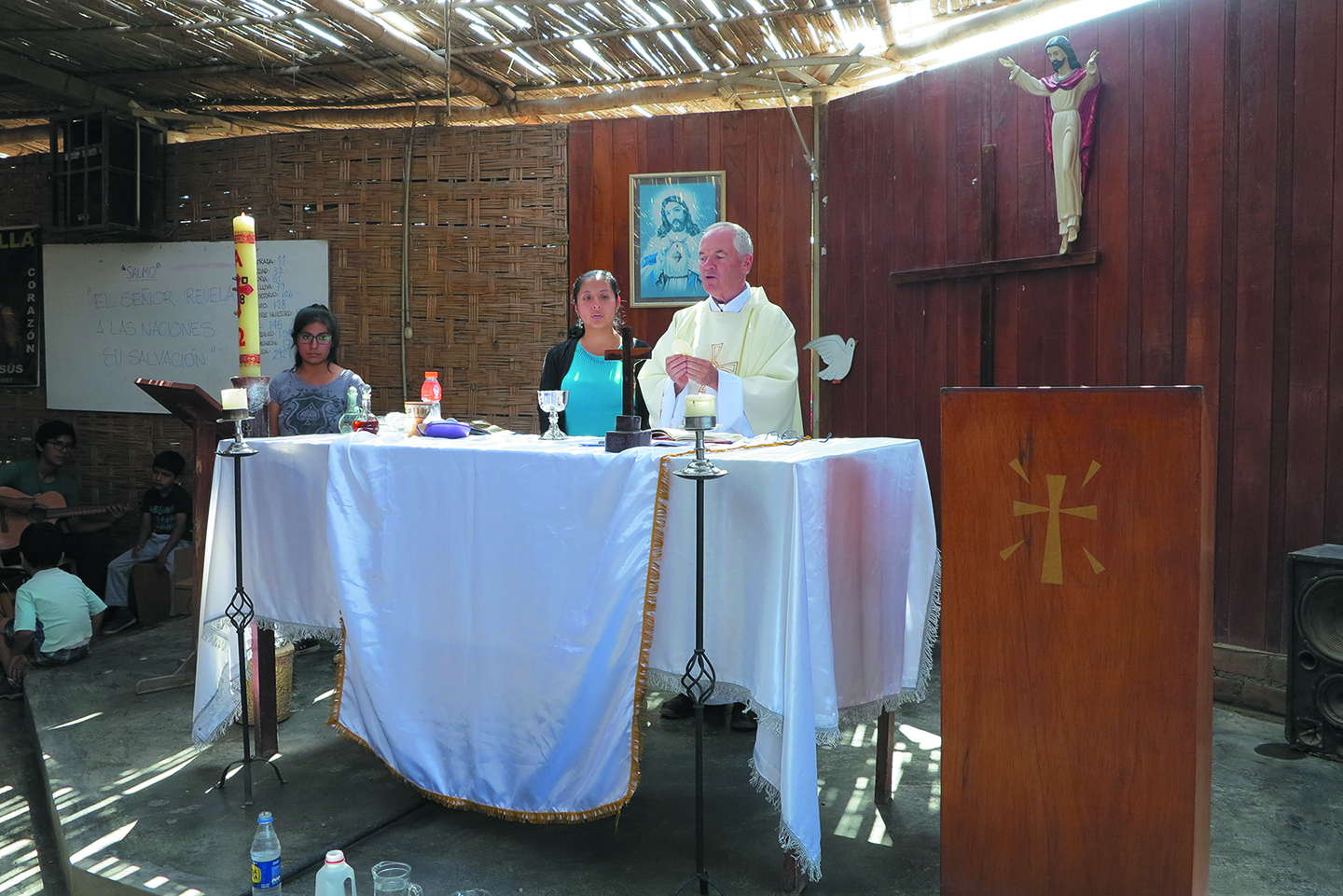 Meanwhile, daughters Isabel, Lesly and Anelli were proving to be "chips off the old block." They ended up following in their parents' footsteps professionally - Isabel as a chemical engineer, Lesly as an industrial engineer, Anelli as textile engineer - and pastorally. Isabel specialized in the choir and, after getting married, moved to another Columban parish where she and husband Israel singlehandedly revived a flagging Christian community. Lesly thrived in various pastoral roles and is now a Minister of the Word. Anelli became the parish's youngest ever Eucharistic minister. Happily, she didn't have to face the prejudices encountered by her mother. People's views had changed, thanks to the pioneering work of women like Gloria.

On the occasions when Isabel returns to her former chapel, the sisters are reunited and once again for the parishioners it's a case not of double but triple vision. These are special moments. They remind you that the Church is built on the foundations of people like the "Three Little Maids" and the inspirational examples of parents.

The tale of the "Three Little Maids" nearly came to premature and tragic end on June 3, 2001. Eight-year-old Anelli came back from First Communion class and was playing on the upstairs veranda when a parapet gave way and she fell three stories to the ground. Bleeding and unconscious, she was retrieved by an ambulance but, as bad luck would have it, this was the day of a general election in Peru, at a very turbulent moment in its history. There was a security clampdown, and three hospitals turned Anelli away before the fourth finally admitted her.

Miraculously, she only suffered a concussion, a broken arm and broken fingers. Even more miraculously, the fingers knitted together in record time, surprising the doctors. While in the hospital Anelli made a name for herself, encouraging fellow child patients and their parents with themes she'd leaned in her First Communion class. She became known as la pequeña sacerdotisa or "the little priestess!"

Columban Fr. John Boles has worked in Peru since 1994.