The presence of genetically engineered foods in our lives is a reality we need to face. I set before you life or death, blessing or curse. Choose life, then, that you and your descendants may live. Deut 30:19

Columban missionaries preach the Gospel within the life situation of their hearers. A new and often hidden issue for people and the environment is the production and consumption of genetically modified foods.  Scientists speak about Transgenic Technologies and Recombinant DNA. Agricultural-chemical companies use the softer wording of Genetically Modified Organisms (GMOs). Because justice and spiritual issues inherent in Transgenic Technologies are at stake, Columbans favour the harsher words Genetic Engineering (GE).

In developing countries Columbans have seen the plight of farmers seduced into growing transgenic crops, tribal communities robbed of their local genetic riches through patenting laws, and the loss of diversity in native food species through GE contamination. These people look in vain to the WTO for protection. All this runs counter to the Gospel of Life.

In Australia consumers are being denied proper labelling on food and so denied an informed choice about what they buy and eat. Government appointed food safety regulators do little independent testing, and sanction some level of GE contamination in foods.

Australian farmers are losing out as crops are contaminated with GE seed, often coming from so called GE trial-plots. The MAGIC wheat project in Western Australia has gone beyond gene-marker identification to creating GM wheat. Its trial plots could genetically contaminate all wheat crops. The government regulator of GE crop commercialisation has allowed some crops but is failing farmers who bear financial loss as their contaminated grain loses premium overseas markets. Organic farming is destroyed by GE contamination.

Health professionals are concerned about the impact of GE technologies. There are no long term trials on GE foods before their commercial release as is the practice with medicines. Little research is being done to verify stories of allergy and intestinal problems coming from countries which are further down the GE track.

In addition, scientists fear the spread of viruses and increased antibiotic resistance because of processes inherent in GE technology. Development aid-workers fear world hunger as the diversity of food sources and seed pools grow smaller in industrialised-style farming if GE comes to dominate.

Many myths, possibly lies, are spread to promote GE foods. Biotech companies have used their PR machine even to fool the Vatican on the premise that it will feed the world’s hungry. There is no evidence of greater yields from GE crops. It is false to believe GMOs will feed the world - money to buy food is the main issue, not crop yield. Claims for decreased chemical use do not match the reality that crops quickly become resistant so that harsher chemicals have to be used or a new crop strains developed. Farmers become slaves to seed companies on this treadmill.

A Columban produced DVD on GMOs asks, where is the push for GE technologies in food production coming from? The simple answer is that it is a move by global agri-chemical companies to control the world’s food supply through a monopoly that undermines alternative sources. They even patent plants and organisms that they have not developed or which nature provides free. The DVD forms a point of dialogue with church social justice groups and secular campaigners such as Gene Ethics, Concerned Farmers and Greenpeace. 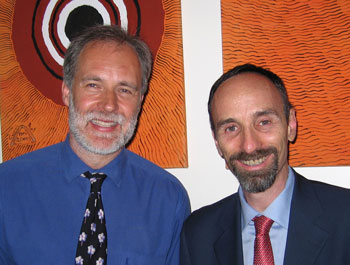 Addressing 50,000 Italian farmers in Nov. 2002, Pope John Paul II said: ... resist the temptation of high productivity and profit that work to the detriment of the respect of nature … when (farmers) forget this basic principle and become tyrants of the earth rather than its custodians ... sooner or later the earth rebels.

The Gospel calls for a response. Be organized. Gather a group and watch the Columban DVD; discuss how GE food affects you; judge the situation; decide on some action; and gather again to review your action and decide on a new action as an ongoing response.

Parents and grandparents, farmers and consumers, voters and government officials, business people, professional economists and lawyers, teachers and students, medical professionals, those worried about foreign aid policies - any group in fact can learn about GE food, reflect, and lobby to minimise its impacts. We pray in the Creed honouring The Holy Spirit, the Giver of Life. Also Scripture helps, Beware of false prophets ... You will be able to tell them by their fruits. Mt 7:15

Life is a central word for Christians. An alarming development in genetics is the creation of a terminator gene. It makes plants sterile. This is an affront to the God of life by biotech companies which want to use it in a cynical effort to protect their income from patenting seeds.

The medical field is also using gene technologies for healing purposes. While some gene manipulations eventually die with the patient, other treatments change the genetic makeup of the person and it is likely that these GE traits can be passed on through their children. This aspect needs greater scrutiny by Catholic and other medical ethicists.

The constant message of Columban JPIC has been to promote awareness and give reasons for supporting precautionary legislation. The correct use of biotechnology is a faith issue.