Saints back in fashion 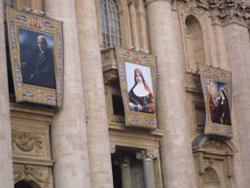 The extraordinary turnout of pilgrims to the Canonisation of St Mary MacKillop and five other saints last week has led the Vatican’s spokesman, Fr Frederico Lombardi to declare that saints are back in fashion.

The Zenit news agency reports that Fr Lombardi, director of the Vatican's press office, reflected on the canonisations during the most recent episode of the weekly Vatican Television program "Octava Dies."

He noted that the canonisations were a "a little special. Two of the new saints in particular generated a special interest in their countries."

The two saints he was referring to included the first Australian saint, Mary MacKillop, and the first male Canadian-born saint, André Bessette. "The other saints were Italians, a Spaniard, and a Pole, ... so -- although very great -- were not an absolute novelty," he said. "But Australia has never had a saint before, and Canada too has had little familiarity with canonisations."

"Groups of thousands of pilgrims endured very long and costly voyages to be present in St. Peter's Square," Father Lombardi continued. "Many journalists and television crews came to Rome to write articles, film, do interviews directly at the ceremony and the other celebrations.
"Usually the media get moving when they grasp that there is ample and widespread popular interest."

Father Lombardi continued: "The Church solemnly proposes models of Christian life with the saints, but it does so while recognising that the people, above all, have already understood this, that certain persons incarnate the Gospel with extraordinary exemplarity, and thus become the spiritual friends of those who encounter them, fascinating guides in the love of God, in faith, in hope. "Canonisations are the recognition that God's Spirit breathes in ordinary people such as Mary and Brother André, and bears fruits of virtue that are a source of comfort and light for so many others.

"Some saints are solemnly recognised; the great majority do not become universally famous, but equally spread faith, hope and love about themselves," he added. "This is the most beautiful side of the Church.
"In the Church, everything is at the service of men and women of every country and condition, to enable them to meet God journeying along the paths of sanctity," the spokesman explained.

He urged, "Let us learn to see the Church in this perspective and continually renew her, beginning with ourselves."