Maybe Mass is Not so Boring After All

A Fijian priest demonstrates how the Eucharist can be used to sooth wounds of prejudice and mistrust.

“MASS is boring. Why should I go?” This has been a recent refrain in the Western world. Mass readings and homilies seem wordy. Organ music and Church hymns conjure up a past age, incomprehensible to modern tastes and rhythms. They are not cool. 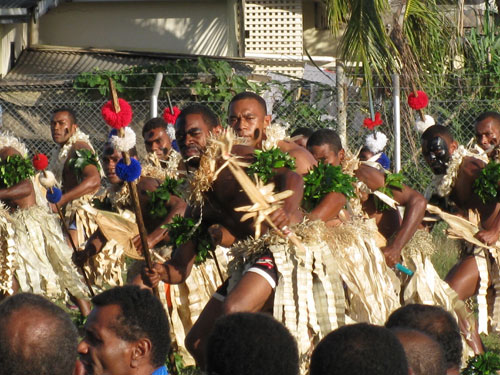 But Mass need not be a museum piece from the past. When we join with others on the side of life in the struggles of the world around us, we rediscover a need for ritual and symbols. We yearn for an experience of ultimate truth to give hope and meaning to our efforts. We need worship and religious celebration. Take Fiji for example.

Life in Fiji is blighted by ethnic prejudice and, at times, by open conflict and violence. A communal indigenous Fijian people and a more individualist and vulnerable ethnic Indian community of similar size feel threatened by each other.

Military coups in 1987 and 2000 tore asunder the façade of democracy that existed since Fijian independence from Britain in 1970. The coups have left a legacy of criminality, distrust and demoralisation.

The Catholic Church, with 10 percent of the population, is challenged to be a leaven in this volatile situation. Its leader, Archbishop Petero Mataca, the first ever-indigenous Fijian bishop, has spoken out against misuse of Scripture by extreme Fijian nationalists.

He has spoken at religious gatherings of Hindu Indians and sympathised with them when temples were vandalised. He demonstrates the necessity both of challenging our own culture and respecting other cultures.

Fr Kusitino Cobona, a Fijian priest, is another such catalyst of respect and love. He learned the Hindi language as a seminarian and lived for months with an Indian family.

He came to understand and appreciate the hospitality, spirituality and diligence of Indian people by sharing in their worries and hopes. He began to see life in a new way -through their eyes.

After ordination, Fr Kusitino learned to sing the Mass, with great feeling, in Hindi. He learned to incorporate into the Mass the Indian symbols of profound bows, placing flowers in the eight directions around the offertory gifts, using lighted camphor in a brass tray to bestow God’s blessing.

When Fr Kusitino sings Mass in Hindi with Indian cultural adaptations, it touches the hearts of both Indians and Fijians.

Fijians are proud of Fr. Kusitino and surprised by the solemnity of the sung Hindi Mass - a solemnity that reminds them of their own cultural rituals of respect. Indians are touched to the core by the Mass celebrated in their own cultural idiom with such respect and sensibility.

The Mass draws them into a deep feeling of inner communion with the mystery of God. It amazes them that such as Mass is mediated by a Fijian, someone they would least expect to know or care for their religious sensibilities. I have seen elderly Indian ladies seek out Fr Kusitino after his Masses to embrace him tenderly.

The Hindi Mass celebrated by Fr  Kusitino symbolises and effects reconciliation between antagonistic races. St Paul perceived this as one of the fruits of Christ’s sacrifice on the cross. “By His death on the cross, Christ destroyed their enmity; by means of the cross, He united both races into one body and brought them back to God” (Ephesians 2:16).

The Eucharist offers us an opportunity to participate in the sacrifice of Calvary. It is the banquet of peace and reconciliation for all nations, races and peoples. We live in a world where people are travelling and intermingling as never before. But discrimination, inequality and terrorism are signs of our times.

The intercultural Eucharist in Fiji shows us how life must be brought to the Eucharist and how such a Eucharist is a challenge and a catalyst for reconciliation in ordinary life.

The Eucharist connects us to the infectious memory of Jesus Christ. When we really relate to Christ, we become committed to His project for the world: justice, reconciliation and love. Life and worship become two sides of the same coin.

Maybe Mass is not so boring after all.

Columban Fr Frank Hoare was ordained in 1973 and has been a missionary in Fiji, Australia and the United States.