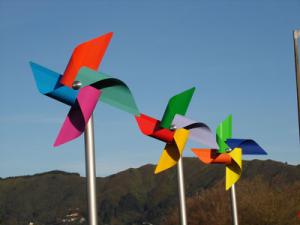 Something has been added to our local park at Avalon here in the Hutt Valley. It caught not only my eye but my imagination and my heart as well. It is a sculpture by Leon van den Eijkel that he calls “The Smiling Windmills”. He describes it as is a celebration of childhood, of a time when nature played with us. As I walked away from my first sight of it I found I was smiling. I also found myself pondering the importance of play in life.

Our world is one that is marked by gravity. We confront serious issues on almost every side. People are working longer and longer hours. It seems to be a world in which there is little time or place for play, even for children let alone responsible adults. Taking time to play can seem inappropriate in the face of what is going on in the world.

I remember a variation on the parable of the talents I read at one time. In this version one person was given the gift of the flocks, the second the gift of the forest and the third the gift of music and dance. That place came on very hard times while the ruler was away and he returned to find total devastation. The flocks had been slaughtered to feed the starving people and the forests cut down to keep them warm during the long winters but worse than the loss of these was that the spirit of the people was broken. The owner understood and sympathised with what had been done to the flocks and the forest by those entrusted with them but he asked the one entrusted with the gift of music and dance why he had not used his gift to keep the spirit of the people alive. He replied that it did not seem appropriate amid such hardship to be singing and dancing. So he did not use his gift and the spirit of the people, that might have sustained them through the physical hardships, also died.

The story is a reminder of the need at times to do what seems to be counter-indicated – to exercise when one feels depressed and totally lacking the energy to do anything, to play with important ideas and other stuff that we are expected to take with great seriousness, to seek out the company of others when we feel like being alone, to find cause for laughter and humour in situations which seem to exclude them. It is often noted how the poor people of the world have an extraordinary capacity for humour and celebration though on the surface they have little reason for either.

I have always loved the notion that for the Celts “religion was too important to be taken solemnly”. One interesting expression of this approach is to be found in the Book of Kells, where it seems that a number of the illustrations that accompany the biblical texts resemble cartoons more than anything else. It suggests that a playful approach while it may lack solemnity can nevertheless be a serious way to explore the sacred and sacred texts. The bible too says something similar when it speaks of wisdom as “ever at play in the universe, delighting to be with human beings”.

Children too remind us if we let them as one parent reflects “When I feel the wind on my face, I brace myself against it. I feel it messing up my hair and pulling me back when I walk. My kids close their eyes, spread their arms and fly with it, until they fall to the ground laughing”. They know that nature plays with us.

Hopefully there are things in your local environment like the “Smiling Windmills” that can remind you to mix in some levity with all the gravity, a little play with all the work and some rest in the busyness of our lives. For this too we have the Sabbath Day.