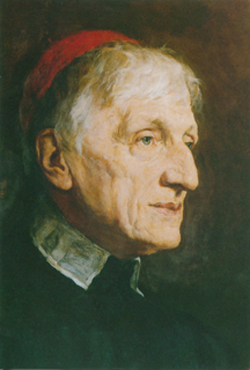 At the funeral, in 1890, of Cardinal John Henry Newman who is to be declared 'Blessed' on September 19th by Pope Benedict XV1, a wreath of flowers was sent by a woman with a card that read: 'A tribute of respect to a great Englishman, whose beauty of life shed its light and purity on his own century, but belongs to all ages.' Her insightful and prophetic words resonated down the years as Newman's spiritual influence continued to spread, even to our own time. His beatification confirms what many have felt – here is a genuinely holy man.

Something of that holiness seems to emanate from the portraits – the lean ascetic face, the quiet dignity, that quality of otherworldliness that so impressed his contemporaries. As one who heard him preach said, "No one has ever made us feel as he has done the detachment of the pilgrim from all earth's closest ties." Not that he was indifferent to the affairs of the world; on the contrary he kept abreast of what was going on and, in many ways was far ahead of his time.

His search for truth cost him dearly, cost him friends and companions and a loved way of life. But with that honesty and humility so characteristic of him, he steadfastly walked the narrow road. "God," he wrote, "has created me to do Him some definite service, He has committed some work to me which He has not committed to another. I have my mission: I may never know it in this life, but I shall be told it in the next."

A great thinker, a writer and a man of prayer, Newman had the gift of being able to engage with his academic colleagues, 'nor lose the common touch.' Apologia Pro Vita Sua, one of the most profound biographies ever written, has both awed and guided the hearts of many. His sermons, his reflections on Scripture, his prayers still have power to move us today. And who has not been stirred by his poetry, not least the haunting verses of "Lead, kindly Light". Catholics and non-Catholics feel spiritually indebted to Newman; he attracts people of many faiths and cultures. For his motto, when, late in his life he was made a Cardinal, Newman chose the words: 'Cor ad cor loquitor', 'Heart speaks to heart.' At the end of his life this was what mattered, not his genius, not the brilliance of his work, not his great preaching or his marvellous writings, but that his heart would be in the right place. He knew, as St John of the Cross so pithily said, "In the evening of your life, you will be examined on love." As we rejoice in the beatification of this great Englishman, let us pray that our hearts too will be true and loving as we walk in the 'kindly Light' that guides us every day of our lives.