Reflection - With Mary in Advent 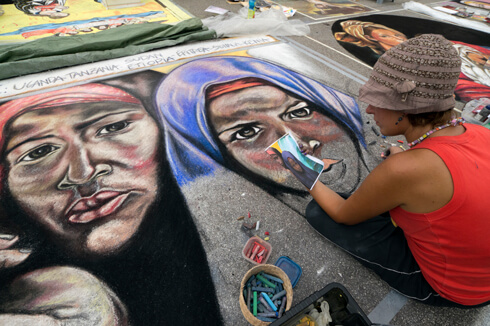 Mary is the epitome of the lowly, the marginalised, for whom “there is no room at the inn”.

What do we know of the woman we call Mother of God and Mother of the Church? She was probably born in Nazareth, a Galilean town of about 1,600 people, in the reign of Herod the Great. She spoke Aramaic with a Galilean accent, but she would also have heard Latin spoken among the Romans, Greek used in commerce and by the elected officials, and Hebrew when the Torah was proclaimed in the synagogue.

She belonged to the peasant class along with 90% of the population. They had to pay three-fold taxes to Rome, to Herod the Great, and to the Temple officials who took 10% of the harvest.

The Holy Family probably lived in an extended family unit, where three or four houses of one or two rooms each were built around an open courtyard. There the extended family shared a cistern and a millstone for grinding grain. Domestic animals also lived there. Mary most likely spent about 10 hours a day in domestic chores like drawing water, gathering wood, cooking meals and washing utensils and clothes.

In Palestine of the time, women married at about 13 years of age, and so the birth of Jesus occurred when she was very young. We shouldn’t think of her as fragile. As a peasant woman capable of walking the hill country of Judea while pregnant, of giving birth in a stable, of making a four or five-day visit to Jerusalem on foot once a year, and of engaging in hard labour at home, she probably had a robust physique in youth and in later years. Like Jewish and Palestinian women today, she probably had dark hair, dark eyes and dark complexion.

Why do we focus on this in Advent?

First, because Mary’s history brings her closer to us. She was nothing like the Madonnas depicted in such splendour by the medieval artists. Though her culture was quite different from ours, it was not unlike that of today’s village women of Asia, Africa and Latin America. With Joseph she struggled to pay the taxes by which the rich became ever richer at the expense of the poor. Like the majority of poor people most of her life went unrecorded.

Second, her holiness lies in persistent, faithful listening to God’s word. Today we recognise more and more that holiness, even the holiness of the saints, consists in persevering fidelity in the midst of everyday life. As events unfolded round her, often to her surprise, Mary had to figure out constantly what God was asking of her.

Third, today we recognise Mary’s Magnificat as a rousing freedom song of the poor. Mary is the epitome of the lowly, the marginalised, for whom “there is no room at the inn”. God is her only hope, and so she sings the Divine praises with great confidence. She was convinced that in God’s Kingdom the poor are first to eat at the table of the Lord. She is simply God’s handmaid. Christians throughout the world will join with Mary in singing her vibrant song this Advent. May it be both an expression of praise of God’s power, and a prophecy of the type of world we are helping to build.

Listen to Reflection - With Mary in Advent