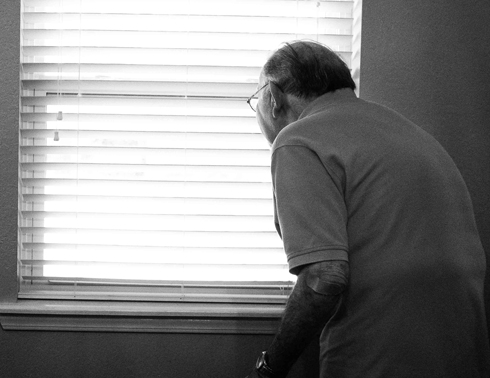 During the months leading up to his eighty-seventh birthday, on several occasions, Fr. Paul White had gone from the hospital to a rehabilitation centre and then returned to the Columban house a few weeks later. This time, however, as he prepared to leave the hospital, the doctors were uncertain as to what the future held for him since he was too weak to undergo physical therapy at a rehabilitation centre. He was discharged, therefore, to a long-term care facility where physical therapy was available a few times each week, but greater attention was given to caring for his other needs.

The care facility, though bright and clean, was an old building. Fr. Paul’s bedroom, which he shared with another resident, was rather small, with little space for his personal belongings. Since he was fussy about his food, he seldom found the meals there satisfying.

After he had spent a few weeks there, it was clear to everyone around him that his overall condition remained poor and that he would be in need of nursing care for the remainder of his life. On the other hand, Fr. Paul, always an optimist, was eagerly telling staff and visitors alike that he was making good progress and felt well enough to return to the Columban house.

Therefore, after supper one evening I decided that to visit him at the care facility in order to clarify his situation. As I drove along my heart was heavy, since Fr. Paul had contributed in many ways to our community, and had enlivened it with his storytelling and playfulness. I was concerned, therefore, that he would feel rejected to learn that his Columban colleagues could no longer support him in our community. I was also anxious that he would be disappointed to hear that the care facility would become his new home.

My visit began with the usual inquiries about the events of that day. Then, after a brief pause, I informed Fr. Paul that I wanted to talk to him about a serious matter, and proceeded to tell him about the concerns of the medical staff, the risks associated with his limited mobility, and the inability of the Columban community to provide for his long-term needs. I finished by telling him that I had made the decision that he was to remain in that care facility, but that the Columban community would continue to visit him on a regular basis. Then I paused and prepared myself for an outburst of sadness and anger.

After a moment of silence Fr. Paul looked around his small room and responded, “I’m fortunate to have everything that I need here. Think about all those refugees who have to leave their homes and don’t know where they are going. They carry only the clothes on their backs and are unsure about their next meal. Here I have a comfortable bed, three meals each day, and people who respect me. What more can I ask for? I’ve had a good life and am content to stay here.”

I was astonished! Instead of Fr. Paul reacting with frustration because he could not get what he had hoped for, he expressed appreciation for the blessings he was already enjoying. Instead of blaming others, he graciously accepted the limitations of his situation.

Later that evening I shared with Fr. Paul about the concern and anxiety that I had felt before visiting him. He listened attentively to me with a sad facial expression. However, I soon discovered that he wasn’t feeling sorry for himself, but rather that he was pained to realize that in an indirect way he had caused me distress. Whereas I had expected that our evening would finish with me trying to comfort Fr. Paul for having crushed his dream of returning home to live with the Columban community, instead it finished with him reassuring me that I had made the right decision about his care and well-being.

Having spent the final six months of his life in that care facility, Fr. Paul entered his heavenly home last October. However, now as I ponder the meaning of Lent, I find myself cherishing the memory of that evening with him. As I do so, I desire to fast from blaming others for my limitations and instead strive to accept my human frailty. I also want to abstain from complaining, and instead focus on my blessings. Finally, I am trying to refrain from self-pity, and instead show greater compassion for those who are less fortunate than me. Thanks to Fr. Paul’s example, I now have a deeper understanding of my conversion journey during this Lenten season.