Reflection - The space between them 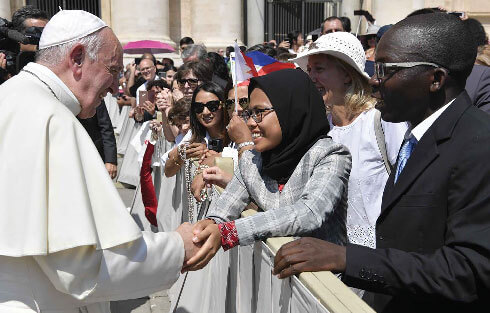 In the 80s I saw a movie called 'The Accidental Tourist'. It was about a rather eccentric and isolated man named Macon who writes travel books. What I recall about his books was that far from being guides to help his readers meet people and experience different places, customs, traditions and food, the purpose of his books was to help them avoid anything that was unfamiliar. Travel also brings with it the possibility of change as different ways of seeing and responding to the world are encountered and absorbed. However, the approach advocated in his books was about zero impact or change.

When we did a series of talks here in New Zealand to mark the special month of Mission in October 2019 I found myself thinking that our Church resembled 'The Accidental Tourist' at some points in its history. The Council of Trent (1545) where anxious bishops faced with the twin threats of the Enlightenment Movement and the Protestant Reformation took a defensive stance towards the world, provided a sort of 'travel book' for the Church. Although it was established in almost every part of the world, very little from the local environment, its language, traditions or customs was brought in. The great boast was that the Church, and certainly its liturgy, was the same wherever you went in the world. It would seem that the Church came only to teach and not to learn.

When Matteo Ricci (an Italian Jesuit priest and one of the founding figures of the Jesuit China missions) arrived in China in 1583 he did not follow this approach. He sought to absorb as much of Chinese language, customs and traditions as he could so that there might be an open and honest encounter between Christian faith and Chinese culture. Sadly Rome did not approve of the stance taken by Ricci and condemned as ancestor 'worship' the Chinese practice that Ricci understood to be simply a veneration of ancestors.

To this day Christian faith in China struggles to be seen as other than a foreign import. How different the story of mission might have been if Ricci’s approach had been supported. The practice of condemning things considered anathema, a feature of the documents of Trent, continued to keep the Church in its defensive posture.

With this in mind I was taken by the poster promoting Mission Month here in New Zealand. It shows an encounter between Pope Francis and a Muslim woman. In the space between them there is warmth, openness and joy. Here, as elsewhere in his papacy, Pope Francis embodies the open stance towards the world taken by the bishops at Vatican II. Believing that the Church is missionary by its very nature they sought to engage the world to which they were sent. A feature of the documents of Vatican II is that there are no lists of what is considered anathema included. The changes made by Vatican II were the result of listening to different experiences from around the world and absorbing what was heard. Rather than its old defensive stance the Church sought common ground. This shift is recognised in the document on the Church in the Modern World which begins with the words “the joys and hopes, the griefs and anxieties of the people of our time, especially those who are poor or afflicted in any way, are the joys and hopes, the griefs and anxieties of the followers of Christ as well”.

The process started then is an ongoing one as was evident from the recent Synod on the Amazon. Fortunately, these days the Church looks less like an accidental tourist and more like a dialogue partner willing to engage and learn from the world while continuing to offer it the treasure we have found in Christ Jesus.
By the way, if you have not seen the movie, Macon’s life was changed – the result of an encounter with a woman.

Listen to "Reflection - The space between them"