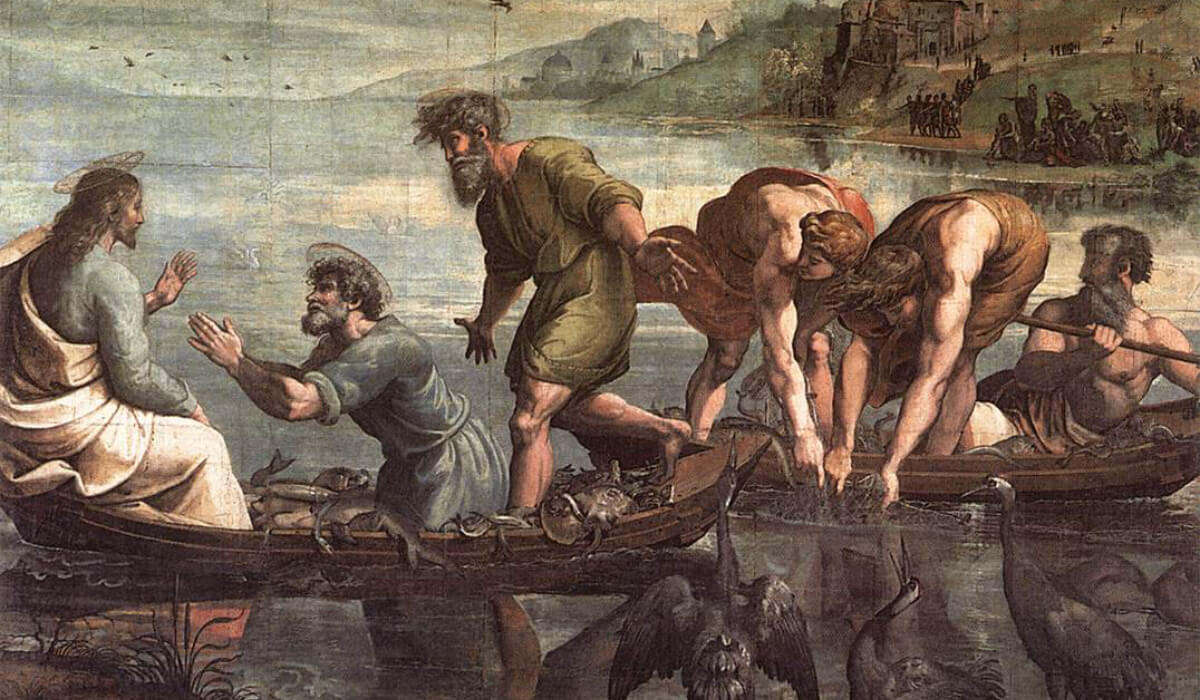 The Miraculous Draught of Fishes, by Raphael, 1515. Photo: Wikimedia Commons

This week the dramatic exchange between Jesus and Peter results in a total affirmation of Jesus by Peter. While the other disciples are involved, some by name, like Thomas last week, Peter is the stand out apostle for interacting with Jesus.

A man with obvious weaknesses of the human condition, Peter is chosen as the leader of the apostles and acknowledged by the others as the leader. In today’s gospel Peter and the others have gone fishing for the lack of anything else to do. Jesus appears on the shore and instructs them to lower the net and the boat is nearly swamped with the catch of fish.

John remembers an earlier time before they became disciples and puts the two instances together and recognises this latest action as belonging to Jesus. He says, ït is the Lord”, Peter jumps overboard and heads for shore. Impetuous but full of action, wanting to do something rather than nothing, And not wait.

After the meal of bread and fish that Jesus prepares for those present, there is another interaction between Jesus and Peter.

Was it in privacy or were the disciples gathered around when Jesus asked Peter if Peter loved him?

John wrote his gospel many years after these events happened. Was the sense of betrayal still a raw memory for Peter or did the resurrection erase that pain? Was it a healing of memories? I remember a priest giving me a synopsis of his homily on this important part of the post-resurrection appearances of Jesus.

He said in the Greek language there are different words for the word ‘love’. Peter’s first reply that he loves Jesus and his second reply are ‘nice’ but lacking something. The third time Peter is challenged, his response was that he loved Jesus completely, heart and soul. This is what Jesus was seeking and asking for repeatedly. He finally received the strongest affirmation from Peter foretells Peter’s death for Jesus; a death that would give glory to God through his death as Jesus gave glory to the Father.

We see the dynamic and power in the apostles in the first reading of Scripture. The gospel may be post-resurrection but the first reading is post- Pentecost. The apostles are changed men, they are men of conviction. They are not afraid of the High Priest and the Sanhedrin. They oppose these powerful men boldly and Luke adds that they are proud to suffer humiliation for the sake of Jesus name.

They are highly motivated, these men from Galilee. This makes them powerful men. No doubt the Sanhedrin thought that with the leader dead, the followers would disperse. Unfortunately, it was not the case. No doubt Pilate was informed that the Jews were still squabbling over this man Jesus who was crucified and now is said to be alive. No doubt he sighed.