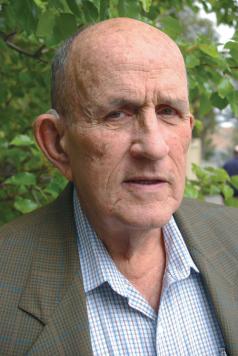 Columban Fr Peter Doyle was farewelled from St Francis Xavier Church in West Mackay, Queensland by Bishop Emeritus,
Rev Brian Heenan and a large contingent of priests and people who filled the Church on April 2, 2014.


The homilist for the Requiem Mass was Fr Gary Walker, the Regional Director of the Columban Fathers in Australia and New Zealand.

Since Fr Peter stipulated that he did not want flowers or a eulogy at his funeral service, Columban Fr Walker used readings to reflect the kind of priest that Fr Peter was. He was a Good News priest, like Jesus the High priest, he was compassionate and generous to the people whom he served and finally he was 'a man of God'; a man and priest with a well developed sense of humour who was nevertheless serious about the 'things of God'.

Columbans in Lima, Peru remember him with cash stuffed into his shirt pocket and clearly visible to anyone on 'the make'. He was one of the easiest 'touches' in town and people came from far and wide to try their luck with Peter. He would give the shirt off his back to those in need and that of any Columban who left a shirt hanging from a chair in the priest's house.

He was deeply appreciated by the parishioners because of his capacity to listen and empathise. His sense of humour was a great asset in his work and in the final analysis, he was a very humble man. He knew his limitations and still did whatever was requested of him.

Peter John Doyle was a local from Marian, just outside Mackay, where his father was a cane farmer. After primary school with the Sisters of Mercy at Marian, and secondary school with the Christian Brothers at Yeppoon, Peter completed his teacher training in Brisbane and taught in Queensland State Schools for three years during 1959-1961.

He entered Pius X seminary in Brisbane in 1962 and was ordained a priest for the Rockhampton diocese in 1968 by Bishop Francis Rush at St Patrick's Church, Mackay. His first appointment was as assistant priest in Bundaberg, 1969-1973, where he became friends with the Kinne family, (their son, Warren is now a Columban missionary priest in Shanghai, China).

Bishop Francis Rush had a scheme of sending priests from the Diocese of Rockhampton to New Guinea. Peter spent three years at the Catholic Mission, Burlei in Wewak Diocese. On his return, he was appointed to St Joseph's parish in North Mackay,  but after three years he asked for permission to become a Priest Associate with the Columban Fathers and was assigned to Lima, Peru. Six years later, Peter applied to become a permanent member of the Missionary Society of St Columban in 1987 and remained in parishes in Lima until 1998 when he returned to Australia.

Ill health became an issue for Peter and in 2008 he retired to St Francis of Assisi Nursing Home in Mackay under the splendid care of the Franciscan Sisters. The nursing home became his 'parish' and each morning after Mass he would do the rounds greeting the people, staff and carers.

He celebrated his last Mass with some assistance on St Patrick's Day, March 17, and insisted on saying a few words in honour of St Patrick.

He died quietly on Friday afternoon March 21, 2014 in contrast to his sometimes boisterous life. He was buried in the family plot at Walkerston outside of Mackay.

Fr Gary Walker SSC is the Regional Director of the Columban Fathers in Australia and New Zealand.