Reflection – The power of the Easter Season

The parable of the loving father and his two sons revisited

The Easter Season reminds us that from death, comes life. An encounter with the Risen Christ can bring peace, forgiveness and reconciliation out of situations of animosity, division and the inability to forgive. Columban Fr Barry Cairns shares an Easter story of his parish pastoral council reaching out to forgive.

Fifty years ago I was pastor of an “old Christian” community on Amakusa Island in the far south of Japan. By “old Christian” I mean that a Jesuit missionary, Fr Luis Almeida, founded the parish 451 years ago in 1566. Then the Tokugawa daimyo government expelled or executed all missionaries. The Amakusa community went into hiding remaining faithful for 240 years. This persecution officially ended in 1873 by Imperial decree. However, the attitude of persecuting Christians was deeply embedded. The parish on Amakusa Island was a small village, one third being Christian. Nearly all were very poor fishermen.

When World War II came those slumbering antagonisms against Christians resurfaced. During the war the Catholic community suffered blatant discrimination and mischievous slander even in the school classroom. Christians were regarded as doubtfully loyal towards the Emperor who was regarded as a living god.

One day, 20 years after the end of World War II, a woman (I will call her Mrs Tanaka) came to the rectory door and said to me: “My husband is dying. He has cancer. He would like to see you.” So I went with her to a small house where the sick Mr Tanaka was lying on the tatami mats. We talked together for a long time. It emerged that Mr Tanaka was a baptized Catholic from an “old Christian” family. However he had not been near the Church for over 40 years.

“Is it possible for me to return?” he asked me. I replied: “Most certainly! Jesus gives people like you a very special warm welcome back.” And so he received the Sacrament of Reconciliation. I told him I would be back on Sunday afternoon with Anointing of the Sick and Holy Communion. I left that house with a man at peace. 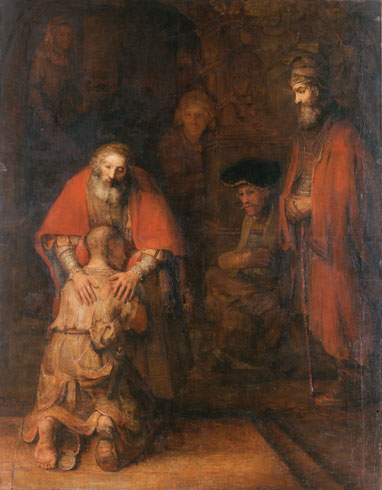 On Saturday evening there was a meeting of the parish council. I told them about my recent visit to Mr Tanaka and his return to the Church. Wow! There was a united human volcanic eruption with red hot lava flowing! “You cannot take him back. He is an apostate. Only a few years ago during the war he co-operated with the thought-police and persecuted us.” Old wounds thought healed came to the suppurating surface.

This is where providence stepped in. The Lenten Gospel for the Sunday was the parable of the loving father with two sons (aka the parable of the Prodigal Son). Without mentioning Mr Tanaka by name I did speak about the elder unforgiving son who wanted punishment rather than forgiveness for his younger prodigal brother. God our Father’s mercy and compassion is for everyone. This elder brother was bathed in the father’s love but took it for granted.

His younger brother made a terrible mistake. In suffering he later realised the depth of his father’s love. He returned to him and received a warm, unconditional welcome back. He was hugged.

At the end of Mass I announced that there would be a house prayer gathering at Mr Tanaka’s home this afternoon at 3:00pm. I left it at that.

It was with anxiety I approached Mr Tanaka’s house that Sunday afternoon. I left my shoes at the door, opened the sliding door and entered a packed room. There in the front row talking to the sick man was my entire parish council.

I choked up with emotion and just said to them: “I am proud of you”.

Fr Barry Cairns SSC has been a missionary in Japan since 1956.