To visit the imprisoned 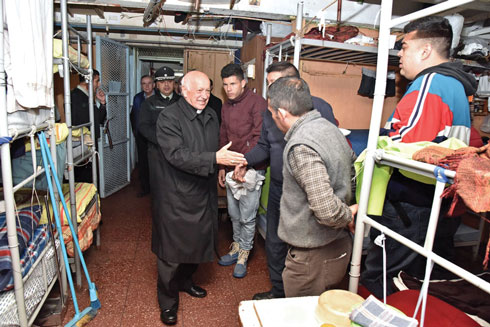 The Archdiocese of Santiago is divided into seven territorial vicariates. The most recent vicariate to be established in the Archdiocese of Santiago is the Vicariate of Maipo where I am privileged to be the Episcopal Vicar. Our Vicariate is located on the southern outskirts of the sprawling city of Santiago and includes two very different municipalities: Puente Alto (the most populated municipality in the country) and San José del Maipo (a rural municipality nestling in a canyon of the Andes Mountains). Our Archbishop, Cardinal Ricardo Ezzati invited each Vicariate of the Archdiocese to emphasize one of the corporal works of mercy and to implement that particular work of mercy in a special way. The priests, sisters, deacons and lay pastoral agents of the Vicariate of Maipo decided that we were called to live out the corporal work of mercy: To visit the imprisoned.

We based our decision on the fact that Puente Alto has a prison with 1300 male inmates. It was built to house 700 inmates. The inmates are condemned to live in overcrowded conditions in large dormitories with bunk beds. Each bunk bed has mattresses for three men. The man on the top can touch the ceiling with his nose! The food rations provided by the prison authorities leave a lot to be desired and so the inmates rely on their families to bring them food which they cook and share among themselves. Many of the inmates come from the Columban parishes of San Matías and Santo Tomás.

When I returned to the Maipo Vicariate after four years as the Episcopal Vicar of the Southern Zone, I brought with me a frightening memory. On December 8, 2010, the feast of the Immaculate Conception, there was a fire in the San Miguel prison. 81 inmates were burnt to death. It was caused by a fight among the inmates. Some of the prisoners had built a flame thrower using the gas canisters of their little kitchen. The flames ignited mattresses. The fire was so intense that the gates of the prison cell could not be opened. I went to the prison and spent the day consoling families who had lost their sons, husbands or brothers to the fire. I went with Cardinal Francisco Javier Errazuriz to the area of the prison where the charred bodies of the dead prisoners were being kept. Cardinal Errazuriz prayed for the dead and blessed the bodies of the victims of the fire. After that experience, I could not ignore any longer the plight of the men and women who are deprived of their liberty for the crimes which they committed. As Pope Francis teaches us, no matter what sins we may commit we are never excluded from the love or the mercy of God. 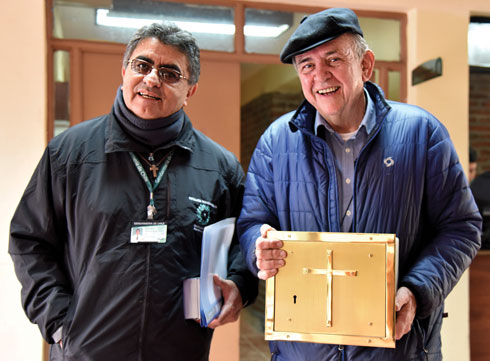 Not long after returning, I visited the prison in Puente Alto. I discovered that a small group of Catholics were visiting the prison every Wednesday. I met with them and we began to explore ways of increasing the number of pastoral agents for this apostolate. Then the merciful Lord sent us a great blessing. A new chaplain was appointed to the prison, Padre Armando Vergara. Padre Armando is a native of Iquique in northern Chile and in his youth he participated actively in the Columban parish of Espíritu Santo.

Together with Fr Vergara, the Vicariate of Maipo organized workshops and courses on Prison Apostolate increasing the number of lay pastoral visitors from 7 to 30. The increase in volunteers has meant that four days a week Catholic prisoners can avail of spiritual accompaniment and prayer. When Fr Vergara arrived in Puente Alto, the small Catholic chapel was in a deplorable condition. The Maipo Vicariate made a commitment to raise funds to repair and renovate the prison chapel. So far we have raised more than $600.000 pesos (a little less than US$1000) for the renovation. On August 12, 2016 Cardinal Ricardo Ezzati, visited the prison and celebrated the Eucharist for the prisoners.

During the same month of August, we organized a campaign in our parishes to donate toiletries for personal use: toothpaste, toothbrushes, soap, toilet paper, shampoo etc. In all our parishes there was a generous response. In September, a religious sister of St Ann, Sr Maria Luz Treupil came to our Vicariate to work in prison ministry. She had spent many years in this ministry in the prison of the northern city of Antofagasta. While she was there, she began a choir and taught some of the younger inmates to play the guitar. Eventually, they produced a CD. For the first time ever in the pastoral life of our Vicariate, the Summer School for the Laity will offer two courses in the prison for the men.

As the Jubilee Year of Mercy came to an end, Pope Francis wrote a Pastoral Letter, “Misericordia et Miseria”. There is no doubt that prisons are necessary in society but we also need to remember: “No law or precept can prevent God from once more embracing the son (daughter) who returns to him, admitting that he/ she has done wrong but intending to start his (her) life anew.” (“Misericordia et Miseria” no.11)

Fr Michael J. Hoban SSC has worked in Chile for more than 40 years.