Prayer-on-air with prisoners and shut-ins

An unsung two hours of prayer-on-air with the many English-speaking people locked away in the prisons of Hong Kong that has been going on every Sunday night for almost 12 years has proven an important lifeline for its ever-keen and expanding listening audience.

The host of The Hour of Love, Bruce Aitken, has hunkered down behind the microphone over 600 times in his studio at AM 1044 Metro Plus to provide two hours of spirituality, news and religious music from 9.00pm on Sunday nights specifically for those who are unable to leave home or come near a church on Sundays.

As the flood of correspondence reflects, an outside voice of prayer coming into prison cells and the ears of migrant workers who are unable to leave their employer’s homes, has brought a wash of company and healing to many a scarred soul and encouragement to many a lonely heart. 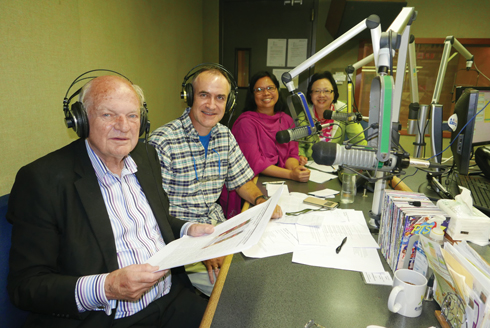 Aitken, who broadcasts under the name of Brother Bruce, says his message is simple. A bit of scripture opens the evening, with the readings from the Mass of each Sunday, followed by some music and, on a good night, a guest or two.

The programme regularly features live interviews with prison chaplains, Oblate Father John Wotherspoon and Columban Fr Pat Colgan who adds the dimension of a little bit of Spanish for the many in jail for whom it is a native tongue.

Filipino migrant workers also have their spot, with their chaplain, Father Jay Flandez, having a word, and a few direct telephone calls from Manila about life at home are added to round out the evening.

But the big attraction of the two-hours on air is the invitation to pray with other listeners, as Aitken reads out prayer requests for loved ones both far away and nearby, and, in his own unique way, uses the airwaves to bring a spiritual comfort to many an aching heart, flagging spirit and lost soul.

He believes strongly in the power of prayer, and the prayer does not stop in the studio, but is backed up by a praying community that gathers every Sunday at St. Jude’s church in Kam Tin, something Aitken says is an essential element that gives the prayer-on-air a concrete community base, and a communion of hearts and souls.

Although he never set out to create a record but just offer a bit of solace, hosting over 600 weekly programmes on the trot could surely be worthy of some mention in the Guinness Book of Records.

Aitken’s red-hot passion is for those behind bars, whose real crime he says is often not much more than naïveté and the unforgivable sin of being born into poverty. Although his record is not quite perfect, as he did miss one week recently when visiting his native United States of America. Columbans Fr Jim Mulroney, Pat Colgan, Columban Lay Missionary Beth Sabado and local volunteer Sr Romily stepped in to host the program.

The Hour of Love is a long-running outreach that its vast listening audience attests is a worthwhile and much appreciated ministry in the diocese of Hong Kong.

But although Metro Radio is a community broadcaster, the programme does not go to air without the financial support of people who believe that forgiveness, reconciliation and offering mercy to those who are suffering is a holy and wholesome thought.

Aitken says that he has plans to add a half-an-hour to the programme to give more time to his segment, Prison Visitation on the Air, which he describes as having taken on a life of its own. However, finance is holding him back.

So if you reckon a bit of spiritual healing is worth your support, a quick email to houroflove@gmail.com can tell you how to do it.

And may God guide you gently through the week.

Fr Jim Mulroney SSC is a Columban Priest and the Editor of 'The Sunday Examiner' which is the English language paper of the Hong Kong diocese.