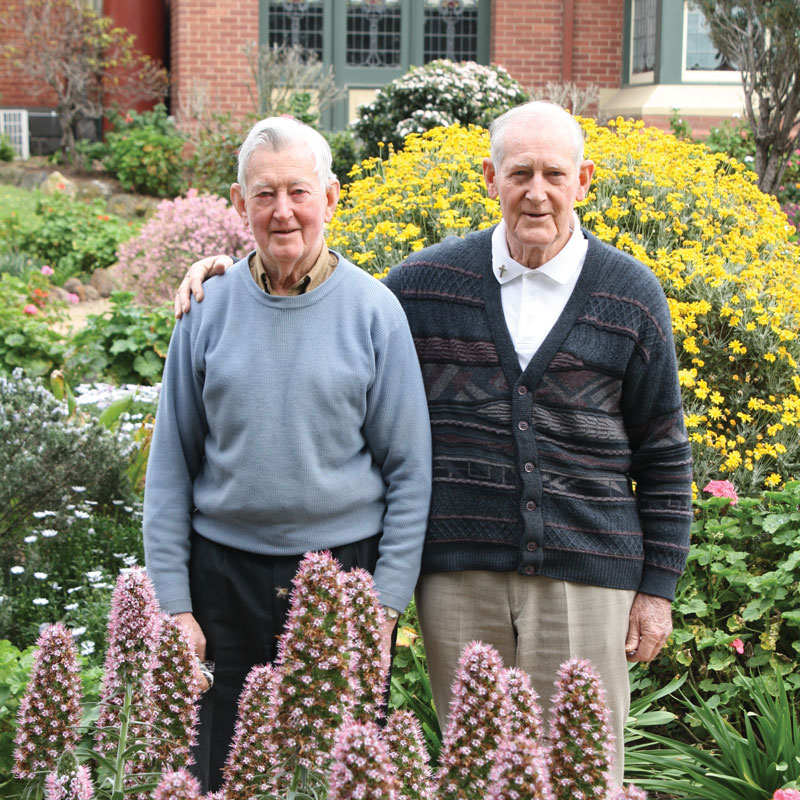 In his 96th year, Fr Leo Baker died of cancer on March 27, 2019 at Mercy Health Care in Colac, Victoria. Two of Leo’s brothers, Chris and Pat, also Columban missionary priests were with him when he died.

Fr. Leo was born in Camperdown, Victoria, on January 6, 1923, the eldest of four boys and three girls.

At five years of age Leo began his schooling in Camperdown riding a horse five miles each way to the Catholic school. The horse was reluctant to move on the way to school but happily galloped home each day at a great rate.

The family later moved to Cobden where Leo continued his schooling until 14 years of age when he left to bolster the family income and worked for two years on local farming properties and took on some on some very heavy work like milking cows by hand, chopping tons of wood, working in a hardware store and doing a lot of heavy lifting as a builder’s labourer. He also spent a lot of time catching rabbits and selling them.

At 16 years of age the missions began to call and Leo contacted the Columban Fathers in Essendon who encouraged him to go back to school and complete his education. He spent the next two and a half years, boarding at St. Patrick’s CBC, Ballarat.

From there he moved on to Spiritual year and Philosophy at St. Columban’s, Essendon followed by the diocesan seminary at Werribee where he studied Theology.

He was ordained by Archbishop Daniel Mannix at St. Patrick’s Cathedral, Melbourne, on July 25, 1948.

After six months in a parish in Melbourne, Leo received an appointment to Korea, arriving there in April, 1950, to begin language studies. But two months later the Korean War began and Leo was moved south. In August he was assigned to Japan where he began Japanese language study before being appointed to Kamogawa, Ryujin, Tetori, and Arao parishes.

Fr Leo combined the parish apostolates with writing histories of Columban parishes in Japan and photographing Columbans and their work. These photographs were often used by The Far East magazines.

After several years as pastor in Choshi parish, a four-year appointment to Australia followed in 1976 where he served as Bursar in the Essendon house and in other capacities.

Back in Japan in 1979, Leo became Regional Correspondent and Communications Officer at the Tokyo Procure and took on further research into Columban mission history in Japan and the publishing of the Japan Regional Newsletter. This was followed by directing the Good Shepherd Movement (an English language teaching project) and appealing for support for it in parishes around Tokyo and Yokohama.

Leo’s final appointment in 1986 was back to the ANZ Region where he engaged in mission education and parish appeals in a number of dioceses. He completed the Pacific Mission Institute course in Turramurra NSW and became chaplain to Nazareth House Aged Care in North Turramurra, NSW.

After retiring to Essendon in 1998, and despite failing eyesight, Leo continued his interests in photography, card-making, gardening and participation in ROTA (Religious of the Third Age).  In May of 2014 Leo moved to Mercy Health Care in Colac, Victoria, to be closer to his family and friends there and celebrated his 70th Anniversary of ordination there in July, 2018.

Following his Requiem Mass at St. Columban’s Essendon, Leo was laid to rest alongside many of his friends in the Columban plot at the Melbourne General Cemetery in Carlton.