Reflection - The road to prayer 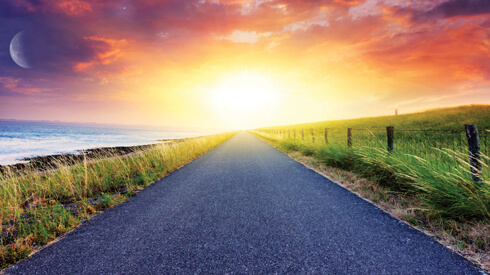 What impresses me most in my journey of prayer is how I have been guided by God through the goodness of other people. When I worked in Chile many years ago, I realized that I was travelling in a parallel line with the Lord and not having much personal sharing with Him. Then, without warning, I was asked by my Superior to go for studies in spirituality and spiritual direction. I was shocked. I could not believe that I was being chosen to do this, because I never considered myself either worthy or capable of such a calling. However, when I expressed my surprise and resistance, I got another shock. I was told that my community leaders had been watching me for a long time and they could see my suitability for such studies!

After I got over these shocks, I decided to apply for admission to a school of theology. To do this, I needed a recommendation, and so I approached a former professor of mine who happened to be working with me in the same parish. He had been helpful to me in my struggles with studies in the seminary and I felt he would have a good knowledge of my ability to face the challenges to come. He gave me a letter stating that he always considered me to be a person of above-average intelligence and that he had no doubt about my ability to do well in studies. I jokingly told him that he should not tell lies! However, he proved to be correct and later on, when I started studying a year’s spirituality program in Berkeley, California, I found that, not only could I pass my exams, but I could even excel in some of the courses.

While at Berkeley, I met a religious sister who was on sabbatical. She had come from Cambridge, Massachusetts, where she was working as a staff member in an institute for the training of spiritual directors called The Center for Religious Development (CRD). She encouraged me to apply for a place, and, after being interviewed by the staff, I was accepted, and spent three years studying and working there. It was through all those studies and the practice of spiritual direction that I could deepen my journey in prayer as a conscious relationship. This deepening had several stages. Firstly, I came to experience the great love and mercy of God for me a sinner. Then, I came to know Jesus as my faithful companion, friend, and teacher. This led me on to discovering, through my relationship with Him, the true meaning of friendship, of ministry, of commitment, of compassion, of suffering, and even of death. I came to understand and appreciate each of these areas of experience as opportunities for greater love and life, and, as I prayed about them, I found myself being healed of several painful memories that I had been carrying for many years, such as punishment, deprivation, exploitation and abuse.

All of this involved learning to be myself with God, and letting Him be Himself with me. For a long time I had been hesitant to let God into some areas of my life, and therefore could not be truly open with Him. Also, I wanted God to be as I desired Him to be, not as He might choose to be in Himself, and, as a result, I often got frustrated and angry with Him. This controlling attitude of mine placed what seemed like a thick glass wall between God and myself. I could look at Him, but I could not get to Him. How could I remove this wall?

The breakthrough came during a retreat when I told my director about my struggle in prayer. He listened to my complaints, and then simply said, “You know, in His great love for you, God leaves you free to be as you are. Could you not, in your great love for God, let Him be free to be as He is?”

To hear the word “free” made all the difference for me, and, in the resulting atmosphere of mutual freedom, I found that the glass wall was gone and there was a new closeness between God and myself.

When I had completed my studies in the USA, I was assigned to Pakistan. There I became involved in the ministry of retreat-giving and spiritual direction. I also worked in a rural parish where there was lots of work to be done visiting and meeting many people who had all kinds of struggles with poverty, injustice and oppression. I was accompanied by another priest who was actively involved in justice and peace work, and I got involved too. This had a marked impact on my experience in prayer. Previously, I used to like spending time alone with God trying to get closer to Him, but now it was not working. There were too many “distractions!” Then, one day, as I was praying in my room and complaining in frustration, I heard some children playing loudly outside my window. I grumbled to God about the noise, and suddenly an answer came in my mind: “You are looking for me inside, and I am outside!” From that day onwards, I found balance in my prayer and could experience God’s presence both alone and with the people.

Now, it is from Pakistan that I am writing this article. These days I am being guided by God in my journey of prayer by a little book that I have found most enriching. It is called The Sacrament of the Present Moment by a French Jesuit named Jean Pierre de Caussade. In it, he says things like, “Ah! You are searching for God…You seek perfection, and it lies in everything that happens to you - your suffering, your actions, your impulses are the mysteries under which God reveals Himself to you” (p.18). And, “Everything that happens each moment bears the stamp of God’s will… No moment is trivial since each contains a divine kingdom and heavenly sustenance” (p.79).

Let me conclude my writing with a recommendation of this book to all you who, like me, are making your journey of conscious relationship with God. I hope that it will help you as much as it is helping me.

Columban Fr Joseph Joyce has spent most of his missionary life in Pakistan.

Listen to "Reflection - The road to prayer"