“I want the Church in the street” Pope Francis

The Church “needs to listen unceasingly to what she must believe, to her reasons for hoping, to the new commandment of love,” Pope Francis writes in an introduction released by the Vatican Congregation for the Evangelisation of Peoples and the Pontifical Mission Societies to the Extraordinary Month of Mission that the universal Church is celebrating in October this year.

Built around the theme, Baptised and Sent: The Church on mission in the modern world, Pope Francis is calling for the month to be marked in every diocese in every country, but he is quite clear he wants the celebration to be something extraordinary, something different, out of the box.

“I want there to be a mess in the diocese. I want you to go outside. I want the Church in the street,” he says. And he certainly wants it to be joyful, as he once again stresses the basic theme of his apostolic exhortation on mission, The Joy of the Gospel (Evangelii Gaudium), “without joy, we will attract no one.”

It is clear that his intention is to turn the Church upside down, to leave no stone unturned in revolutionising its approach to what he describes as the one activity that makes the Church of Jesus Christ what it is meant to be -mission in the world.

He describes mission as a challenge to every baptised person - to be close to Christ through encounter with him and to gaze upon the mess of the world as Jesus did in his time, with love. A gaze prompted by this type of love he calls a manifestation of God’s holiness in his own image.

The pope wants to stir the pot to the extent that his predecessor of 100 years ago did with his watershed apostolic letter, Maximum Illud, promulgated on 1 August 1919, when Pope Benedict XV called for radical changes in the Church’s approach to announcing the good news of Jesus Christ.

Although referred to by his biographer as the unknown pope, those who do recall him, remember him as the author of what has become the handbook for mission in the modern world. Benedict had harsh words for the missionaries of his day, reminding them that they should serve for the benefit of those to whom they had been sent and not the colonial desires of those who sent them.

And while Francis has harsh words for the missionaries of today who want to reduce mission to material aid, he also wants to reinforce that mission embraces not only those who take up a post in a foreign land, but also each and every person who has received the sacrament of baptism.

As the theme of this Extraordinary Month of Mission states, it is because we are baptised we are sent. Pope Francis explains that we are sent “because we are God’s love poured out, God’s holiness in his own image.”

And while Benedict pushed hard for the development of a local clergy in every area where the Church had been planted in order to increase its ability to listen with understanding, Francis is stressing the necessity to listen unceasingly to what we, as a Church today, must believe. To listen attentively to the reasons the Church holds hope and listen intently to the new commandment of love. 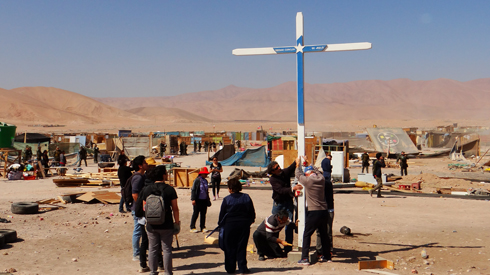 In Francis’ words, the underlying dynamic that must drive us always is love.

But like Benedict’s century-old call for a new wisdom in mission, Francis gives us a strong indication that he wants something out of the box. Like Jesus on the boat in the midst of the storm, he is counselling us not to be afraid of the paths the crucified and risen Lord may be challenging us to follow. He tells us not be afraid of the new things that come from the crucified and risen Lord. “These are beautiful novelties,” he says.

And while warning us to be discerning about the origin of novelties, as not all are prompted by the crucified and risen Lord, he says, “This boldness means pressing forward with courage, with the zeal of those who first proclaimed the Gospel.”

The introductory document gives us a few examples of missionaries from the past who pressed forward with courage to embrace the novelties suggested to them by the crucified and risen Christ. They are inspiring, but also spectacular in achievement and maybe difficult to identify with.

However, there are plenty of examples around our parishes of people of extraordinary ordinariness, who can inspire us to break out of our comfort zones at least a little and contribute that extra to the mission of God on this earth.

We are the people whom the pope describes as being immersed in the world, but ultimately we are not alone. We are members of a community of faith and love, and it is within that community we respond to the call to manifest God’s love in his own image.

The Extraordinary Month of Mission seems an appropriate time to ask ourselves as Australian Catholics what special contribution our experience of living our faith in this Land Down Under enables us to make to the peoples of the world.

Clues to this may lie in the history of the Church in Australia, which began in extremely humble circumstances and went on to build a formidable group of people of great dedication. If any of those who arrived on the First Fleet had been shown a snapshot of what would grow out of that circumstance, surely they would have had a hard time believing or even imaging what would bloom from their modicum of faith.

This is our story as a Church and if we can take inspiration from it, it challenges us to believe that any group of people, no matter how poor, disempowered, disorganised or ill educated, with the appropriate freedom of choice and opportunity, can really make something of themselves.

There is no shortage of people begging for someone to believe in them and since ultimately mission is a great challenge to our humility, it is good to remember that being judgemental, right or clever is not the same as witnessing to that image of God that dwells in us or listening intently to what we must believe.