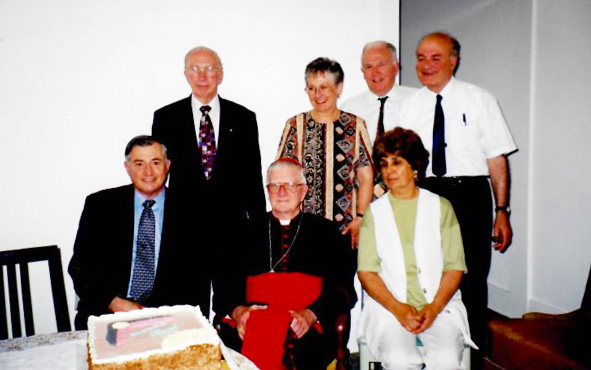 A pleasant surprise greeted me on returning from forty years on mission in Peru and Ireland. There was a letter from Dr John Casey asking about me as we had lost contact about twenty years ago. He gave his new address as Carseldine, Qld. So I quickly let him know of my retirement to St Columban’s House in Essendon, Victoria.

Our shared interest was in the Dundara Association of which he and Sister Ignatius Jenkins RSC were foundation members. Sister Ignatius, a nursing Sister at St Vincent’s Hospital, Sydney, was the initiator, constantly supported by Dr John Casey, a consulting endocrinologist at that hospital. Some twenty others accepted the invitation to join in the much needed Association. I was among them, influenced at that time by Gustavo Gutierrez in Lima. His Theology of Liberation was inspiring Columbans there. They accepted God’s plan to set the poor and oppressed free from any modern form of slavery or exclusion from society. For me, as a teacher of Scripture, I was moved to look afresh at the situation of Australia’s own First People in the light of the Gospel.

At the inauguration of the Association in 1974, Dr John became the first President. The name “Dundara” was chosen because it means dawn – a new dawn for aboriginal people around Sydney. The Constitution gave the objectives of the Association as:

My own involvement there ended in 1977 when I was appointed to work in Peru. The residence in Alexandria underwent considerable extensions which Cardinal Clancy opened in 1988. Two years later that residence was handed over completely to the Archdiocesan Aboriginal Catholic Ministry. Dr John has recently sent me his excellent short paper summing up the above history of Dundara. He has kindly also provided the attached historic photo of the inauguration of the extended centre by Cardinal Clancy. Sr Ignatius is not in the photo because the Lord had called her home a few years earlier.

Current protest marches and government dialogue about “parity” between the oldest and the newer Australians are revealing. The Holy Spirit is still leading all of us to understand and welcome all indigenous peoples as equally precious sisters and brothers in God’s global family. Chris Baker taught Scripture in Sydney for 20 years before heading off to Peru in 1977. Now retired in Essendon, this September he hopes to celebrate 70 years as a Columban missionary priest.

Columban Chris Baker is currently living at the Columban house in Essendon, Melbourne.