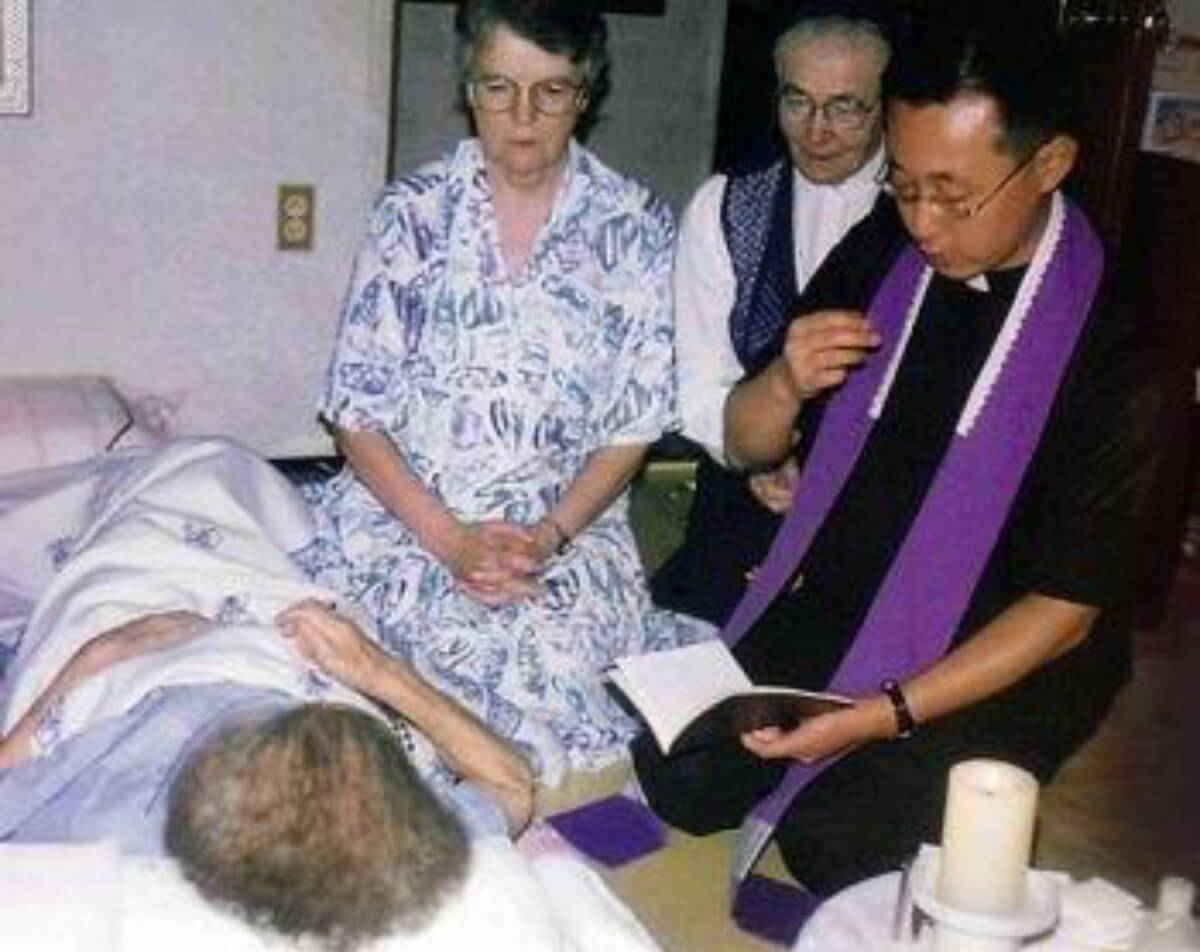 When I lived in Hallim on Jeju Island, I knew two delightful older people, Mrs and Mr Kim. I came to know them through the Isidore Development Association's Social Welfare Apostolate for the Aged, for which I worked. At that time, the couple took care of their son, Tae Gyu, and his young son, whose mother had left the family. Tae Gyu had been in the fishing trade, but the business failed, and he suffered from ill-health. He got cancer and was back home with his parents.

Mr and Mrs Kim were devout Buddhists, but Tae Gyu had no interest in any religion. When his mother told me about his illness, I began visiting him with Susanna, the parish catechist. We wanted to help him but also to support his elderly mother in any way we could. Soon afterwards, Tae Gyu took an interest in learning the catechism and asked us to teach him. Quite regularly, we visited him, and in a short time, he began to have some hope in life and believe in Jesus. He was anxious to learn as much doctrine as he could before being baptized.

Despite undergoing further treatment, after a few months, his health deteriorated, and he knew he was dying. One day he said, "Sister, ask the priest to baptize me now." The following day the priest came. A table was beautifully set up, with white cloth, candles, the holy oils and everything needed for baptism, confirmation, and the sacrament of the sick. It was a solemn and moving ceremony as the dying man received the sacraments with great faith and joy. Sitting quietly at his bedside, Tae Gyu's mother was taking everything in. She took part in the whole ceremony while her son very happily received all those sacraments. Full of confidence in God's great love for him, he was at peace. He chose the name Andrew for his baptismal name after the first Korean priest, a martyr.

Later, his mother told me that she had never seen anything more beautiful and would love it if all her family became Catholics. During all those months of preparation of her son, seeds were being sown in this great woman's heart; special words and thoughts were coming back to her.

However, she said that she and her husband, since they were teenagers, had responsibilities in the Buddhist temple and would have to keep going there. Needless to say, I respected her wishes and did not put any pressure on her. Andrew's (Tae Gyu) funeral Mass took place on July 5, the feast of St. Andrew Kim, whom he had chosen as his patron saint. All the family were present.

Susanna and I kept up our contact with them, and very soon afterwards, several of the family started to go to doctrine classes in the parish. One Saturday afternoon, the following November, during a special program for the elderly, Mrs Kim whispered into my ear: "Myself and my husband are going to the temple on Wednesday next to say goodbye, and on the following Sunday, we are going to the Catholic Church." That was exceedingly good news, and I was delighted to see them keep their good intention and to be baptized some months later. For their names, they took Maria and Joseph.

They continued to take great care of their grandson, too and brought him up in the faith. On his First Holy Communion day, I saw Maria weeping; she told me she envied children who had young mothers able to help and guide them. But, as I told her, she herself, in her gentle, loving way, was the best guide the little boy could have.

Maria and Joseph continued to live good and happy lives. I heard the priest holding them up as an example of marital love and fidelity. Indeed they were a gift to our parish. Some days before her death, Maria told a friend that she was proud to die believing in God. May she, Joseph and Andrew live now in everlasting peace and joy.

Sr. Elizabeth Taaffe from Ireland first went to Korea in the early 1960s. She worked as a social worker for several years and had a wide pastoral outreach. After over forty years, she was sent to London, where she visited the sick and looked after the poor. She is now residing in Columban Sisters' motherhouse in Magheramore, Ireland.