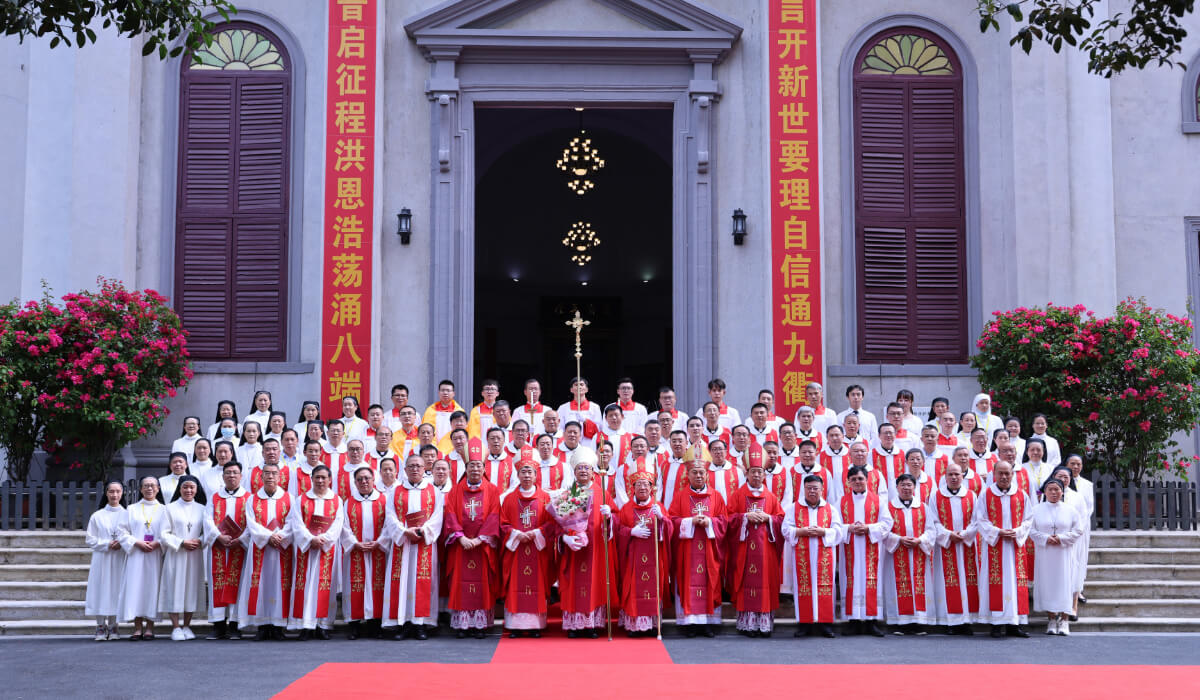 One evening in early September this year as I walked by St Joseph's Cathedral in the Hankou area of Wuhan, China, a level of activity far above normal was enough to indicate that preparations were underway for the ordination of a new bishop two days later. The wide square in front of the grotto was being hosed down. The recently renovated interior of the 145-year-old cathedral was glowing; its light shining out through the immensely tall open doorway on a warm summer's evening. All who were passing by on the street in this central area of the city could easily conclude that something important was taking place. From a distance it was possible to see a number of people gathered at the altar area, presumably practising the liturgical details of a ceremony that has been anticipated for 14 years.

In May 2007 the death took place of Bishop Bernadine Dong Guangqing. He had stirred controversy in 1958 when he was among the first group of bishops in China to be ordained without approval from Rome. Many years later he was reconciled with Rome. My recollection of attending his funeral Mass on a mid-week evening is that there was a similar level of attention to detail. At that time there were also many questions in the air about who would be the next bishop and just as important the question of when the role would actually be filled.

Fr Francis Cui Qingqi was one of the senior priests of the diocese since the death of Bishop Dong. For a number of years, he had been mentioned as a possible candidate to become bishop, his role as administrator of the diocese leading to an increased likelihood that he would eventually be chosen. The Vatican recently appointed him to be the next bishop of the diocese. The arrival of five bishops from other parts of the country in the early part of the week leading up to the episcopal ordination indicated that a high level of planning had been in place locally.

The appointment of bishops in China is a sensitive issue, the Chinese government seeking to have some involvement in the process. A temporary agreement between the Vatican and China has allowed for a number of bishops to be appointed since 2018 with agreement on both sides. While not without its difficulties, the view among some people is that a diocese has some possibility of maintaining a sense of direction if it has a bishop rather than the role being vacant for several years.

Wednesday of that week was the Birthday of the Blessed Virgin Mary and was chosen just a few weeks ago as the day for the episcopal ordination ceremony in Wuhan, the place of Our Lady being a special one for Catholics in China. Being the 8th of September, the Chinese preference for the number 8 also added to the understanding that the day was a good choice. The ceremony began at 8 minutes past 8 o'clock on Wednesday morning, choreography that seemed to echo the timing of the opening ceremony of the Beijing Olympics in 2008.

Those who attended the ordination ceremony said that it went smoothly. A choir had prepared for several hours each day for the previous two weeks. A report about the ceremony was available at midday on the country's main Catholic social media platform, the colourful and varied photos underlining that attention to detail was at a high level.

The number of people attending the ceremony was curtailed due to the recent emergence of some Delta variant cases in Wuhan. Those cases resulted in the closing of churches for five weeks. With the successful containment of the recent outbreaks, students returned to school as expected at the beginning of this month. However, the reopening of the city's churches did not happen at that time. After the ordination of Bishop Cui, it was announced that the churches in Wuhan would reopen the weekend after the episcopal ordination. This news was welcomed with joy by the Catholic community.

While not wishing to read too much into small developments, perhaps the reopening of the churches in Wuhan is an indication of what can happen when roles of responsibility are filled rather than left vacant for many years. That evening as I walked past there was an abundance of light flowing out through the huge doorway of the newly renovated St. Joseph's Cathedral. The hopes and prayers of many people are that Bishop Cui will work with the entire community to provide faith-filled leadership so that the Church can make a meaningful contribution to the lives of people in a place that has endured so much turmoil since the beginning of last year.