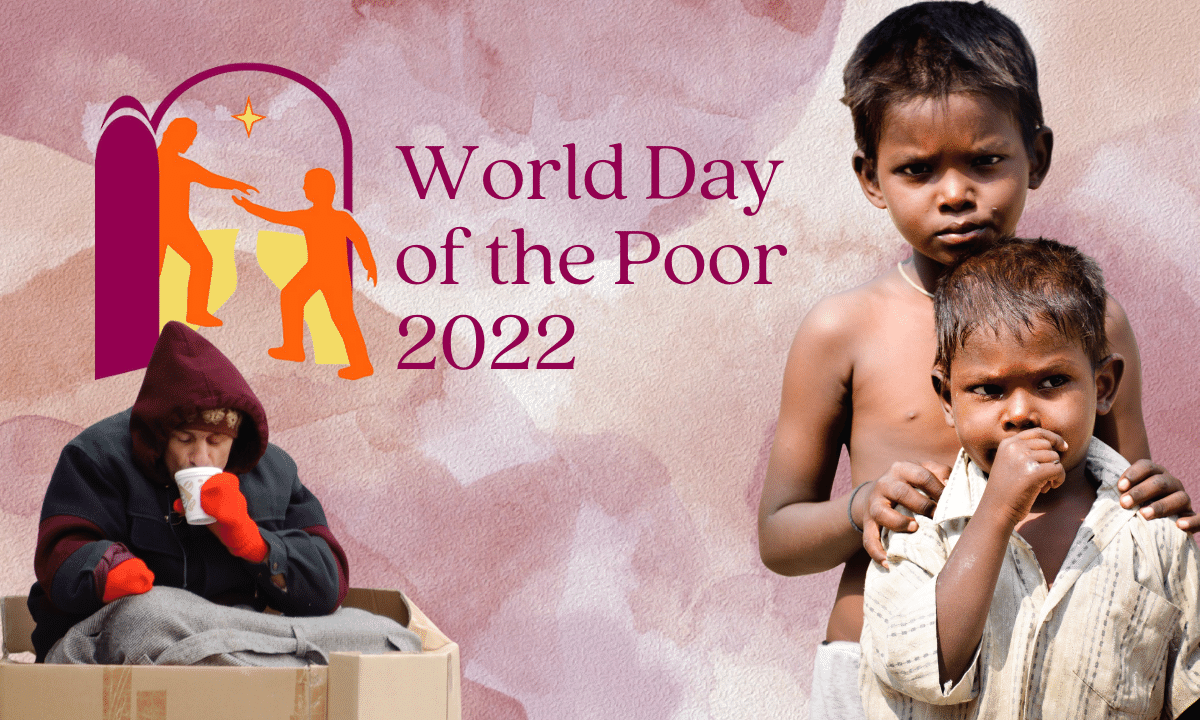 The World Day of the Poor is an observance of the Church that takes place on the Thirty-third Sunday of each year. Pope Francis established the World Day of the Poor at the conclusion of the year-long Extraordinary Jubilee of Mercy in November 2016, as a further boost to inspire pastoral outreach and the witness to mercy. In his message to announce the annual observance, Pope Francis said, “our world continues to create new forms of spiritual and material poverty that assault human dignity. For this reason, the Church must always be vigilant and ready to identify new works of mercy and to practise them with generosity and enthusiasm.” In September 2016, Pope Francis had already declared care for our common home as an eighth work of mercy in which he called for a grateful contemplation of God’s creation, an acknowledgement of the human contribution to ecological devastation and a firm resolve to live and act differently to build a better world.

Pope Francis says situations of war is the context for the World Day of the Poor 2022, which falls on Sunday, 13th November. The Pope says, “what great poverty is produced by the senselessness of war.” Indeed, as turmoil continues to grow in many quarters, now is the moment to stay focused on mission. The Pope reflects on the inspiration and generosity of entire populations, communities and families who do just that and open their doors to welcome and support refugees fleeing peril.

Columban missionaries are committed to analyse, reflect upon and respond to situations of poverty and its root causes. This process is made all the more challenging by compounding emergencies including armed conflict, the global energy crisis, economic downturns and worsening climate change. Together these are being described as the poly-crisis of our times. For people of faith this is not a time for despair. We might confront our individual and communal overwhelm and ask ourselves what is the one thing I/we can do in our sphere of influence at this time. In a presentation with Edmund Rice International in October 2022, Brother Philip Pinto CFC said “God is all the time inviting us into the more. This is an evolutionary God beckoning us from the future.”

In addition to the pastoral imperative of the Church to respond to need, World Day of the Poor draws attention to the deeper message of the Gospel that teaches we are in this world not merely to survive but to live dignified, meaningful and happy lives. This stands counter to expressions of economic progress at all costs that diminish the value of living and exclude the majority. Cardinal Michael Czerny SJ from the Vatican eloquently stated in September 2022, unjust models of economic development “denigrate authentic living, push fake imitations of a happy and fulfilling life, promote pessimism and a culture of why bother.” The message of the World Day of the Poor therefore shows, whilst there is a poverty that humiliates and kills, there is another kind of poverty that concentrates on what is essential rather than the accumulation of excess as if the planet has no limits, and the sharing of lives out of love, to bring hope and peace for all.

Social and economic injustice often goes hand in hand with environmental injustice. In coming weeks world leaders are gathering to agree on next steps to address the environmental crisis of climate change at COP 27 6th-18th November 2022 and biodiversity loss at COP 15 in Montreal 7-19th December. Columban missionaries with the wider Church are taking part in local and international commitments to address environmental degradation and its impacts on God’s people. The Church has a unique role to play in her witness to mercy, commitment to persevere in the painstaking work of advocacy and keeping faith in a vision for a renewed creation, God’s people and planet together.