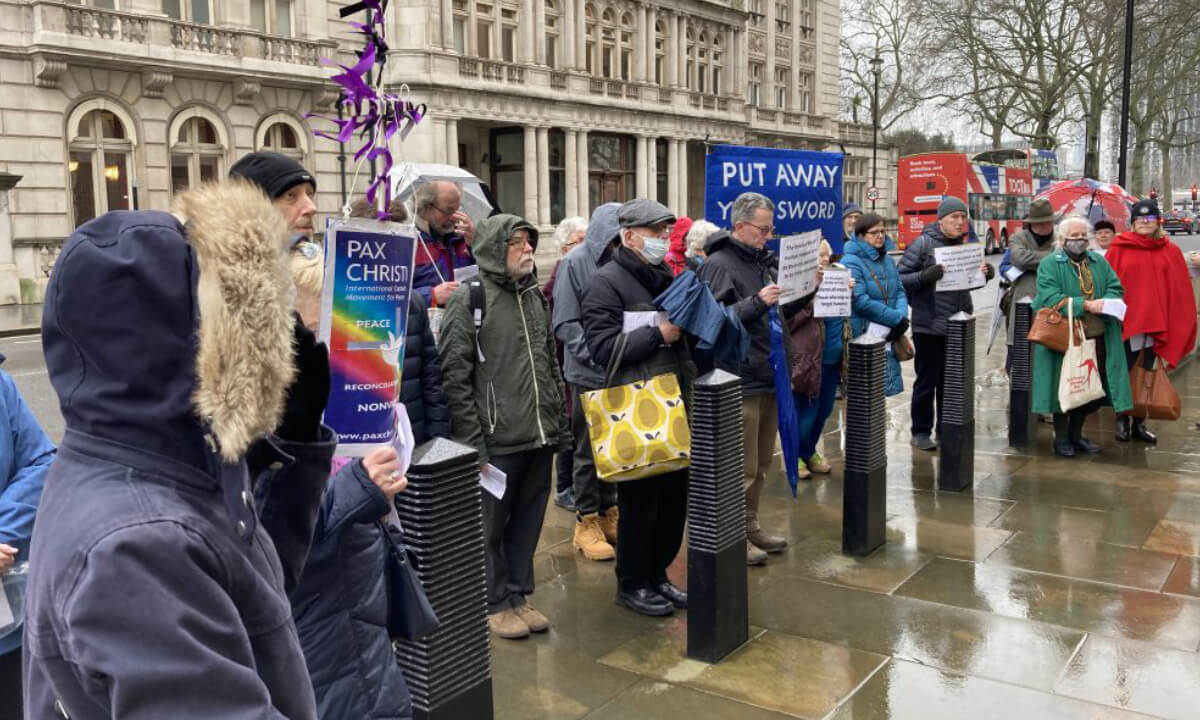 A Columban Statement from 2021 states,

“We share the anguish of people around the globe who have already suffered from the use of nuclear weapons and experience the despair of many who see their hope for a dignified life frustrated by the misappropriation of the world’s resources. As Christians and people of goodwill, we must be actively involved with those who raise their voices in protest on this crucial issue of our times because it is at the heart of what it means to defend life and protect creation, now and for future generations.”

This year Columban Mission supported a national Zoom prayer for peace, organised by Pax Christi England and Wales and Christian CND, which attracted around 100 participants on the evening of Ash Wednesday. It linked with the call from Pope Francis for a Day of Prayer for Peace, particularly for the crisis in Ukraine.

The prayer focused on a call to Repentance, with the image on screens of a peace banner ‘No Faith in Trident’ and an acknowledgment that humanity “is destroying and squandering the resources of the Earth.” Romans 12 was read out, with the lines, “‘Never pay back evil with more evil….. Do all that you can to live in peace with everyone.”

There was also a call to Lamentation, where participants held up images and names of people and places they wanted to pray for. These included children living in the shadow of war in Ukraine and the West Bank and the destruction of the beauty of several countries, including Iraq, Syria, and Afghanistan. There was a reminder of the cost to life of the UK’s commitment to war and death through military spending.

Change of Heart was the third theme, urging moves away from a culture of death towards a culture of life. The words of Pope Francis spurred special prayers for Ukraine in recent days as he lobbies for peace as well as praying for it. Bruce Kent, who handed a letter from CND into the Russian Embassy two days earlier opposing all military action, feared hearing politicians speak about the possible use of nuclear weapons. “That would be catastrophic,” he warned.

Then a focus on Thanksgiving where Sr Wamuyu Teresia Wachira, Co-President of Pax Christi International, spoke from Kenya about Pax Christi being “a sign of hope in the world” even though members can often feel like they are “crying in the wilderness”. She was proud that Pax Christi is showing a different path to that of violence; instead, choosing a path of peace, justice, equality and respect for the natural world.

The service followed a full day of in person Pax Christi witness events – usually in the rain – in Coventry, Leeds, Liverpool and London. Pax Christi Scotland prayed for peace at the South Gate of Faslane nuclear base in Scotland.

Columbans were among the 30 people outside the Ministry of Defence in Whitehall, where military violence is planned. They stood before the front entrance of the building and repented, “the moral blindness of our nuclear intentions.”

The online service suggested that Christians have responsibilities to repent war policies, name them as challenges to the Gospel, and invite the government to turn away from military security based on threat and fear towards a security based on cooperation, understanding and human rights. Participants were reminded that Ash Wednesday is a serious call to conversion and nonviolence.