Partner in mission since the age of 10 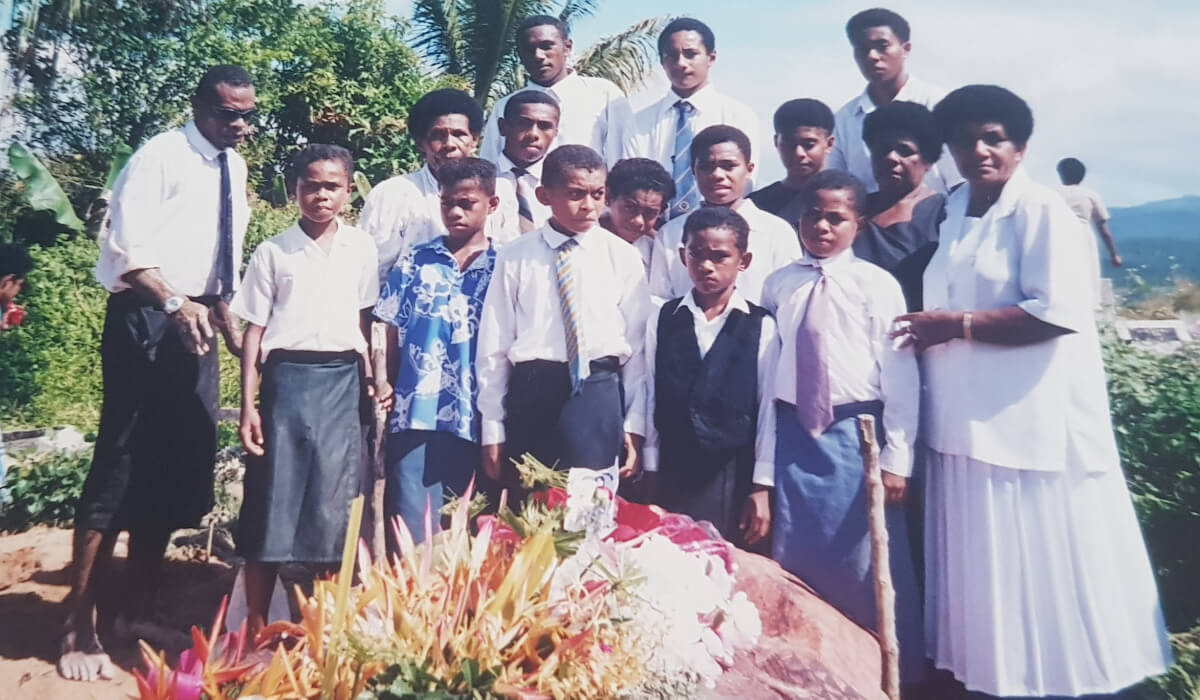 Sisi and family at the burial of her husband, Mr Asipeli Moce in 2001. Photo: Fr Pat Colgan

Sisilia Sigatabu, born on 16 Aug 1942, began life at a settlement at Nadarivatu (the deep interior of Fiji) because her father Valerio was a carpenter there. She was baptised 2 years later by the French Marist Fathers at Varoka, Ba. She did her primary schooling at Votua Catholic School (the coastal area of Ba parish) for Classes 1-3, and then, when her father was invited by the newly arrived Columbans to be caretaker at Varoka, she completed Classes 4-8 at St Teresa’s School. In fact, her father and uncles had largely built the St Peter Chanel Parish Church there, from timber donated by Sr Hugh Ragg OBE. Seeing the difficulty that village children had in completing their primary education, the Columbans opened a boarding hostel at Varoka, at which the girls were monitored by the Marist Sisters (mostly Irish) and the boys by the Columban priests. Sisi and her sisters boarded there.

Valerio died in 1958, and although Sisi had passed “Secondary Entrance”, her family could not afford the fees, so Fr Dermot Hurley SSC stepped in financially and sent her to Loreto High School on the island of Levuka. Unfortunately, she failed her “Cambridge Senior” (whose results took 3 months to arrive on the slow boat from England !), so another Columban, Fr Seamus O’Connor stepped to send Sisi back to Loreto to repeat the exams. However, Sisi refused to go, and Fr O’Connor got her a job at Morris Hedstrom store, Ba instead as a docket clerk.

It was there that Sisi fell in love with Mr Asipeli Moce (a Methodist) and in time eloped with him to the Sugar Mill compound quarters in Ba. This was a daring move in those days (and not in line with Church teaching). Despite that, Fr O’Connor visited them and persuaded them to get married in the Catholic Church, which happened on 29th Sept 1962. Fr O’Connor had taken the role of Sisi’s father (who was deceased) as the one to receive the traditional gifts of apology for elopement (nai bulubulu) and promptly helped Sisi’s mother pay for the wedding meal.

After the birth of her first three children, Sisi resigned from her work at the store, staying home. But the new PP of Ba, Fr John Doyle, asked her to volunteer for the position of “licenced teacher”, which then became “Emergency Trained Teacher”, both of which the colonial government had introduced due to the extreme shortage of teachers in the colony.

In 1969 she became a civil servant, with the grand weekly pay of 8 Fijian dollars.

She was appointed to St Teresa’s School, where she remained until 1985, being then sent as Assistant Head Teacher of Votua Catholic School, but when the Marist Sisters decided to leave St Teresa’s in 1995, they invited her back to town to take up their legacy as the first lay Head Teacher. She remained at St Teresa’s until 1998, when, turning 60, she had to take compulsory retirement. 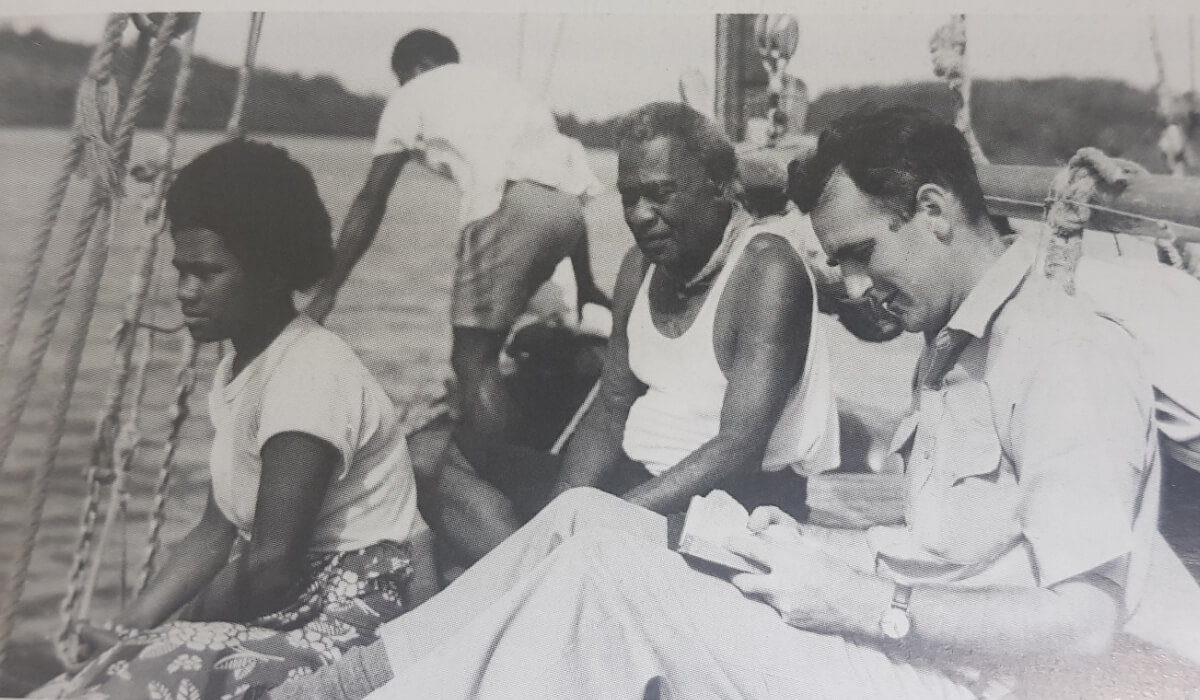 In 1999, Br George of Xavier College (founded by the Columbans, but now in the hands of the Brothers of St Gabriel of Montfort from Kerala, India) invited her to be a teacher of the Fijian language, and then employed her for a further 4 years from school funds, as a teacher of Religious Education.

Looking back, Sisi emphatically says, “Without the Columban Fathers, I would not have become what I did”. She has some funny memories of her encounters with the early Irish priests. One, Fr John Doyle, used to yell each morning from the presbytery for his caretaker to “mix the grog’ (for drinking before lunch) and Sisi decided to make this part of a school drama production. Hearing of this, and calling her aside, Fr John, with a smile on his face, called her a “scallywag” – a word Sisi had never heard before. Part of a school song also included the children singing, “Fr Doyle has a puncture in his van, and we are going to fix it with chewing gum”.

On her 80th birthday (and 70th anniversary of SSC in Fiji), Sisi wants to assure the Columbans of her fervent prayers for vocations, and expresses often how lucky Ba has been to have them in Ba almost continuously for the last 70 years. She feels that sometimes parishioners have taken them for granted, and not recognised their sacrifices, plus the comparatively light (financial) obligations that Columbans have imposed on parishioners. She has always appreciated their frankness and honesty with her.

A final memory she has concerns her husband, Asipeli. Getting increasingly concerned about the eternal peril of his soul by not entering the Catholic Church, Fr Kevin Kehoe once advised her, “Sisi, better Asipeli die a staunch Methodist rather than a confused Catholic”! However, when Fr Pat Colgan many years later, anointed Asipeli on his deathbed, she described how his eyes shone with joy, and in that sense, he did accept the Catholic faith in the end. In an earlier interview with Fr Frank Hoare for his book “The Turning Wheel – Columban Missionaries in Fiji, 1952-2017”, Sisi describes Fr Doyle’s admonition to her, when she had to go to Suva for 3 months to catch up on her studies, leaving Asipeli behind with 3 small children, “Sisi, don’t think of staying there at weekends – you must come to help your husband”. Sisi admits this advice probably saved her marriage.

She also appreciated Fr Frank Hoare’s book on “Intercultural Exercises in the Classroom” which she used frequently in Xavier College at a time when relations between Fijians and Indians were rather tense. She also remembers that 20 years before the Archdiocese adopted the “Small Christian Community” concept at the heart of its pastoral plan, Columban parishes were already advocating scripture sharing in small groups. 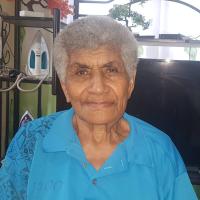 Sisi believes that her spiritual life over the last 70 years has been totally moulded by the Columbans and Marist Sisters. After all, from the age of 10, her life has been entwined with theirs. Although about to celebrate her physical birthday, she regards her “real” birthday as 18th Dec 1944, the day she was baptised a Catholic. It was finding this date out that drove her to make sure that all her own children were baptised promptly (all but one by Columban Fathers) and, at Fr Paul Tierney’s invitation, she became a baptism instructor in the parish, as well as a founding member of the Columban Companions in Mission.

Happy birthday, Bu Sisi ! May you have many more, and thank you for walking with us, being patient with our shortcomings and so unstinting in your praise for the few things we got right.