How our six priests died in the Philippines 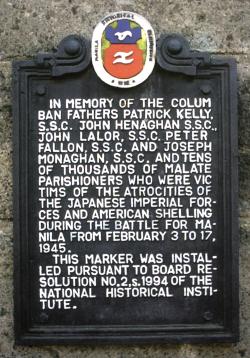 The five priests killed at Malate have been called the Malate Martyrs.  Missionaries who stay with their people during war run the risk of being killed with them.

The sorrowful news of the deaths of six priests of St Columban’s in the Philippines reached us with the news of the fall of Manila. The facts were officially confirmed some time later, and with the arrival in Australia of the former Philippine internees, we received additional details of the sad events. It appears that five of the six priests had been murdered by the Japanese.

Here are some extracts from the accounts we have received:

"Fr Vernon Douglas [who went to the Philippines from New Zealand in 1938] died nearly two years ago, a death worthy of the highest traditions of missionary heroes.  His parish of Pillila, thirty five miles from Manila, was a centre of that Filipino guerrilla activity which hastened the liberation of the country.

"Spies had reported to the Japanese that guerrillas frequently visited the church and convento (rectory) to go to Mass and confession, and that Fr Douglas had been called to the mountains to minister to wounded men. The Japanese military police thereupon demanded to know what the guerrillas told the priest when they came to see him. Fr Douglas replied that this was a question they had no right to ask, and that to answer it would go against his conscience.

"For this answer the priest was severely beaten and that night was taken to the baptistery of the neighbouring church of Pila. Here the investigation under torture was continued for three days and nights. The Filipino parish priest told me that Father must have suffered a martyrdom during those days, as his cries and groans were almost continuous.

"At the end of three days he asked the Japanese to call the Filipino priest to hear his confession. Strange to say, they granted his request. The parish priest said that he found Fr Douglas in a pitiable condition, covered with blood and wounds from head to foot, and with all the appearance of a dying man. He made his confession and asked the priest to convey the news of the happenings to the St. Columban priests at Malate, Manila.

"That evening he died, and the Japanese removed his body. In spite of every effort made by the Apostolic Delegate to the Philippines, it has never been discovered."

"Concerning the deaths of the five priests at Malate, less is known. They all died about February 9 of this year, just before Gen. MacArthur entered Manila.

‘Fr John Lalor was killed by shell fire while attending to his duties in the hospital.

"That same afternoon, Frs Henaghan, Kelly, Fallon and Monaghan were arrested by the military police and taken to a nearby apartment house. A few days later, the bodies of Fr Henaghan and Kelly were seen and recognised lying outside the house. They were dressed in their soutanes and showed signs of a violent death. They were buried where they lay. Frs Fallon and Monaghan were never seen again; their bodies must have been buried under the ruins of the apartment house.

"The church and convento at Malate were utterly destroyed."