The extraordinary story of Fr Peter Kibe who walked 4000kms to get permission to become a priest.

Samuel Wansiru of Kenya, winner of the Olympic marathon at Beijing, lived and trained in Japan for six years. Asked in a Japanese TV interview what he had learnt about marathon running in Japan, Samuel answered, "I learned to endure." The Japanese word he used was 'gaman.' This word reflects the traditional Samurai Code - The Way of the Warrior (Bushido). 'Gaman' has the nuance of stoic fortitude and perseverance. It is a rigid word.

Fr Peter Kibe, a Japanese martyr beatified with 187 others in Nagasaki on November 24, 2008 had the Samurai spirit of 'gaman' as a natural gift, developed and refined by prayer, setbacks and suffering.

Kibe Kasui was born in 1587 in southern Japan. His parents were staunch Catholics. They named him Peter at baptism (Kibe is a family name, Kasui a given name). The year Peter was born, the Shogun Hideyoshi issued an edict forbidding the practice of Christianity and ordered all foreign missionaries to leave Japan. But as happens even today, the orders of central government in Edo (Tokyo) were not always carried out in the distant provinces. The persecution at first was haphazard and arbitrary.

Nevertheless they were unsettled and dangerous times for Christians. 26 were martyred in Nagasaki when Kibe was 10 years old. In this situation Kibe felt called to be a priest. Peter entered the Jesuit seminary in Arima but he did not complete his studies nor was he admitted into the Jesuits. He waited patiently. He worked within the persecuted Christian communities for eight long years.

In March 1614 as Peter took the body of his martyred friend, Machias Schichirobeii to Nagasaki for burial, he realised into what deep waters the Church in Japan was heading. Again he felt the call to be a priest for his suffering people. With this intention he went to the Jesuit seminary in the Portuguese colony of Macao near Hong Kong.

But the discrimination between colonial and indigenous students that had caused Francis Xavier such grief was again rearing its head. Some Jesuits in Macao, as in Goa in Francis Xavier's time, felt it was not yet the right time for indigenous vocations. Kibe was refused. He sailed to Goa and was turned away again. What should he do? He still felt a strong call to be a priest.

In 1617 Peter Kibe set out from Goa for the Jesuit headquarters in Rome! He had no money, he travelled on foot. (I suggest you open your atlas to trace his route. From Goa he travelled north through India, today's Pakistan, Iran, Iraq, Jordan and followed a branch of the Silk Road). The route was part desert, always dangerous. Peter walked almost 4000kms over three years until he reached Jerusalem, probably the first Japanese to arrive there. 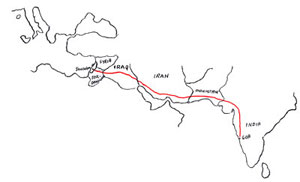 After such a journey, the Way of the Cross meant a lot to him in his weariness. Now he was travelling in the footsteps of Jesus. The thought gave him new life and strengthened his endurance. (Christian endurance is travelling the road of life aware that Jesus walks with us.) From Jerusalem Kibe went to Rome arriving there in 1620. He knocked on the door of the Jesuit Generalate to present himself. Peter was accepted, took his vows as a Jesuit and was ordained a priest six months after arriving in Rome. (This shows the genuinely inclusive missionary policy of the Jesuits) as distinct from the discrimination peter had found in Macau. He was 33 years of age, 20 years after his first decision to become a priest.

With the blessing of his Superiors he set out for Japan where cruel persecution and martyrdom had increased. He boarded a ship in Lisbon, sailed around the Cape of Good Hope, then up to Mozambique and on to Goa (India), Malacca (Malaysia), Ayutthaya (Thailand), Macao (China) and finally to Manila (Philippines). En route he was shipwrecked three times.

In Manila he met an old friend from seminary days, Michael Matsuda. Familiar with the sea since childhood, Peter Kibe bought a small, leaky boat with a tattered sail and, together with Michael, set off on the final leg of his journey. Before leaving Kibe wrote, 'For the salvation of the people of my country I want to keep going. Trusting in the wind of God's grace, we hoist our sails.'

As sometimes happens, God was somewhat overgenerous! A typhoon hit and Kibe was shipwrecked yet again. Eventually they reached Kagoshima in the south of Japan in 1630. He had been away from there for 16 years. Now he was a priest, a Jesuit missionary, back to help his people and to encourage them to endure.

Throughout the country the Tokugawa Shogunate had erected noticeboards proscribing Christianity. Rewards were offered for the betrayal of Christians and a greater reward for priests. In 1638 he was betrayed for money. He was taken under escort to the capital Edo (Tokyo) for rigorous interrogation and torture with the aim of getting him to deny his faith.

His interrogator was the infamous former Christian, Inoue. In his written deposition Inoue wrote, "Peter Kibe has not fallen. He has also fortified his fellow prisoners. His sentence is death by strangulation." Fr Peter Kibe was executed in July 1639. He had run his race, finished the course and kept his faith. He had worked in Japan as a priest for nine years. He was 52 when he died. Fr Peter Kibe loved Christ; he loved his country and its culture, he loved his people. He was 100% Christian and 100% Japanese. He had the endurance Jesus spoke of. "You will be betrayed even by parents and brothers, relations and friends; and some of you will be put to death... but not a hair of your head will be lost. Your endurance will win you your lives" (Lk21:16-19).

Among the 188 martyrs beatified on November 24 were the following:

30 children - from the age of one year to 14 years died with their parents.

"Though many were samurai and knew how to fight, they chose the path of non-violent resistance and that is significant for people today." Cardinal Fumio Hamao.

Fr Peter Kibe had written, "Let us hoist our sails trusting in the wind of God's grace."