The Way We Were - Jamaicas caste system

There is a terrible caste system in Jamaica.  It is awful." These words were spoken to me by a middle class white Jamaican. Considering his stand 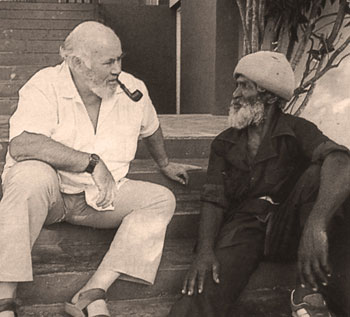 ing I was a bit surprised at his frankness and deep feeling about this injustice.

The motto of the country is "out of many, one people." Like most mottoes it is an ideal, not a fact.

Slavery is blamed for many things. It is often said "Why not forget it and get  on with living". This is easier said than done. Attitudes are deep and don't die or change easily. This is true of the descendants of the slave owners.

It is simple to drop a "Mc" or "O" on the front of a name or a "ski" or "i" at the end. One can even change a name with the time and effort get lost in the crowd and be  accepted. But you can't change the colour of your skin and you can't get lost in the crowd.  You are always different and a lot of people won't let you forget it.  So what is
the use of trying?

The British colonies were settled mainly by English speaking white Protestants, most of whom had no previous contact whatsoever with darker skinned peoples. The basis for racism lay not in what the English saw or experienced but in what they were.

By the time  the first black man reached the New World the English stereotype had already been formed. It began with colour. Before the 16th century and before the concept was in any way involved with human beings the English had affixed "black" with a long list of negative meanings. Black had come to mean soiled, dirty, foul, having dark or deadly purposes, malignant, pertaining to or involving death, disastrous, sinister, wicked, indicating disgrace, liable to punishment.

It was the opposite to white in the English mind, as filth was to purity, ugliness to beauty, Satan to God. Thus black was a powerful and evocative symbol which surfaced whenever Englishmen came intocontact with black skinned people or even heard of their existence.

In English eyes the African was a heathen and they linked his "heathenism" with his blackness and saw the hand of the devil at work.

The stereotype was formed long before the English began their colonisation of the New World, therefore one cannot ascribe prejudice against blacks to the institution of slavery. The order is all wrong. First came the image, so to speak, then the blacks and finally the institution.

The institution perpetuated and strengthened the white man's view of the black man but did not create the view.

With the abolition of the institution of slavery the deep set racial prejudice remained. It continues to the present day, at times covered over, disguised, but very real and very lasting. It permeates all areas of life.

"There is a terrible caste system in Jamaica." This is true not only of this island nation but throughout the world. It is a fact in our areas of living, our lives. Our attitudes and actions contribute to perpetuating it. We must examine our attitudes and change them so that truly worldwide we can say it and mean it - "out of many, one people" - God's people.