Columbans experience the earthquake in Chile 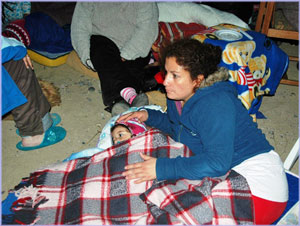 ‘It was a terrible shock to be awakened from deep sleep at 3:34am at the beginning of the earthquake,” said Fr Dan Harding. “I was awakened by my small dog barking and the birds outside fluttering wildly.  I thought that the neighbour’s cat must be at the birds. I got up and turned the light on. Just then the earthquake started in great intensity and all the electricity cut out. I was lucky to get outside and hold on to a fence in the darkness as the earth, trees and buildings around me shook wildly. It was an extremely frightening experience. The earthquake lasted for three minutes.”

He added, “Luckily none of us in the Columban Centre House were hurt and there was only minor damage to the buildings. I spent the rest of the night with hundreds of neighbours out on the footpath in pyjamas in the cold morning air.

Much of the central part of Chile with over 80% of the population has been badly affected by the earthquake and the following tsunamis along the coast. Over 2,000,000 people have had their homes damaged or badly affected. We have received 90 after shocks which will continue for months ahead. Some of the aftershocks like one this morning at 8:30 was a small earthquake in itself at 6.5 on the Richter scale.”

He wrote, “The earthquake was followed 20 minutes later by a tsunami along the Chilean coast as far north as Valparaiso which is on the coast near Santiago. In one coastal town a ferris wheel was dragged upright a distance of 250 metres by a tsunami. One woman interviewed on TV was washed by waves nearly three kilometres from her camping ground and left unconscious on top of a hill.

Most damage in Santiago is in the older colonial part of the city.  There are families sleeping in all the parks, plazas and outside their damaged apartment buildings. Many beautiful colonial style churches have been damaged or destroyed. All around Santiago and on the main highway to the south, overpasses have collapsed effectively destroying much of Chile’s advanced highway system.

Fr Derry Healy writes from Valparaiso, “I thought someone was trying to break into the house as the woodwork creaked and the front door vibrated. Soon I felt the whole house shaking and I just leaped out of bed and ran into the street. Our house is wooden and on stilts on the edge of a ravine. I wondered if it would fall into the ravine? I felt like it was never going to end.  We gathered the people around away from buildings and electricity wires and got a fire going and made a 40 litre pot of tea. Luckily we have a supply of cups in the ecological centre.”

Fr Harding adds finally, “Please keep the Chilean people in your prayers. We will be organising special Masses and collections and fundraising activities in all our parishes.”

Read more stories from the The Far East, April