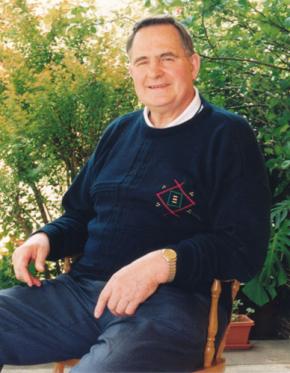 Fr Connolly pays tribute to a friend and former Superior General of the Columban Fathers.

It is a great privilege in life is to know a man who is thoroughly good. It expands your spirit and gives you great confidence. For me, Columban Fr Nicholas Murray (1938-2011) was above all, a thoroughly good man. I got to know him well because for the 12 years he was Superior General, I was his Vicar and friend. We shared good times and testing times and I never found him small-minded or malicious.

Nicholas was a big man physically. Actually there was nothing small about him. He also had a big mind and heart. He wasn’t an intellectual or academic. His intelligence was powered by his natural virtues. He was a generous man, a man of integrity and a hard worker who had few prejudices and piles of common sense. His intelligence was freed and enabled by the fact that he didn’t take himself seriously. He would often say, “Noel, I have received the blame for things I had nothing to do with but also the credit for things I had nothing to do with”. With that spirit he wore authority easily. As one of his class mates has said “he never felt superior or inferior to anyone”.

Nicholas was a “man’s man” and enjoyed being with people. He was happiest when visiting Columbans in our various mission countries. He was a good judge of character, although his natural tendency was to trust you.

I found this his greatest strength as a leader. His trust encouraged trust and confidence in others. He was our leader at a time of change, and to that time he brought stability, confidence, direction, good humour and energy.

As Superior General he introduced the Society to planning for the future.

He encouraged our efforts at justice and peace. He opened a Common Theologate. He put the Columban Lay Missionary movement on a sound basis. He oversaw the development of a new retirement home for Irish Columban priests and built up the fund to ensure our elderly retired priests would be looked after. He established the China Mission Unit and after finishing his 12 years as Superior General he volunteered for China. For two years he taught English at the Sichuan International Studies University in Chongqing.

Although Nicholas spent most of his life in leadership, he enjoyed working as a pastor and student chaplain. He spent 22 years in the Philippines, a lot of that time as Chaplain to Student Catholic Action. His natural instincts and preferences were always pastoral.

In 2008 he was diagnosed with leukaemia and for three years he endured many kinds of therapy without success or complaint. I used to ring him occasionally and although I often wondered what I would say to cheer him up there never was any problem. We would chat about all kinds of things. It was the same on my last call just before he was transferred to the Hospice.

He died peacefully and confidently on Holy Thursday having travelled his own way of the Cross with Jesus.

A good man is always missed but the good they do does live on and their memory continues to sustain and inspire us.