Look to the Child 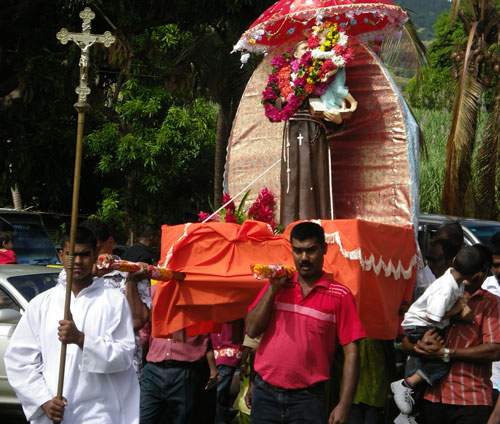 The feast of St Anthony of Padua in Raviravi, Fiji attracts many races.

Each year in the small cane farming community of Ravi Ravi, half way between the towns of Lautoka and Ba in Fiji, a unique and important ceremony takes place. It’s the Feast of St Anthony, June 13. The little church becomes the centre of attraction for the festival which these days can be a bridge between peoples.

The feast is transferred to the nearest Sunday and celebrated in much the same way as it was when brought to Fiji by the present community’s South Indian forefathers over 100 years ago.

After Sunday Mass the statue of St Anthony is reverently carried around the church compound three times, attended now in huge numbers by people of all races and religions in the area. In a country divided and wounded by coups and their aftermath, this day is a rare sign of hope and unity.

After the procession, family groups come to perform arti (a traditional gesture of reverence), touch the feet of the statue or leave money before it, in either supplication or thanksgiving for favours received from the Saint over the last year.

How devotion to a Portuguese friar of the 12th century who exercised his preaching ministry within the confines of France and Italy, ever got as far as South India and from there on the girmit boats to Fiji, remains shrouded in mystery.

No doubt the influence of the early European missionaries to India played a part. But the tenacity of the Indians’ devotion to the saint has developed to a new level here in Fiji.

The Columban priests who serve in the nearby Ba parish, officiate at this ceremony each year and are familiar with the cultural touches of ‘shenai’- South Indian dancing and playing that occasionally accompanies the procession. Over the years, we have tried to give space to Fijians and other cultures to present their prayers in their own appropriate ways at this feast which touches a chord in all the people of Fiji.

Famed for his ability to find lost objects, surely the greatest gift St Anthony would want us to have on this day is to “find” and never lose the Child in his arms, the one in whom “there is no more Jew or Greek, no more slave or free-born, but we all drink of his one Spirit” (1 Cor 12:13). This is the message Fiji, the Pacific and the whole world dare not ever lose!

But this hope has to be fleshed out in our lives and actions for Fiji to move forward. As the Saint said so powerfully in a homily for the Feast of Pentecost:

“Language comes alive when it speaks by deeds! Enough of talking; let actions speak! We are bloated with words and empty of works!” (Sermons 1: 226)

Fr Patrick Colgan has been a missionary in Fiji since 1994 and works with the ethnic Indo-Fijian community.