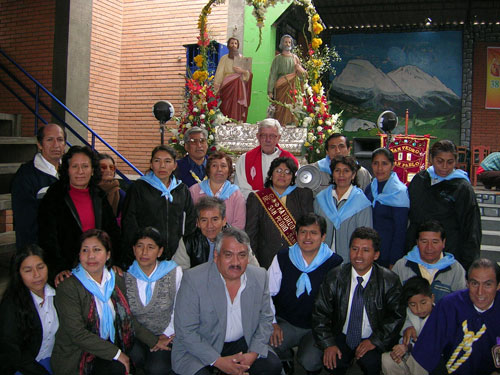 Columbans hand over a parish to the local Church in Lima, Peru

Over the past 60 years Columban missionaries and their Diocesan Associates have established and developed 24 parishes on the north side of Lima, which has grown from about 50,000 to over 2,000,000 residents since 1950. This rapid growth resulted mainly from the massive internal migration from towns and villages all over Peru.

“San Pedro y San Pablo”(St Peter and St Paul) is one of these 24 parishes and we have been there longer than in any other - 44 years. The following Columbans took up appointments to this parish: Tom O’Brien (Australia), Richard Prescott (US), Peter Woodruff (Australia), Noel Kerins (Ireland), Rolando Aniscal (Philippines) and John O’Connell (Ireland); as did also the following Diocesan Associates: Gerry Hanlon (England), Charles Byrne (Ireland), Pat Ward (Ireland), Thomas Park (Korea) and Marino Nanjha (Myanmar).

In each parish we have established and developed our mission in the spirit of our Constitutions which spell out our roles: (a) help Churches mature until they are able to evangelize their own and other peoples, (b) foster in local Churches an awareness of their missionary responsibility. We have striven to do this through witness, ministry and dialogue from the standpoint of solidarity with the poor.

The Diocese of Carabayllo, which includes 42 parishes located on the north side of Lima, was formed on February 14, 1996. Lino Panizza, a Capuchin Friar who had worked in various parts of Peru, was named bishop. He continued the push for more local priests and we have now handed over 20 of our parishes to direct diocesan control. This would have been impossible in the early years as there was only one Peruvian diocesan priest in the north in the late 1950s and now there are nearly 50.

I have been working in this parish since 1983. I feel sad at the thought of leaving but I can see that it is the right thing to do at this stage.

My younger companion, Marino from Myanmar and I have talked the matter over with the Columban Director, Fr Tony Coney, who has also had conversations with the bishop. We are proposing that the handover date will be June 29, 2011, the parish feast day.

For Columbans and Associates it has been a great privilege, joy and blessing to have worked in this parish. We have witnessed and supported the complex tasks of community development in the areas of housing, installation of water and sewerage infrastructure, connection to the electricity grid, roads and footpaths, health and education.

We recognise and congratulate the Sisters of Mercy who have done so much to develop healthcare services in the area, helped in the grassroots work of accompanying basic ecclesial communities, supported the formation of communal kitchens in times of economic crisis, established handcraft workshops and organised marketing outlets, and so provided work for many women for the past 30 years.

We will never adequately acknowledge our debt to so many lay men and women of all ages who have promoted and run a variety of parish catechetical programs; nor can we fail to acknowledge our benefactors who have made all of this possible.

All faith formation has been in the hands of parish groups composed entirely of lay volunteers who have participated in summer training programs in our local deanery and, in more recent years, in the Columban Centre for Mission Studies.

The hundreds of committed laity with whom we have worked over the years understand that we would like to continue accompanying them. However, they, like us, have become aware that the understanding of Christian mission has developed over the years. They no longer see themselves as a relatively passive faithful to be served and led by priests and religious. They strive to live their Christian faith in the spirit that Pope Benedict described in his address to the assembled Latin American bishops at their continental conference in Aparecida, Brazil, in 2007:

‘The Church has the great task of guarding and nourishing the faith of the People of God, and reminding the faithful of this Continent that, by virtue of their Baptism, they are
called to be disciples and missionaries of Jesus Christ. …Every baptized person receives from Christ, like the Apostles, the missionary mandate: “Go into all the world and preach the Gospel to the whole creation. Whoever believes and is baptized, will be saved” (Mk 16:15).

We leave hoping and trusting that the Peruvian diocesan priests, who will take over the reins of parish leadership from us, might continue to help our parish communities - all six of them - discover and live out their missionary vocation.

Fr John O’Connell has been a missionary in Peru since 1957. 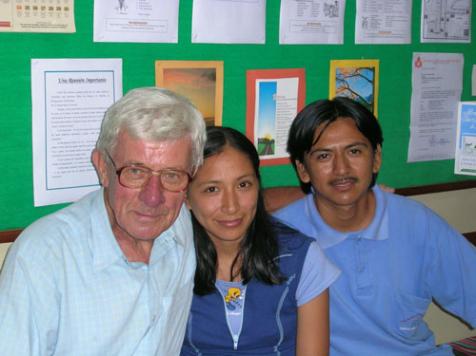