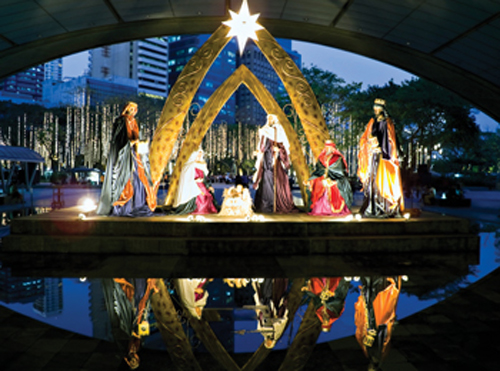 Fr John Keenan writes about his experience of Christmas in the Philippines.

Here in the Philippines, I normally hear my first Christmas carol around September each year. As soon as the monsoon season, with its typhoons and floods, begins to taper off, people start looking forward to Christmas.

By the time October comes, the joyful strains of Christmas carols are heard on the radio. Decorations, cribs, trees, stars and colourful and locally made wreaths appear in the shops and along the main roads. Being a climate that lacks major seasonal changes, fiestas and feasts like Christmas and Easter help to mark the passage of time.

Liturgical preparations begin with the lighting of candles and the blessing of the Advent wreath in late November. All is done in the local language - Tagalog. It’s a busy time with penitential services and confessions in the many schools and chapels. Groups of carollers go from house to house sharing the Christmas spirit.

The preparations begin in earnest on December 16 with the first Mass known as the Misa de Gallo (Spanish for The Rooster’s Mass) to mark the beginning of the pre-Christmas novena. Every Church throughout the country is packed to overflowing for the nine days of the novena leading up to Christmas. This custom dates back to Spanish colonial times, when early Masses were scheduled to accommodate farmers before going to reap the rice harvest, which is fully ripe at this time.

As early as 3:00am, the night silence is broken by the clanging of bells and loudspeakers playing Christmas carols. Nobody complains but prepares hurriedly and rushes to the Church to get a seat. The building inside and outside is bedecked with multi-coloured lights. A large flashing star welcomes the people in the relatively cool morning air.

Many people complete these nine early morning Masses not only to prepare for Christmas, but often for a sick loved one, to pass an exam, or get employment and for many other reasons.

One year as soon as I had finished one of these early morning Masses, a man from a neighbouring parish rushed in and asked me to go and celebrate Mass in their Church, as no priest was available. It was only after I had said ‘yes’ and was on my way that I remembered that I had already scheduled three Masses later that day, plus the Saturday evening Mass.

Some young Filipino priests regularly say up to six Sunday Masses in response to the needs of the people. The harvest is great but the labourers are few.

Midnight Mass is a joyful celebration. Everyone is dressed in their Sunday best. The Church is packed to overflowing. Many people from overseas are present, happy to be with loved ones and to give thanks.

When Midnight Mass is over, the congregation exchange Christmas greetings amongst themselves. Many buy Filipino delicacies which are for sale outside the Church. These include freshly prepared salabat (ginger ale), puto bumbong (pounded sticky rice) and bibingka (rice cakes).

People now return home for their traditional Filipino family Christmas meal of the Noche Buena. (Spanish for The Good Night and refers to Christmas Eve).

Family members are reunited and gifts are exchanged. Like in other countries, much is spent on clothes and gifts for loved ones. Early next morning “Santa” will arrive with gifts for the children.

The first Mass of Christmas Day is crowded once again to overflowing with many wearing their latest gifts. Soon afterwards, people begin to line up with their babies for baptism in the intense heat. There is no time for homelessness or thoughts of turkey and plum pudding. We are glad to have rice and chicken.

For us Columban priests, the Christmas season in the Philippines is very busy but also very meaningful. The happiness of the people celebrating at church and in family the birth of the Christ Child brings great happiness to us as well.

Fr John Keenan has been a Columban missionary priest in the Philippines since 1966.