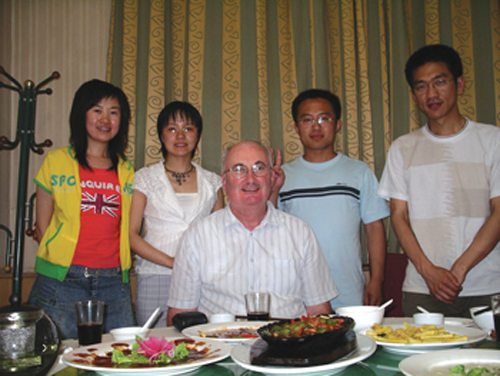 Fr Teddy Collins describes a busy, even frantic Christmas when he lived in Beijing, China. It was a day of many cultures, nationalities and languages.

We foreign teachers are given a holiday on Christmas Eve by the terms of our contract. I normally have two writing classes so I enjoyed the free time.

My free time was interrupted when the phone rang. It was the departmental office asking why I was not in class. I had told them, but somehow word never got through. They also reminded me that in the afternoon there was a student concert followed by a meal. But I didn’t go as I wanted to go to the department store to buy a connector which allows me to listen to my walkman using the TV speakers.

Later, I travelled across town to the Chilean Embassy to attend Mass in Spanish. There were about 70 people there when I arrived. The celebrant was a German priest and I was delighted to sing in and hear Spanish spoken as I recalled the time I spent in Chile. I arrived home just in time to receive a phone call from Dublin. My caller could hear the Messiah coming through on my TV speakers.

Christmas morning meant an early rise to cycle four miles to the Xi Tang or West Church for Mass in Chinese. It was very frosty (-6 degrees) so I was glad to get in doors. The Church was packed with a large number of men, women and children.

The crib had a painted backdrop of Chinese mountains but the figures were Western in style. The man beside me was in great voice for the Adeste Fideles in Latin.

Then it was back to my apartment to get ready for Mass in English for some foreign teachers. We were Canadian, Australian, Indian and Irish. One of our number is an excellent cook so we all went on to his flat for roast chicken, potatoes and vegetables - the latter prepared by two other teachers.

We were joined by a French teacher, a Scot and his Chinese girlfriend and a Japanese. Christmas pudding was served with brandy butter to an Aussie recipe - brown sugar instead of castor sugar. I got off lightly as all I had to do was to buy the wine.

Back in my flat I watched the news. It was my first time getting it so it was a nice present. Then I received two more calls from home so that ended a memorable day.

Columban Fr Teddy Collins first worked as a missionary priest in Chile and later spent many years in China as an English teacher. He is now retired to Ireland.