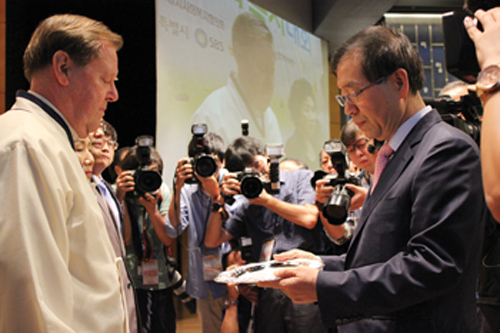 In September 4, 2012, Columban Fr Robert Brennan was awarded the City of Seoul’s Grand Prize for Social Welfare by the Mayor of Seoul at a public ceremony (above). In his address of congratulations, the Mayor said, “This blue-eyed foreigner is a model to all citizens of Seoul of selfless dedication and sacrifice on behalf of the poorest members of our city.”

After ordination in 1965, New Zealander Fr Robert was appointed to Korea where he arrived the following year. He has been there ever since.

Fr Robert’s first posting was at a Catholic church in Samcheok, Gangwon. A year later, he moved to a church in a nearby coal mining village in Jeongseon County and taught bible study while helping those in poverty for 10 years.

Through collecting donations, Fr Robert with about 30 residents formed a local credit union in Jeongseon in 1972 which has grown to a banking institution with assets of around 40 billion won ($35.2 million) over the past 40 years.

His contribution to Korean communities continued during his next posting that began in 1981 at the Mokdong Catholic Church in western Seoul. Fr Brennan opened the church gates for those who had been driven out of their homes for 1988 Seoul Olympics development projects without government compensation and formed a village for those without homes called the Mokwha Village in Siheung, Gyeonggi.

Fr Robert said it was a meeting with Bishop Ji Hak-soon, known for his pro-democracy activities in the 1970s when the country was ruled by Park Chung Hee, that led him to begin his community service work.

“It was Bishop Ji who sent me to a coal mining village in Gangwon to take care of those in need,” the 71-year-old priest said. “After watching him deliver a Mass that addressed social and political issues, I realized church must exist for people.”

Fr Robert has spent 46 years in Korea serving those in need. “I, have been evicted from my house three times. I will go anywhere if someone without a home needs my help,” he said.

Fr Brennan has run the Samyang Resident Solidarity for eight years now, which works to counsel those looking for jobs and also provides small loans.

Columban Fr Jim Fleming was honoured recently by the Birmingham Mail newspaper that designated him as Local Hero for his work in the city.

Fr Jim Fleming opened his home to people who can’t support themselves, spends his time visiting the sick and has helped people with crime and drug problems to turn around their lives.

He moved to Sparkhill in Birmingham, United Kingdom, 12 years ago after doing missionary work in Pakistan. He immediately jumped into a life of helping to bring together different religions in Birmingham using the languages he learned abroad as well as his experiences.

He took in failed asylum seekers who had been living on the streets and let them sleep in church buildings. Later, when he was moved to his current parish, St Catherine of Siena, he started taking people into his own home and currently has two people from Eritrea living with him until they can find a way to support themselves.

To date, he has offered a bed for the night to more than 100 people who would otherwise be living on the streets because they aren’t allowed to work in the U.K. and aren’t entitled to benefit payments.

Despite not having a car, Fr Fleming, travels across the city visiting sick people in Birmingham and Solihull, all at his own expense.

He said, “I feel very privileged, I’m not really sure if I deserve it. It’s nice to be recognized for what I do, and I’m very grateful for it.”