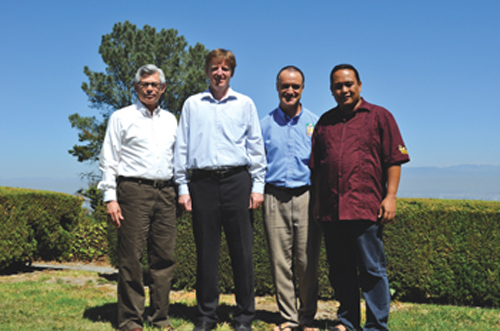 Fr Kevin O’Neill from Geelong, Victoria was elected Superior General of the Missionary Society of St Columban at the Columban General Assembly in Los Angeles, USA on September 20, 2012. Fr Kevin and his twin brother, Fr Peter, also a Columban priest, were born on the feast of St Columban, November 23, 1962.

Fr Kevin is one of the six children of John and Ruth O’Neill, of Manifold Heights, a suburb of Geelong. Frs Peter and Kevin’s sister, Kate O’Neill, is a religious sister of the Our Lady of the Missions Congregation. She is their Province Leader in the Philippines. She works with street children and those addicted to drugs, helping to rehabilitate them and reunite them with their families.

Growing up in Geelong, Fr Kevin says he and his siblings were inspired to work in overseas missions by the Vietnamese 'boat people' who arrived in Australia during the 1970s.

"Our family belonged to an organization in Geelong that welcomed Vietnamese refugees and once a month a young Vietnamese would stay with our family for the weekend," he says. "It was the first time any of the six O'Neill kids had mixed with people from another country and culture and we'd listen to them describe family life in Vietnam.

We'd share each other’s cooking, pick up a little of the Vietnamese language and try to teach them Aussie slang."

The visits by the Vietnamese to the O'Neill household continued over a period of four to five years and transformed the lives of Fr Kevin, Fr Peter and Sr Kate.

Fr Peter, however, was the first in the family to answer God's call to the priesthood. After attending two retreats with his brother while still at school, the elder of the twins began thinking about training to be a priest. After speaking with vocational directors of different missionary congregations, he chose the Columban Fathers.

"They seemed to speak directly to me and were so down-to-earth and from the start I was attracted to the challenge of their mission and their charism of crossing boundaries of culture, language and religion," he explains.

At the time, Fr Kevin was studying for a degree in chemical engineering at Melbourne's RMIT and although he admits he was curious about his brother's new life as a seminarian, he was unsure about his own future or what God was calling him to do.

"I was feeling deep stirrings and emotions I had never felt before but I wasn't sure if this was God calling me or simply my wanting to be with my brother," he explains.

For 12 months Fr Kevin remained conflicted, then suddenly, it all became clear. For the first time, he knew with certainty that he was being called to the Columban priesthood.

"It was my first adult experience of God and it had a lasting impact on me," he recalled. Two years after Fr Peter, Fr Kevin began his studies for the priesthood at St Columbans Seminary at Turramurra, NSW.

Fr Kevin was ordained in 1992 by Bishop Peter Connors at his home parish of Manifold Heights.

The two brothers were reunited two years after Fr Kevin's ordination when they found themselves working in Taiwan. There Fr Kevin ministered to the prison system, providing pastoral and practical care to the prisoners, the intellectually disabled and HIV positive inmates while Fr Peter worked with Taiwan's migrant workers helping protect them and their rights as well as offering them pastoral counselling and care.

From this, he founded the refuge centre for victims of labour trafficking in the Taiwanese city of Hsinchu where young men from Indonesia, the Philippines, Thailand and Vietnam are given shelter, support and legal advice.

After seven years in Taiwan, Fr Kevin was sent to Ireland where as a member of the Columban General Council, he administered the Columban Lay Missionary Programme and Co-Coordinated the work of 70 lay missionaries across 12 countries around the globe.

From Ireland, Fr Kevin was appointed the Columban Vocations Director in China, where each year he would travel across the vast nation speaking with students and young people.

Now as the newly-elected Columban Superior General, Fr Kevin will be based in Hong Kong where the Columban headquarters is situated.

But like his twin brother and his sister, Fr Kevin retains close ties to Australia and to his family in Manifold Heights. Every two years whenever possible he returns to catch up, exchange stories, support his favourite footy team, the Geelong "Cats" and touch base with the Vietnamese 'boat people' who spent weekends at the family home when he was a teenager and who have kept in touch.