A home not a shelter 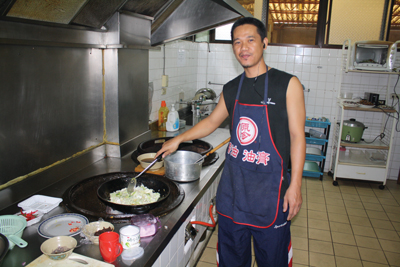 Thirty-one Indonesian, four Filipino, three Thai and two Vietnamese men and Columban Fr Peter O’Neill do their best to create a family-friendly atmosphere in their home in the Taiwanese city of Hsinchu. The 40 men are all victims of labour trafficking and their home is a shelter for such victims.

The men are awaiting the outcome of their court cases against the traffickers. Their average age is 25-years-old. Some are single and some are married. Fr Peter runs this shelter and supervises the court cases.

These 40 men, like other men and women migrant workers,  are the breadwinners for their families back in their home countries. To escape from poverty, their families had taken out loans of up to AUD$7000 (NZ$9100) from banks to be able to pay a labour broker to find them a job in Taiwan’s expanding economy that pays better than what they can earn at home. This is a lot of money for poor families.

Once they begin work, money is deducted from their salaries to pay back the loan and the rest is sent as remittances to their struggling families back home. Unfortunately the evil side of human nature often intervenes to try to cheat these poor workers out of an honest living.

Each of these men has his own story. Having arrived in Taiwan as legal migrant workers, they then fell victim of labour trafficking by their different employers. This means that they were locked up in their places of work and were  threatened if they left.

They were forced to work long hours for little or no pay and little rest. Later on they were rescued by the police and sent to this Diocesan shelter. Fr Peter calls this modern-day slavery. He founded this shelter in 2009 and has been living there with the victims of labour trafficking ever since. A native of Geelong, Victoria, Fr Peter is a talented sportsman and musician. His twin brother, Fr Kevin, is a Columban missionary priest in Hong Kong and their sister Kate is a Sister of Our Lady of the Missions in Manila, the Philippines.

When Fr Peter arrived in Taiwan as a Columban missionary priest 21 years ago, he used to take long walks after his daily Chinese language class through the industrial areas around the city of Hsinchu. He noticed large numbers of  Indonesian, Filipino, Vietnamese and Thai foreign workers. He started speaking with them about their difficulties at work such as long working hours, accidents and unpaid salaries. Out of these conversations grew his vocation to follow Jesus through standing up for exploited workers. 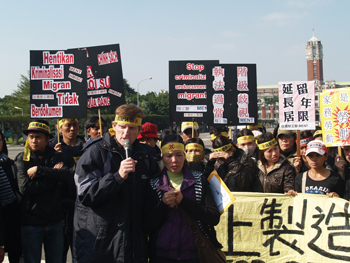 The rescued victims of labour trafficking arrive at the shelter as broken men. They are traumatized and psychologically damaged. While awaiting the outcome of their court cases, the men receive counselling and also work to pay off their debts and send money home to their families.

Fr Peter does everything possible to give the shelter a homely feel. Communication in the shelter is in Chinese. From 8:30am to 5:30pm, he works in the Diocesan Migrant Centre which organizes the court cases against the traffickers. He returns home to the shelter for supper at 6:00pm. He likes to get the men talking about their families back home and jokes a lot with them.

In the evenings, Fr Peter plays pool and ping pong with the men. Being a talented musician, he sometimes organizes sing-a-longs with them. Birthdays are also celebrated. If any of the men are sick, he takes them to the doctors. Computer classes are available in the evenings as well as Chinese and English language classes.

Living with 40 men from four different nationalities with distinct languages and religions while communicating through Chinese, a language foreign to them all, is quite a challenge. As the men do shift work, this means that some are trying to sleep while others are watching TV or speaking with their families by phone. This can be a cause of tension. Nevertheless, Fr Peter says that there is surprisingly little rivalry or problems between nationalities and religions. He says that there is no favouritism and that all are treated equally. Difficulties are discussed and solutions agreed upon at regular house meetings.

Peter encourages the men to practice their own religion. Catholics are encouraged to go to Mass at the local parish, Muslims to the local mosque and Buddhists to the local temple. The shelter has a special prayer room for Christians and another for Muslims.

Due to their cultural background, some of the men find it difficult to do domestic work, which they regard as women’s work. Nevertheless, Fr Peter tells them that the shelter is not a hotel and everyone must be involved in cooking their food and cleaning the building. Everyone must do his share of work.

In summary, Fr Peter says that his life is inspired by the example of Jesus, who did not discriminate against anyone and who stood up for the poor. The victims of labour trafficking are truly poor. They are modern day slaves to the greed of others.

Fr Peter says that it is very humbling to see the trust these 40 men have in him. It is for this reason that the Indonesians call him “Romo Peter” which means “Father Daddy”, the Thais call him “Po Peter” which is a term of respect for an elderly father figure and the Vietnamese and Filipinos also use respectful forms to call him father.

Fr Peter O’Neill has been Chaplain and Director of the Diocesan Migrant Worker Centre since 2006.