In the November/December 2011 issue of The Far East, we asked our benefactors for help in buying a new bus for children and adults with disabilities in two important Columban projects in Lima, Peru. Now the new bus is ready and has been blessed. 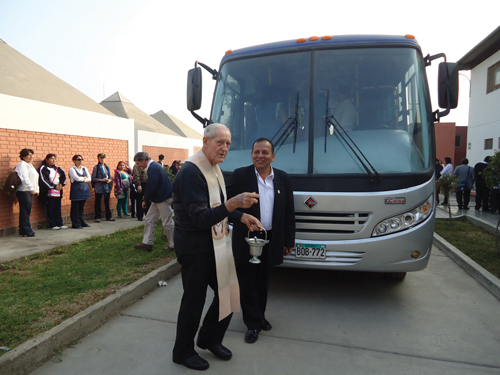 Having a physical or mental disability in a poor country like Peru is a cruel fate. As poor families do not have the means to help the family member with a disability, it can mean spending much of one’s life sitting in the corner of a room or lying still unable to move.

For the 60 years that the Columban Fathers have worked in the poverty stricken areas of Peru, they have been concerned about the fate of people with disabilities. This concern has led to the Columbans setting up two important projects.

Secondly, the Columbans set up the Centre called Association of People with Special Abilities (ASPHAD) for those over 18 years of age. While both projects function as autonomous organizations, they still have a strong Columban involvement.

These two projects have helped people with disabilities from poor areas. Parents can have their babies checked for developmental problems by experts at Manuel Duato. Many young children who suffer cerebral paralysis can now receive the necessary stimulation they need to be able to improve their quality of life at the school. The Manuel Duato School has over 60 teachers.

Likewise 40 adults with disabilities attend the ASPHAD Centre every afternoon. They participate in various workshops where they learn new abilities such as sewing, cooking and craft work. There are some participants who are in their 40s and 50s who have spent their lives confined to their homes, unable to enter into conversation. Now through the work of the Centre, they learn to speak confidently to one another or communicate in other ways and have a place to go to every afternoon.

Over time it became evident that one of the most serious problems for both places was a lack of specialized transport for those that required it. At Manuel Duato the families of the 27 children confined to wheelchairs find the cost of specialized wheelchair transport prohibitive as do many of the adults enrolled at the ASPHAD Centre.

To solve this problem, a special bus was needed to transport those who require it from either place. This bus would have to have an elevator for the wheelchairs and a space to store them when folded. The cost of such a bus would be well beyond the reach of both organizations.

Aware of this great need, Columban Fr Chris Baker set about raising AUD$90,000 (NZ$117,000) to buy such a bus. It would be used by both projects, the Manuel Duato School in the morning and the ASPHAD Centre in the afternoons.

About two thirds of the funds for the bus were raised in Australia and New Zealand. Other funds came from Ireland, Britain and the United States. The Far East magazine campaign as well as personal friends of Fr Baker and other Columbans played an important role in raising this money. 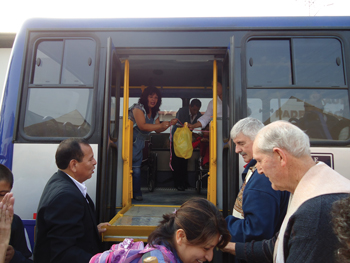 On Monday, June 25, 2012, the new bus was formally blessed by Columban Frs Ed O’Connell and Chris Baker. According to Fr Chris, many of the disabled students, their parents and their teachers were present in the large auditorium as the ceremony began. The shiny new bus had its place of honour outside the main door.

The principal of the Manuel Duato School, Mr Alicio Dominguez, publicly thanked all the wonderful benefactors from other countries who had contributed to the buying of this special bus for so many disabled children and adults in Peru.

After the blessing of the bus, the traditional bottle of champagne was broken by one of the mothers and  her young daughter in a wheelchair.

For Fr Chris and the Manuel Duato School and ASPHAD Centre, the next important project will be the construction of a garage to house the new bus. This is necessary to protect the bus from the elements and also to lessen the temptation to thieves well experienced in removing all or parts of any vehicle. The construction of this garage will be the new fundraising campaign.

Fr Chris Baker SSC has been a missionary in Peru since 1977.