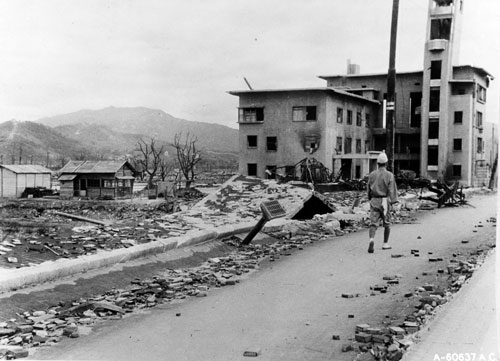 In early post-war days in Japan when newly arrived Columban missionaries in the parish at Kumamoto were still struggling to find their feet, they were generously assisted in their efforts by an able and supportive Japanese diocesan priest, Fr Isamu Hirata. Ordained a few years before the war for Fukuoka Diocese, ‘Sam’ as Columbans affectionately christened him, found himself in a rather bizarre way involved in the conflict.

One of his voluntary weekly tasks was bearing very limited amounts of strictly rationed food and items of clothing to foreign nationals stranded in Japan since Pearl Harbour. Without hope of repatriation, they were confined for the duration of the war in a camp some miles away from Fukuoka City. Since many members of the camp’s population were Christian, Fr Sam was able to provide spiritual nourishment and comfort for souls as well as for bodies.

Over the previous decade and now more than ever, the military authorities had viewed with suspicion any contact with foreigners of any nationality. In spite of being aware of this reality, and knowing that sooner or later the blow must fall, Sam untiringly maintained his weekly routine. He was not surprised therefore when one morning, answering his door bell, he found himself under arrest and marched to the nearby headquarters of the dreaded Kempei, the notorious military police.

Almost immediately the interrogation by a viciously loutish officer began. Six or more hours later when no satisfactory answers were forthcoming, the questioner suddenly lost patience. Whipping out his pistol from its holster and aiming straight between Sam’s eyes he barked Korosu zo! (I’m going to kill you). "Ok", said Sam, "go ahead and shoot. But take it from me, if you kill me, my ghost will haunt you and your children and every single one of your descendents and kin till the end of the world."

Minutes later Sam found himself unceremoniously bundled through the door and out on to the street with a strict if somewhat superfluous warning to "come back, no more, no more; never to come back no more" - a prohibition he was more than happy to abide by.

And they tell you ghosts have no power? Sam used to smile as, without the faintest trace of rancour, he related this and other wartime episodes and experiences to enthralled listeners. A shame nobody ever committed them to paper.

Columban Fr Eamonn Horgan has celebrated 60 years of ordination; almost all of those years have been spent in Japan.