An interview with Fr Brian Gore

Fr Brian Gore shares with our readers his work with the "Negros Nine Human Development Foundation" on the Filipino Island of Negros.

Tell us a little about yourself?

I am from Perth, Western Australia. I was ordained in 1968 and soon after assigned to the Philippines. When I arrived aboard the ship "Changsa" in Manila Harbour in 1969, I said to myself, "Oh boy, what have I got myself into now!"

I must confess that I never really learnt what it meant to be a priest and a missionary until I was sent to the island of Negros in 1972. I was struck by the conditions of the poor people of Negros so much that I already knew at once that I was on their side. It was during this decade that we began organizing the Basic Christian Communities (BCCs) as a response to the conditions of the poor. 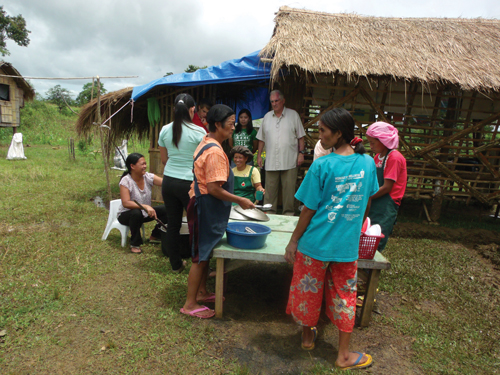 How did the Negros Nine Human Development Foundation begin?

It was founded in the year 2000 to continue the work of the BCCs who during the 1970s and early 1980s, were able to organize through non-violent means the protection of small scale holdings of subsistence farmers against the violent encroachments of powerful sugar interests that were trying to seize their lands.

How were the BCCs able to do this?

The BCCs were able to muster large numbers of people from several parishes in the area to occupy the land being seized and thus prevent the farmer and his family from being driven off their land. They also organized Marches of thousands of people across the land to protest and draw attention to the abuse and injustices committed against farmers with small holdings by the powerful.

So this movement came out of the local church!

Yes, the people living in poverty at a subsistence level, discovered a new way of being Church. They belonged to a People's Church, that is, a church where one expresses one's faith in God through concern for the life and death social issues of the area.

How did you become part of The Negros Nine?

In 1983, nine of us were arrested on trumped-up murder charges. This included six lay parish organizers and three of us priests: Filipino Diocesan priest Fr Vincent Dangan (died 1993) and two Columbans, Fr Niall O'Brien, (died 2004) and myself. We were imprisoned for 14 months. We were The Negros Nine. After the charges were dropped, I returned to Australia for several years.

When I returned to the Philippines in 1989, I worked for many years in the Manila area. It was only in 2008, at the age of 64, that I decided to return to the island of Negros to work with the "Negros Nine Human Development Foundation" and so take up where I had left off. 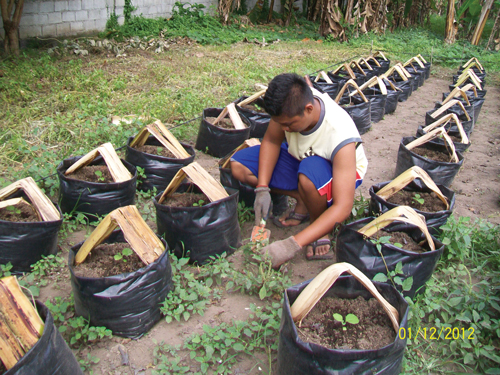 What have you done since returning to Negros?

I am involved in two commitments.

Commitment One: Previously many Columban priests worked in the Diocese of Kabankalan. I am now the last Columban priest remaining in the Diocese. Fifteen kilometres away in Himamaylan City, our former Columban headquarters has been turned into St Columban's Retreat House, which can accommodate up to 100 people. As it is located close to the sea and a river and is on a peninsula, it offers a beautiful setting for those groups from the Diocese seeking time out for prayer and reflection.

Commitment Two: One hour's drive from the coastal Retreat House up into the cooler mountains at 600 metres above sea level in the Bantolinao area, is the "San Columbano de Bantolinao - Negros Nine Demo Farm." This Demo Farm was set up in 2006 in this area where many families had been forced to leave their small holdings and migrate to the large cities in search of a better life, due to soil deterioration and erosion. The Demo Farm was set up on 12 hectares to help the local farmers learn sustainable agricultural methods and organic farming. Later 75 hectares of land above the Demo Farm was bought for a reforestation project. To date, 40,000 native trees have been planted here. Native birds and bats are now returning to the areas. Local creeks and natural springs are coming back to life.

The "Negros Nine Human Development Foundation" also is strongly committed to fighting the trafficking of people. Due to the poverty this is a problem even with minors in this remote part of the island of Negros.

What are some of the income generating schemes used?

We have developed an abaca cloth weaving industry. As there is a great demand for organic products, we are able to sell our produce at the Organic Farmers Cooperative in Kabankalan for restaurants and other markets. We have 10,000 native species in our plant nursery. We also have a talapia fish pond and are growing our own organic coffee, fruit and vegetable. 115 families belong to the Cooperative. 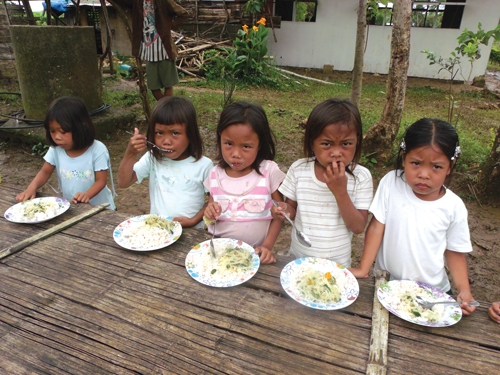 There are two. We have now supporting a primary school with 154 students which goes through to Year 5 and will later continue on to and include a Secondary School. We are able to offer a nutritious meal to the children for 200 days of the year. As a result of the school lunch, school attendance is practically 100%.

Secondly, we have built a Shrine to all missionary groups who have ever worked in the Diocese of Kabankalan. There is a large stone chapel with a statue of St Columban outside. We are developing this chapel as a pilgrim site. It will also include an organic restaurant, meeting rooms and conduct guided tours of the rainforest.

Columban Fr Brian Gore has been a missionary in the Philippines since 1968.