Columbans back in Myanmar

Columban Fr Pat Colgan writes about a new Columban chapter about to begin. A team of Columban missionaries will begin work in 2015 with the Kachin minority in Myanmar where Columbans who had previously worked from 1936 to 1979.

St Columban's day 2014 came early in the hills of Kachin State. Over 2000 people had already started boarding trains for the 3 day journey to Yangon, the capital of Myanmar, for the upcoming national 500th anniversary celebrations of the arrival of the Catholic faith (initially through Portuguese traders) due to be the held the following weekend. So it was decided to have the local diocesan Jubilee celebration, an ordination to the diaconate and St Columban's Day (patron of Myitkyina diocese) all on the 15th November. 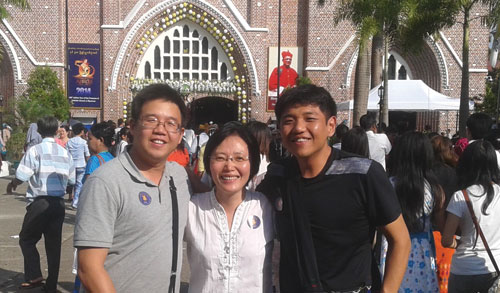 About 3,000 representatives from many parishes gathered in the early morning at Edin, the large piece of land containing St Luke's Catechists' school (founded by Australian Fr Bernie Way) for Mass at 730am. We were led by a loud Kachin marching band to the grotto prepared for the outdoor celebration.

What followed was a mixture of the Roman Ordination Rite, a Kachin gong ceremony, a colourful offertory dance and further entertainment after Communion, including an unusual and poignant item from some young men dressed in both cultural and paramilitary fatigue with symbols depicting the Kachin dream to have a homeland under local administration. This potentially risky gesture, given the precarious stage of ongoing negotiations between the Myanmar Government and Kachin independence groups, occasioned both loud cheers and quieter tears. (Three days later, the Myanmar army dropped a bomb on a KIA training camp in nearby Laiza killing 23).

After the entertainment, words of thanks and the Bishop's final blessing, all either went to a dining room or received a lunch box with rice, pork (ten pigs had been either bought or donated for slaughter), other curries and, for the chief guests – Columbans and Kachin elders, fermented rice wine poured from bamboo stalks. A number of the elders had been students of St Columban's College before it was 'nationalised' by the military in the early ‘60s and attributed their careers in politics, the civil service and their people's independence struggle, to the good English taught them by the "Irish Fathers".

We then waited excitedly for the start of the St Columban's Cup Football final at the Edin ground, the prizes for which we had donated this year. 17 teams had been whittled down to a final between Edin (the hosts) and Yuzana sub parish. Edin made an impressive outing, winning 3-0 and received their cash prize along with the winners of the badminton, volleyball and caneball competitions. These sports tournaments are seen by the diocese as an important plank in their drug rehabilitation and youth ministries. Opium production and use is unfortunately a major problem in Kachin State, exacerbated by both poverty and the ongoing political conflict. 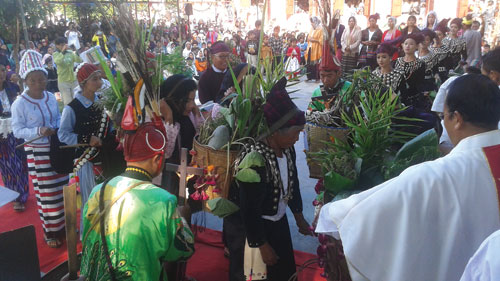 It seemed very fitting that two anniversaries - the 1400th at the death of St Columban and the 500th year of the presence of the Catholic faith in Myanmar – were celebrated together in the year when Columban missionaries are preparing to reopen their mission among the Kachins. In my few words at a welcoming ceremony that evening for two newly ordained Korean Columban priests, Carlo Jung and Jehoon Lee, who have been assigned there, I shared that although the Society does not have the big number of young priests that it did before, we are happy to send "from our poverty" what we have to the Kachin people, knowing that it will once again be a blessing for both of us. I hope the four Columban priests, resting gently in the nearby cemetery, would have smiled at that and will guide our new team of priests and lay missioanies to many more good St Columban's Day celebrations among these determined but gentle people.

A visit to an important Columban site

In the days after the celebration, Bishop Francis Daw Tang of Myitkyina, Myanmar, was anxious that the two newly assigned priests and myself, visit one of the sites of the original Columban mission among the Kachin people.

We drove 27 miles north to Tanghpre, a scenic spot where the Mali and Nmai rivers form the 'Confluence' of the famous Irrawaddy River. I quote the following from The Far East article of January 1962 of Fr Laurence McMahon, himself a missionary in Burma at the time:

"Tanghpre is a powerhouse of Columban activity. Fr Bernard Way from Melbourne, runs not only a Catechists training school but also the Catholic printing press. The press, like Fr Way, is never idle. From it flows a monthly paper, the Jinghpaw Kasa (" Kachin Messenger") plus a constant stream of Catholic books and pamphlets. The press gets it power from a diesel generator; none of us has ever been able to figure out where Fr Way gets his energy! Like all our parishes here, Tanghpre is vast and includes a mountainous district called "Hpungyin Dung" which is every bit as formidable as its name suggests; some mountain tracts here are so deep that even the Kachins call them "steep ascents that make the children cry..."

We heard the stories of many other Columbans on our way back to Myitkyina, the fidelity to their people – Thomas Walsh, dead from malaria at 34; John Walsh, 43, shot through the head and found in a shallow grave; Thomas McEvoy, 56, who collapsed and died climbing to another village for Christmas Mass. With such a foundation, this new chapter in our walk with the Kachins will bring its own joys and tears as together we join their long struggle for the dignity and the rights they believe that God, if not yet the Myanmar government, wills them to have.

Donate to support the work of the Columban Fathers