A short term mission experience in the Pacific 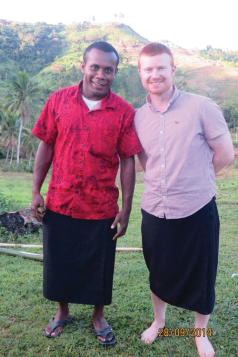 Short Term Mission (STM) experiences have always been offered by Columban Missionaries in many of the countries where they work. In the article below, Patrick O’Dwyer, nephew of Columban Fr Frank Hoare, writes of his Short Term Mission experience with the Columbans in Fiji and the Philippines.

Columbans are in the process of developing Short Term Mission experiences in Chile and the Philippines.

Fiji for me will always be one of the most wonderful places in the world. I never expected to end up in Fiji, in the middle of the Pacific Ocean surrounded only by a vast expanse of water. It's almost impossible to get further away from Ireland, my home country. Yet that is where I found myself, living among the Columban Fathers in Fiji, a kind and good humoured bunch of priests from Ireland, New Zealand, Peru and most recently South Korea.

My journey really started during my studies the previous year when I met my 'momo' (uncle in Fijian) Columban Fr Frank Hoare in Ireland.

I told him that I wanted to work in development, perhaps in Africa. He was quick to suggest Fiji, yet at the time I knew nothing about the country other than it was a famous honeymoon destination. I took him up on the idea. The following September 2014, I arrived in Nadi and spent the next four months living in the capital, Suva, occupying the Columban Father's Bula Suite (welcome suite in Fijian).

My first four months in Fiji were spent helping out in any way I could and learning as much as I could about the social justice and economic development issues facing Fijian society. My momo (Fr Frank) told me that the Columbans were interested in developing some type of shorter term lay volunteer model and he was interested in how things with me would play out. In an effort to help me better understand Fijian customs and traditions I was paired up with a prospective Columban seminarian, Meli Nanuku. We worked together over the next four months, visiting Non-Government Organizations (NGOs), researching their focus and activities and writing a report with the intent to inform the Social Justice and Development Commission of the Archdiocese of Suva about the major issues facing the country. This was an extraordinary learning experience for both of us, as well as the beginning of a fruitful friendship. 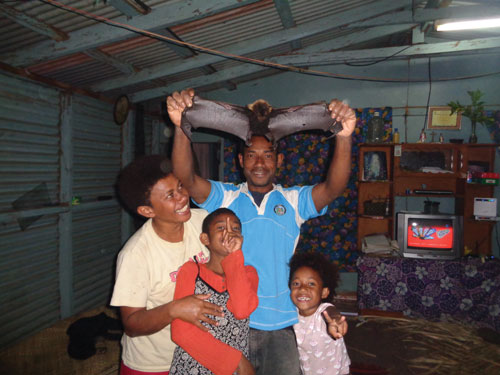 Of course I had to do more than this alone to 'earn my keep'. My other duties included fetching fresh bread and making sure there was always bread for breakfast. While in Ireland we put the bins out only once a week, in Fiji my other duty was to rise early and put the bins out three times per week. I also became the house driver during my four months. I would drive the kitchen staff, Naomi and Sala, home in the evenings, collect the post twice a week, drive any of the administrative staff on any of their errands. Within days of arriving I felt comfortable there, and by the end of my stay, it felt like family.

One unexpected duty came in the form of a good humoured patient. Roughly half way through my stay, the Columban Director Fr Donal McIlraith slipped and split a muscle in his leg. After a rather invasive surgical operation he was left unable to walk and in need of care. I then became a live-in nurse and physiotherapist. As he began to heal and strengthen, he took me on visits to the settlements at the edge of the city. These settlements were the equivalent to slums in other countries, where the urban poorest lived. We met the Catholics in the community, discovered which families wanted their children baptised and organised their special day at the church. As he got stronger I assisted him on visits to families seeking counselling, visits to families who had just lost a loved one, different churches to say Mass, and brought him to and fro from his Scripture lectures.

With all of these unique experiences, it felt like I was becoming a missionary priest's apprentice! It's fair to say my volunteering experience in Fiji involved me wearing many hats, and assuming many different roles while coming to a deep and profound understanding of a culture completely different from my own.

Seven Months in the Philippines

After staying almost four months, I departed for the Philippines to continue volunteering. Coincidentally I spent the next four months volunteering with an NGO called PREDA (People's Recovery Empowerment Development Assistance) which is run by a Columban priest, Fr Shay Cullen. This was also an incredible experience, where I worked alongside some of the most inspirational people I have ever met. I worked with youths in conflict with the law and I was involved in jail visits aiming to find youths as young as 11 or 12-years-old behind bars. PREDA, among other activities, rescues youths from prison cells which at times could hold up to twenty teenagers in one large room, then it offers a diversion programme where they can continue their education, practice sport and have their legal cases supported.

Following my time at PREDA, I volunteered as a labourer with an NGO called All Hands Volunteers building houses in Tacloban, a city on the island of Leyte, devastated by two consecutive hurricanes. I volunteered there for two months. Luckily I was given a free volunteer visa, as well as free food and accommodation by the NGO in exchange for a six day work week. Heavy duty labouring was tough work, but allowed me to lose some kilos I had put on in Fiji!

Returning to Fiji to realize the vision 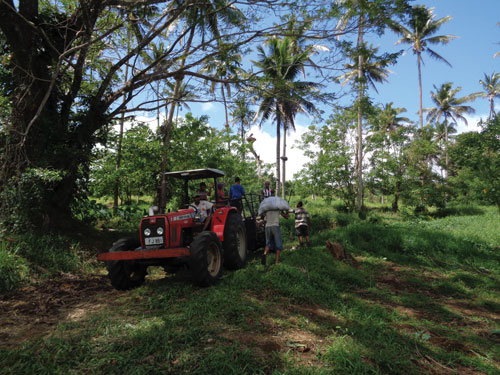 After seven months in the Philippines I returned to Fiji to begin a small project Meli, the seminarian and I had been planning. During our time researching NGOs, we had learned some very interesting things in the area of income generation. Honey demand in Fiji is high, yet production is low, so Fiji needs to import much of its honey. This is needless given Fiji's climate and capacity to produce honey. We learned that an investment of $3,000 Fijian dollars (FJD) to purchase panel and hives could give an annual return of $5,000-6,000FJD annually. This is substantial given that the minimum wage is roughly $80FJD per week. We also learned from Conservation International that Fiji needed to plant trees to prevent flooding and the death of its coral reefs from mud flows. One of the trees they encouraged people to plant was called sandalwood or in Fijian, yasi. We discovered that a twenty year old tree could be sold for anything between $5,000FJD and $15,000FJD.

We planned on creating a type of Ireland – Fiji partnership where some capital from Ireland (my family and friends) could initiate some income generation that could bring a return. This plan brought me back to Fiji and up to Namataveikai, a beautiful village in the province of Ra. Here I was given a taste of the reality of village life. I stayed in the village for two weeks and bought four double-set bee boxes, with bees included, along with some training from a local company called McKenzie Beeline. This company also offered to buy our honey which brought our business model to a completion. While there we talked a lot about sandalwood, how it's grown and it's income potential. Meli's family constructed a nursery made solely from bamboo and coconut leaves. Now, once we start to see profits from the beehives they plan to buy seeds for the sandalwood nursery. We divide the bee-hive profits 50-50, I hope to save my share to buy a honey extractor, which will double the value of the honey we produce. Meli plans to put his 50% share into a fund to build a Catholic church for his village. Jokingly he told me he'll name it St Patrick's.

The last part of my return visit to Fiji included a week long visit to the Tutu Rural Training Centre, run by the Marist Fathers, in the island of Taveuni. This visit has to be one of my favourite experiences during my time in Fiji. At Tutu farmers are encouraged to become responsible members of greater Fijian society and not only responsible for their immediate family and village. Being responsible for greater Fiji encourages these young farmers to reach their potential and make their farms productive enterprises. Farmers learn to manage their time, treat their farms like a business and have goals such as a five year plan. When they do this they can do very well and produce the food to feed a nation.

At Tutu young farmers must plant a set number of yangona plants (which is much in demand as a non-alcoholic social drink) each year in order to be enrolled. At the end of their three year course they can harvest their plants and sell them from anything between $20,000FJD to $40,000+ FJD. This capital gives them the start they need to build a house, buy machinery and attract a wife.

At present I'm living in rural Guatemala, volunteering with an educational organisation called Lichutam. It's a different culture, different language and a different feeling, but like my other homes, the mosquitoes are as annoying as ever.

Columbans are developing Short Term Mission experiences in Chile and the Philippines. We would be interested to hear your feedback regarding the proposed programs for the above countries.