Poni risks her life for her younger sister

Like many of the poor in Pakistan, Poni suffered a tragic accident. Columban Fr Dan O’Connor writes of her accident and his involvement in her recovery. 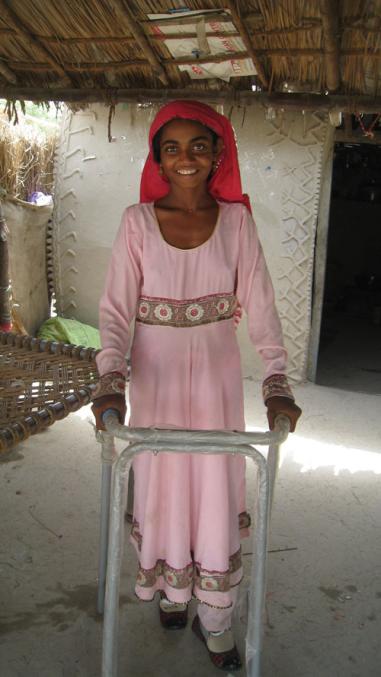 Poni is a 17-year-old Hindu girl, a member of the impoverished Parkari Kohli tribal community that live in the arid Sindh province of Pakistan. Like the majority of girls who live in the Sindh province, she has never been to school. Her father, Krishan, is a landless peasant farmer, who cultivates land for a landlord, waters and harvests his crops of rice, cotton and sugar cane. He then receives a meagre share of the crop to feed his family.

There is a railway line that runs through Poni’s village. On the other side of the railway line is a pond of fresh water, used to wash clothes and cooking utensils and for the buffaloes to drink from and to wallow in.

The train ran over Poni’s feet and dragged her along the line for some distance. When it halted, a large crowd from the village including her family gathered. Her father, Krishan, picked up his daughter, thinking she had been killed. He then noticed that she was breathing ever so slightly. He carried her to the main road where he managed to hire a vehicle to take her to the hospital at Badin, a distance of 12 kms. Poni’s uncle and the train guard accompanied him.

At the hospital emergency ward, she was pronounced dead by the doctor, who asked whether the family wanted a post mortem. Krishan replied that he did not want a post mortem. He then thought he saw Poni take a breath. As he lifted her up from the stretcher, she said in a soft voice, “Abba Ji (Daddy Sir), give me water.”

The doctor was amazed and immediately began emergency treatment by administering a reviving drip. He then gave Krishan a referral letter for the Civil Hospital in Hyderabad. Krishan then paid for an ambulance to take Poni, himself and the train guard the two hour journey to Hyderabad.

On arrival at the hospital, the train guard asked Krishan to give him the doctor’s referral letter, with his thumbprints on it and his National Identity Card. He promised to use these documents to get free medical treatment for Poni from the Railway Department. Krishan handed everything over to the guard who then disappeared and was never seen again.

After waiting several hours, Krishan and Poni were now in a desperate state, with no hope of admission to the hospital. Finally, a man from a local political party, took up their case and managed to have Poni admitted. Treatment at the hospital lasted for 20 days with Poni’s family staying night and day at her side, bringing her food which is the practice in these hospitals. At the end of treatment, Poni was brought home by Krishan where the family continued to change her bandages and care for her.

I first heard about the plight of Poni from parishioners one Sunday after evening Mass. “This tribal girl had her feet cut off when the train ran over her feet,” they told me. When I heard this I was deeply moved.

I then informed the parish’s Health Team who went with me to visit Poni in her village. We brought her to see a local doctor who said to take her to the Jinnah Hospital in Karachi. We have an important contact in Karachi, who fights for the rights of the poor and sick. With Columban help, she organized to have Poni admitted to hospital, where they amputated the rest of her feet. After this, we managed to have her admitted to another hospital for plastic surgery.

Some weeks later on one of my visits to Poni in hospital, I noticed her jaw was jammed and her teeth closed. The family told me that they managed to feed her by pushing soft food through her teeth. I spoke with the authorities who some time later operated successfully to release her jaw.

Then when the stubs of her two legs had been healed sufficiently, it was back to Karachi for the fitting of shoes with supports. Poni, with the aid of helpers took a few small hesitant steps with a smile radiating from her and those attending her. Throughout her journey Poni always smiled whenever I met her. Now it shone ever more brightly. With practice she is now able to walk even without the supports and collect water again.

Recently Poni said to me, “I am very happy that I now have a new life and am able to walk again. I had felt so sad and upset when I lost my feet. Thanks so much to Fr Dan and all the Columban supporters and everyone who has helped me.” 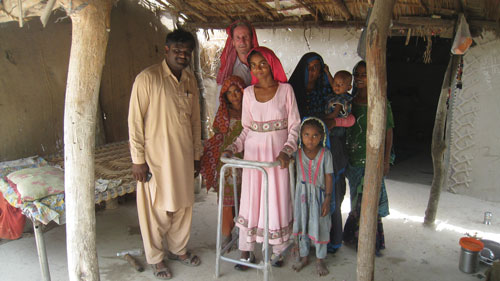 P.S. Recently the brother of Poni's stepmother lost his two legs in an accident with a wheat thrasher harvester - one leg was lost above the knee and the other below the knee.

Columban Fr Dan O'Connor has spent many years in Pakistan as a missionary.