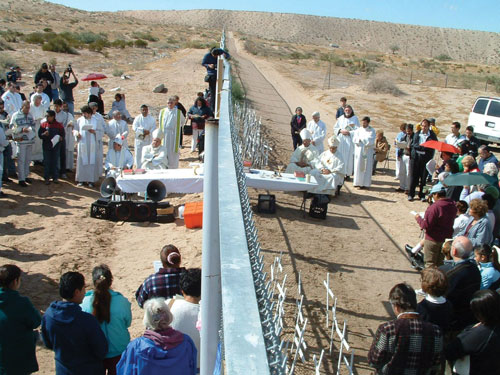 Every year on All Souls Day, November 2, a Eucharist is celebrated at the high fence which runs along the Mexican/United States border. Mexican Catholics from the city of Juarez and American Catholics from El Paso, Texas, and Las Cruces, New Mexico, come together each year to pray for the souls of those who were murdered or who died of hunger and thirst while attempting the crossing of the border from Mexico into the United States. While some bodies have been found, many others are still missing. On this occasion we also pray for the living. We pray for all migrants, for justice, peace and respect for human dignity, and for the unity of the Mexican people.

I’ve been attending the “Border Eucharist” from the Mexican side of the 11-foot-high fence for the past four years. Our Columban parish of Corpus Christi is close to the spot where the Eucharist takes place every year. The first time I took part in this Eucharist after arriving in Mexico from Fiji, I could not yet understand the Spanish language and I didn’t know anyone. I could not help but observe, however, the presence of agents from the United States Border Patrol on the American side and from the Policia Federal on the Mexican side. These agents from both countries carefully monitored the celebration of the Eucharist by local bishops and priests and hundreds of faithful from both countries.

I was deeply moved when I saw people giving each other the Sign of Peace through the international fence. I saw a lady in front of me extend her hand out and put her fingers through the fence in order to touch people on the other side. I heard her say, “Peace be with you” to a person on the Unites States side.

I said to myself, “O my God, when You created the Universe there was no division, and during our Sign of Peace we overcame division.” The international fence divides us, but during the Eucharist we are united in communion, as one family. It was a powerful symbol.

Now, after living in the parish of Corpus Christi for the last four years as a Colulmban Lay Missionary and learning to speak Spanish, I have been able to build strong friendships with the parishioners. I have come to have a good understanding of what life is like for our parishioners.

The 2014 Border Eucharist was held on November 22, instead of All Soul’s Day. The bishop of Las Cruces, New Mexico, the Most Rev. Oscar Cantú, was the main celebrant at that Eucharist. I was struck by his homily, especially when he said, “We are all migrants and citizens in the Kingdom of God.”

These words reminded me of a day when we were standing on a high hill nearby, where a large statue of Our Lady was located next to a chapel under construction. I asked the three parishioners with me whether they originally came from the city of Juarez.

They all replied that they were from other parts of Mexico. I said to them that none of us are originally from here. “I am from Fiji and our parish priest, Fr Kevin Mullins is from Australia.”

One of them replied, “Yes, we came from other parts of Mexico, looking for work and thanks to our Catholic faith, we are now a part of the local parish community. Some people cannot find work here and, seeking to improve the lives of their families, try to cross the border fence. But God created the Universe without divisions or borders. It was human beings who made these divisions that separate us.”

I said to them, “Imagine how it will be in heaven! I don’t believe that God will divides us, say, ‘You, Mexican, go to this side! You Fijian, go to that side!’ We are all His children. We are one and equal in God’s House.”

Being a Fijian Columban Lay Missionary among the Mexican people, and living at the border between the United States and Mexico, I feel, experience and see that, through the language of God’s love, He brings us together as one body and one family, since God loves us equally.